NCAA has released its March Madness Live app for iPhone, iPad, iPod touch, and select Android devices. The app comes with free radio streams of all games as well as social features, brackets, and notifications for upcoming games and possible upsets. Live streaming carries a $3.99 premium, but for that price you'll get to watch games live on your computer as well.

Just in time for "bracketology" comes the new NCAA March Madness Live app for iPhone, iPad, iPod touch, and Android devices. The app is free, and you'll get access to radio streams of all the basketball games as well as plenty of social features, since that's the thing to do nowadays. However, unlike last year, you'll have to pay a $3.99 premium to get live streaming of all the games to your phone. Thankfully, that price includes streaming on your computer as well.

We took the opportunity to play around with the Android version of the app for a bit, and the first thing you'll notice is that only a select few devices are supported. Officially, you'll need either a Rezound, Nitro HD, Thrill 4G, Droid Bionic, Droid RAZR, Droid Charge, Galaxy Note, Epic 4G, Galaxy S, or Nexus S 4G if you want the "best viewing experience," but we managed to get the app up and running on a Galaxy Nexus, too.

All that aside, the app does feature plenty of functionality: there's a full bracket, and each game is clearly marked with what TV station it'll be broadcast on. If you select a game, you get an information panel that shows what people are tweeting about. There are also notification options that'll let you know when a game from your favorite team is coming up or if an upset is in the making. All the features are well and good, but the app is heavily laden with advertisements (for LG's Nitro HD, no less) and performance was a bit sluggish on the Droid RAZR we tested the app on. Still, streaming every game live to your phone for $3.99 isn't a bad deal — even if it was free last year. 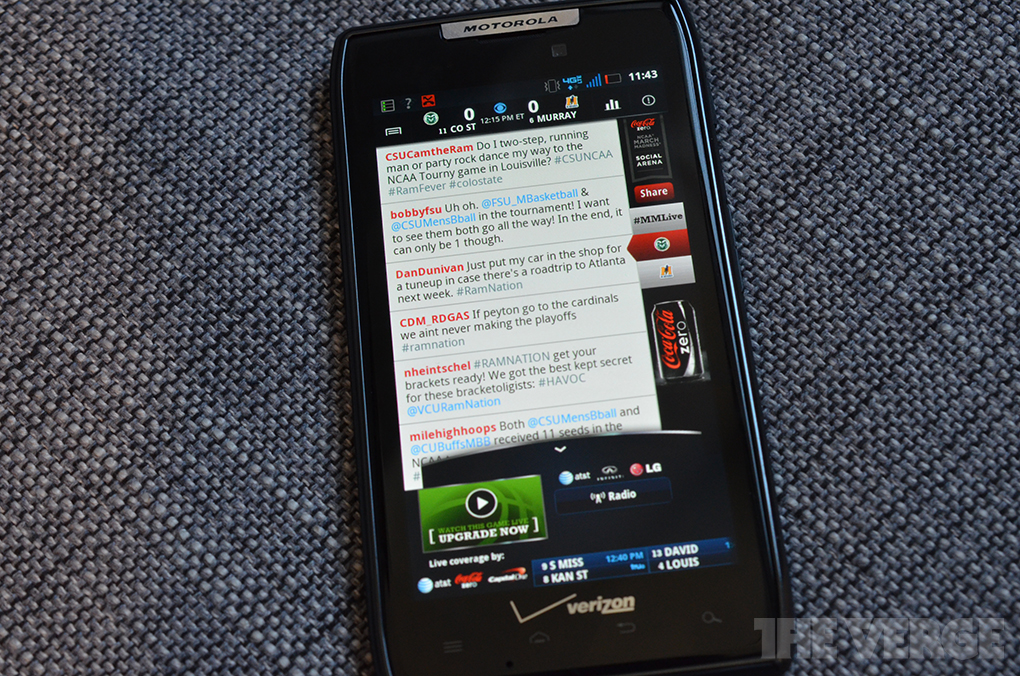