NASA and GM team up for Robonaut-inspired cyborg glove

GM and NASA have developed a robotic glove, which could reduce repetitive stress injuries for both astronauts and auto line workers.

Share All sharing options for: NASA and GM team up for Robonaut-inspired cyborg glove

NASA and GM are working together on a robotic glove that can help make working with your hands a little easier. Officially called the Human Grasp Assist device — but also known as either K-glove or Robo-glove — the glove reduces the amount of force needed while using a tool, which decreases the chance of repetitive stress injuries. This is important for both NASA and GM, as the glove could potentially be used by both astronauts and auto assembly workers who handle tools for long periods of time.

The two organizations previously worked together on the Robonaut — which recently managed its first handshake in space — and the glove actually borrows some of that technology. It includes actuators in the fingers for a better grip, and pressure sensors to determine when you have a tool in your hand. Right now the Robo-glove weighs about two pounds and can reduce the amount of force needed for a given job by around half. So if a job takes 15-20 pounds of pressure, it could be reduced to as little as 5-10 pounds. The team is currently working on its third prototype, which will focus on making the glove smaller and lighter — so it looks like we'll still have to wait a while to get stronger through Deus Ex-style human augmentation. 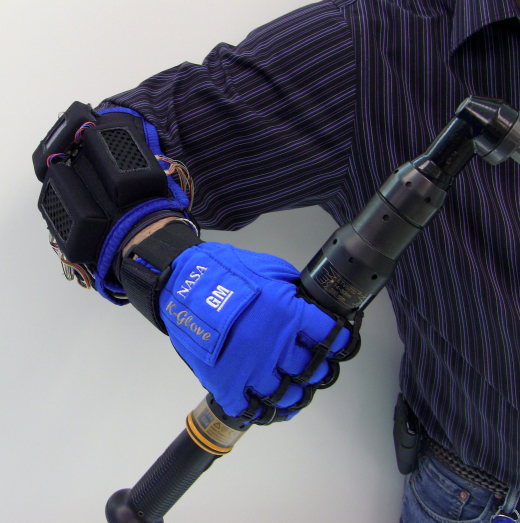