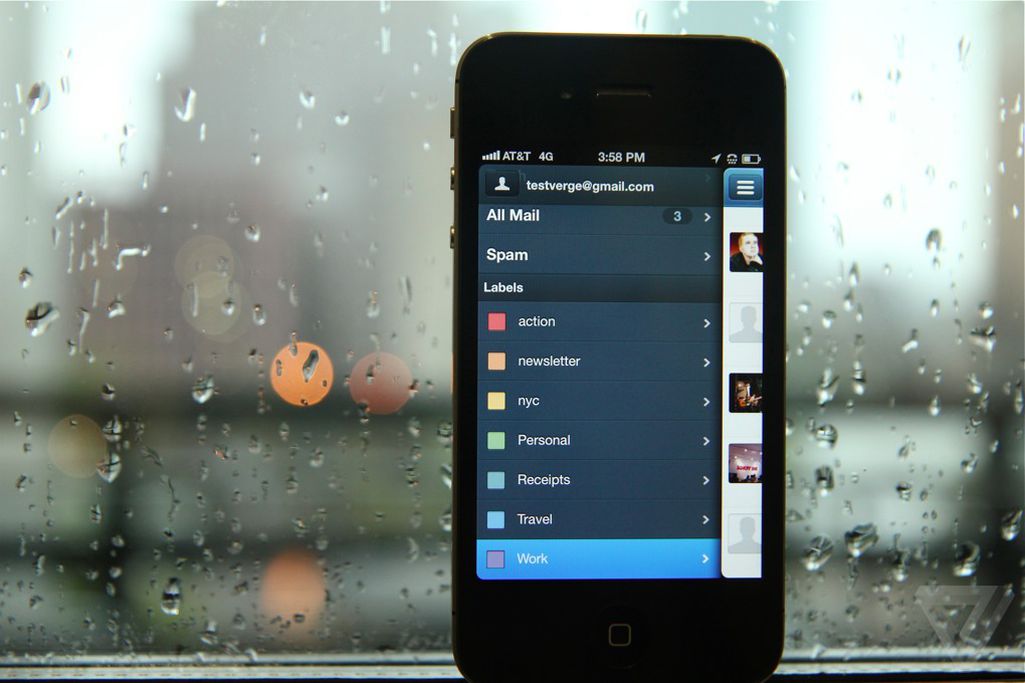 The desktop version of the Sparrow email client debuted just over a year ago, offering excellent Gmail integration with labels, multiple accounts, and a Unified Inbox. It wasn't a huge change in how email works, but its cleaner, streamlined interface offered a respite from the busy Outlook or Mail desktop clients. Sparrow gained a dedicated following with users looking for a client for quickly clearing an inbox.

New apps launch almost daily promising to forever disrupt how we read, shop, share, and even meet other people, but email's proven surprisingly resilient over the years. Still, while the basic idea hasn't changed all that much since the first was email sent on ARPANET back in 1971, the volume has gone up dramatically. The 2004 launch of Gmail was one a huge development for dealing with the flood; the incredibly fast — and searchable — webmail client was a boon for users tied to increasingly clunky native email clients. On mobile, while Android users have had the pleasure of a native Gmail client, iOS users have only had Apple's Mail app.

On iOS, though, a native Gmail client remained the holy grail for many users, until Google's uninspired and buggy Gmail client (little more than a wrapper on the web site) finally came to the App Store last year. Confirmation that Sparrow was working on an iPhone app offered a glimmer of hope for many disappointed by a Gmail app that to this day lacks multiple logins.

In spite of dashed hopes, last year's release of Gmail for iOS at least signaled that Apple may have changed its attitudes towards apps that duplicate iOS functionality — specifically mail apps — and Sparrow's launch on iOS today means Mail finally has some real competition. I've been using it as my primary mobile email app for about a month now. Does it hold up as a Mail replacement? Read on!

Sticky TOC engaged! Do not remove this!
Video 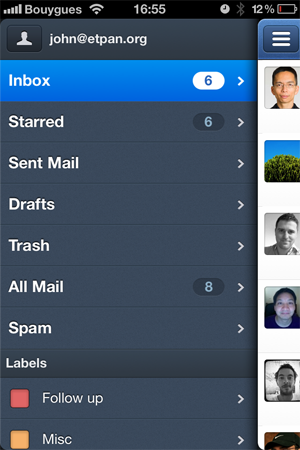 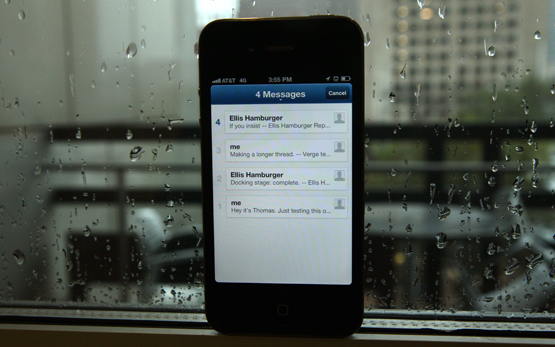 While Mail generally works fine if you're just reading and responding to a couple emails, things start to fall apart if you want to label, sort, and deal with a regular day of messages. Navigating between folders and accounts is a game of digging back several times, scrolling around, finding the correct folder, and tapping forward again. Dealing with a full inbox isn't even worth it most of the time, and adding labels feels like a hack at best, because you're forced to move the message to a folder masquerading as a label. Needless to say, Mail lacks the ease of using Gmail — or even the desktop version of Mail — on your desktop or on an Android device, and Sparrow goes a long way towards dealing with your day-to-day mail management.

Sparrow is built around quickly moving, replying, and sorting messages, and integrates mobile design ideas from Facebook, Twitter, Gmail, and even Mail. From Facebook's recent mobile app, Sparrow notably takes overlapping panes (or cards) for navigation. The lowest level gives you access to all your accounts, settings, and a unified inbox. Tapping into any of the accounts shows you that individual account's specific labels, drafts, and starred mail, and selecting any of these reveals that full inbox or label. In addition to dropping Mail's odd split Inboxes and Accounts approach, this makes it much faster to get to the label or inbox you're looking for or move from one account to another.

Sparrow dropped the bottom navigation bar you see in many apps, freeing up more space to read and browse when compared to the Mail or Gmail mobile apps. This gives Sparrow a slightly higher information density, showing five and a half messages on screen at once compared to Mail's four (at two line previews). A minor thing, sure, but it shows an attention to detail and willingness to drop some of the conventions of app design for a better experience.

Dom Leca and the Sparrow team's understanding of the daily flood of email that many of us deal with is reflected in the app's design, with subtle notes like an "Inbox Zero" marker that appears when you clean out an inbox.

More importantly, the Unified Inbox is truly unified: you'll find Sparrow offers other unified sections, including Starred, Sent, and Drafts. For example, if you've got multiple mail accounts and use stars to keep track of items you need to respond to, the consolidated Starred section saves you from jumping between work and personal accounts to find what's important. It's a simple idea — all your important email in one place — that's rare in mobile email apps.

Sparrow smartly uses Twitter's idea of swiping on an individual message to take action on an email without opening it up. Swiping left on an email gives you the options to reply, star, tag / label, archive, and trash inline — no need to deal with Mail's account-specific requirement of either trash or archive. Similarly, the Edit button at the top right of the app gives you easy options for bulk moving, archiving, deleting, and marking as read. Absent in Mail, the nearly ubiquitous pull-to-refresh action can be used in any list of messages in Sparrow.

One of the app's best UI ideas is its implementation of threaded messaging, which lets you quickly swipe up and down between responses or see an entire email thread at a glance. In the message view, a title indicates which response you're reading and how many are in the thread, and a tap pulls the message back to reveal the entire exchange, whether it's four messages or 40.

When reading a message, reply by tapping the icon in the top right or the menu on the bottom right or the bottom right menu, which also lets you archive, star, forward, and trash. Noticeably absent is a way to add labels from inside a message; instead, you have to move back a screen and right swipe on the message. Tapping Compose greets you with a full screen prompt for a recipient that requires you to select a contact before moving forward, which feels like an unnecessary extra step. Once you hit Next, you can change the account that you're sending from, by just tapping the the From: line at the top of the screen.

Sparrow doesn't offer the rudimentary text formatting (i.e. bold, underline) that you'll find in Mail, but it makes up for it in its support for image attachments. Unlike Mail, which still forces users to attach images by sending them from the Photo Library, Sparrow lets you add images (yes, multiple image attachments are supported) to a message at any time. From within Sparrow, you can take a new photo or choose one from your Library, and the app gives you the option of resizing images. As far as sending and receiving messages, Sparrow for iOS still lags slightly behind running Gmail in a desktop web browser, but emails regularly appeared 5-10 seconds earlier on my phone than on the Sparrow desktop app. 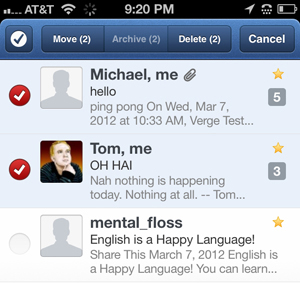 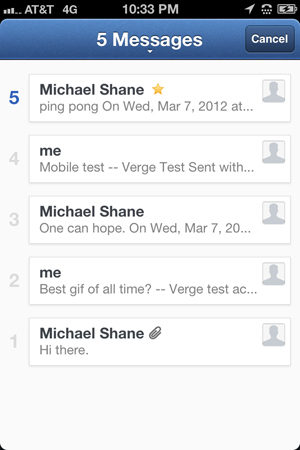 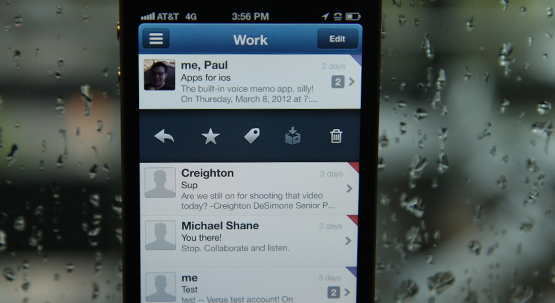 Like the desktop app, Sparrow for iOS supports multiple accounts, and you can add Gmail, Google Apps, Hotmail, iCloud, AOL, and many other IMAP services. There isn't any POP3 support, so Hotmail, Live, MSN, and any other POP accounts won't work in the app (though we hear POP is coming soon). Unlike OS X where you can choose your primary browser or email client, iOS forces you to use Mail when sharing from Mobile Safari, Flipboard, or any other app, which means it would be difficult to go 100% Sparrow.

Sparrow lets you connect to Facebook in order to pull in profile photos; the feature doesn't do anything else, but it adds a nice visual cue that comes in handy when browsing a large list of messages.

It's impossible to discuss modern email clients without talking about search. While Sparrow lets you download up to 1000 recent messages for quick search (you'll have to click through to search on Gmail's servers), search still pales in accuracy and speed to Gmail on the web. If you're an iOS user, you're simply going to have to fire up Gmail for your power searches.

Unfortunately, Sparrow is launching today without push email (i.e. an always-on account that gives you notifications whenever you receive a new message), which is a big flaw for what is otherwise the best mobile mail app we've used. Anyone that depends on push notifications for work, play, or on the go will have to still depend on Mail. You also can't set Sparrow to check your account at a regular interval, which means any time you want to see if you have any new messages, you're going to have to unlock your phone, open the app, and refresh the latest messages. Or, you could keep running Mail for push notifications, and then use Sparrow to manage your inbox — a situation that's hardly ideal. Apple's App Store policies call for third party apps like Sparrow to store your mail credentials on its servers for push notifications, and the Sparrow team says it's "a responsibility we're not ready to take." Leca has posted a petition page on the Sparrow site asking Apple to reconsider its rules, but we don't expect Apple to switch the push switch in the next week or two. 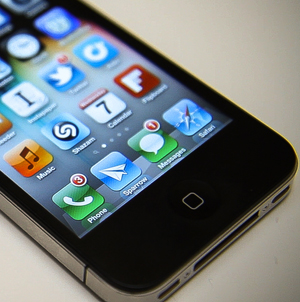 Like its desktop predecessor, Sparrow for iOS isn't a radical departure from email norms; it's an elegant approach to the process of sorting, saving, and responding to our overstuffed inboxes. It's the best mix of a Unified Inbox, labels, and multiple accounts available, and you won't find a more effective app for attacking and sorting a full inbox. In practice, it's not going to save you hours a day, but I was able to regularly run through 60 or 70 emails in just a few minutes (something that would take five or ten minutes longer in Mail). Sparrow may not be that much faster than Mail for adding a label or switching accounts, but all of Mail's extra tapping adds up. For pro users handling hundreds of messages a day, Sparrow makes email manageable on iOS, and new users will appreciate a mail client that uses proven ideas like pull-to-refresh that have long been available in many third party apps.

If you're looking for a tool that lets you power through your inbox, there's very little on any mobile platform as good as Sparrow. But, if you need an email client with push notifications, Sparrow's not quite there yet. Push notifications have been available in the beta versions of the app I've been testing, and it makes for one of the best mobile mail experiences on any platform. Until push is integrated into the app, though, it's going to be tough to depend on Sparrow as a full time client.