So, you've decided to purchase the new iPad. You've weighed all the important decisions: storage capacity, Wi-Fi only or LTE, which carrier to throw your lot in with, and — most importantly — white or black. Now you just need to plot your strategy for getting your hands on this highly-coveted new device. Fortunately for you, we've put together this helpful guide to where you can get your hands on Apple's latest tablet.

So, you've decided to purchase the new iPad. You've weighed all the important decisions: storage capacity, Wi-Fi only or LTE, which carrier to throw your lot in with, and — most importantly — white or black. Now you just need to plot your strategy for getting your hands on this highly-coveted new device. Fortunately for you, we've put together this helpful guide to where you can get your hands on Apple's latest tablet.

Buying direct from Apple: get ready for a line

The first, and probably most popular, option for purchasing the new iPad is at Apple's own website. Unfortunately, shipping times quickly slipped past launch day, and you'll wait two to three weeks for all models if you order now. The next obvious option is heading to an Apple store on launch day. Apple's stores have historically carried significantly more stock than any third-party options, but heading to an Apple store on launch day brings its own special challenges — you'll be fighting mobs of fans to get your hands on the new iPad. Apple has just announced that its stores will be open at 8AM this Friday in nine countries for customers looking to purchase the new iPad, but you'll want to be there a lot earlier to have a chance at buying Apple's latest.

LTE models from Verizon and AT&T: in-store and online availability this Friday

If your heart is set on an LTE iPad, Verizon and AT&T will be offering the iPad in-store and online this Friday. AT&T requires you to purchase a data plan along with your iPad (though you can cancel it after one month); Verizon sells iPads with or without data plans online. Even if you want data, we'd recommend you buy without so you avoid a $35 activation fee. As for buying offline, Verizon and AT&T let you purchase in-store without immediately purchasing data. If you're planning to go to the store, you'll likely again want to line up ahead of time, but note that there will be quite a few less iPads available at carrier stores compared to Apple's retail outlets — but probably a lot fewer people as well. 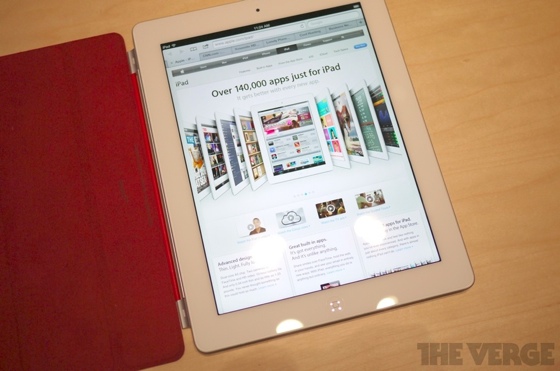 Third-party retailers: offline-only for the time being

There's also the option of going with a third-party retailer. Best Buy, Target, Sam's Club, and Walmart will all have the new iPad in-stores this Friday. Just like visiting a carrier store, less people will try visiting a third-party retailer, but there will also be a lot less stock available. In-store will be your only option at these retailers, at least initially — there's no word on when these retailers might start selling the new iPad online. RadioShack is also selling the new iPad in stores, but unlike the other retailers, RadioShack started taking pre-orders last week. This requires purchasing a $50 RadioShack gift card; fortunately, that card can be applied to your final iPad purchase — just think of it as a deposit.

Update: We just heard from Walmart that its 24-hour locations will be selling the new iPad as of 12:01AM Friday morning. If you're a night owl, this might be your best option for getting your hands on the new iPad. We've reached out to see exactly what models they'll be selling and if there are any other catches, and will update here with more info.

Online retailers: cut out of the loop, for now

If you're looking to buy online at this point, Apple, Verizon, and AT&T appear to be your only options: the above-mentioned third-party retailers as well as online-focused sales channels like Amazon, MacMall, Mac Connection, and NewEgg haven't released details on if or when they'll be selling the new iPad online. However, MacMall and Mac Connection will take orders over the phone -- MacMall says they'll be taking them as early as 12AM PDT this Friday. You'll have more options if you want to buy in a retail store, but you'll have to prepare to brave some lines — and possibly walk away empty-handed.

No matter what option you choose, the best choice for getting an iPad on launch day (preordering through Apple.com on the day of announcement) is no longer an option. If you're braving the crowds this Friday, we wish you the best of luck — let us know what your launch-day strategy is in the comments below!