Can HP step out of Apple's shadow with an ultrabook design all its own?

Can you believe that just six months ago, HP was thinking of ditching the PC business? It seems far fetched today, now that we know the company had laptops like the lightweight, long-lasting Folio 13 and the powerful yet relatively inexpensive Envy series up its sleeves. And of course, that's before we consider the HP Envy 14 Spectre, too. First revealed to us in an FCC filing and then again in a video tease, the Spectre turned out to be a 14-inch ultrabook practically bathed in Gorilla Glass, with a lovely high-res screen... but also a $1,399 price tag to go along with its fairly standard internal specifications. When it comes to ultrabooks, the user experience is paramount, but that's a lot to spend on a Core i5 chip with integrated graphics and 4GB of RAM. Is the Envy 14 Spectre worth $500 more than HP's own Folio 13? Is it worth $100 more than a 13-inch MacBook Air?

If you're looking for a head-turning design, it's definitely worth a look. Where the Folio 13 looked like a humdrum business machine and most other ultrabooks on the market feel like clones of the MacBook Air, the Spectre lives up to its name: It's like the slim, sexy shadow of an Envy 15, and without all the Apple references. From the raised, Gorilla Glass-covered aluminum palm rest that seems to float on air to the perfectly flat, glossy black monolith of a lid, all the main design points look gorgeous and feel original... a breath of fresh air. There are plenty of familiar elements too, like the Beats Audio volume dial, keyboard, power button and removable rear cover, but they're not stolen from competing machines. Each was introduced on an earlier Envy, and they all add up to a design that feels uniquely HP. Mind you, those glossy glass surfaces are also fingerprint magnets, so keep a microfiber cloth handy.

None of that's to say that the build is perfect, though. For one thing, the clamshell design is remarkably difficult to open. The tab on the lid was so shallow on my unit that I had to dig a fingernail between the two halves of the machine to get any grip. For another, the chassis isn't quite as solid as the best ultrabooks we've tested. The thin aluminum and magnesium alloy construction visibly flexes when twisted, and the keyboard tray has a slight (and fairly inconsequential) amount of give. The battery cover doesn't sit quite flush with the aluminum deck, leaving some visible seams, and the twin speaker grills rattle around in their housing and generally feel a little cheap. None of this will bug you unless you let it, and I could certainly deal, but a little additional attention to detail could have served HP well here. Chalk it up to a 14-inch screen, but the Spectre is a also good bit thicker and heavier than all the other ultrabooks we've tested:

In practice, though, the Spectre still fits places other laptops don't, and you get some important ports for your trouble. There's a MiniDisplay Port, full-size HDMI 1.4 and Gigabit Ethernet jacks, USB 3.0 and USB 2.0 sockets and a 3.5mm headset jack, plus a full-size SD card slot. That's right: your card won't stick out the side of the machine! They're all on the left side of the chassis, unfortunately (and the USB ports are right next to one another, too), but you should be able to use a single USB device, an SD card, an external monitor and a wired internet connection simultaneously with little trouble and no pesky adapters to lug around. 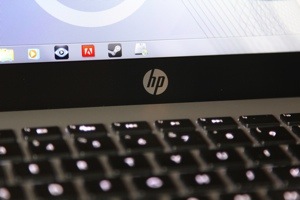 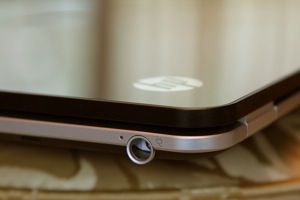 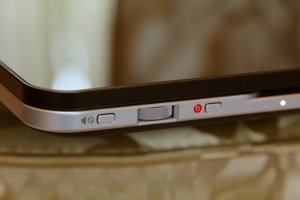 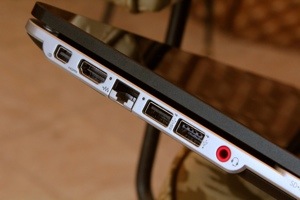 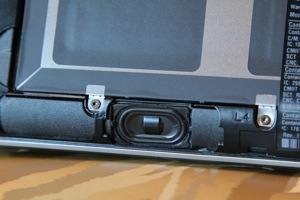 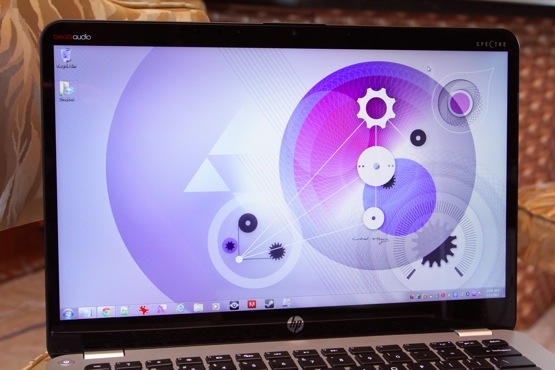 To say HP's laptop screens have been hit and miss would actually be a compliment, considering some of the terrible displays we've seen on many Windows PCs... but rest assured that the 14-inch, 1600 x 900 Radiance Display that comes standard in the Envy 14 Spectre definitely belongs to the former category. It's nowhere near perfect (it's glossy enough you'll want to use it in darker spaces) but it's wonderfully crisp, clear, gets nice and bright without washing out, and has fairly decent viewing angles to boot.

Colors do mute if you tilt it forward or back a lot, but typically from angles you'd never use, and you can comfortably share a movie with a second person without feeling like you're losing loads of detail. Oh, and unlike the unfortunate 1080p display on the Envy 15, this screen seems to accurately represent colors, too. Using an RGB color wheel image (and some informal tests) I verified that it can most definitely distinguish red from orange, and violet from blue. My only real complaint is that the LCD matrix here is a bit too easy to see. Even at arm's reach, I can tell that images are made up of vertical lines of pixels with my naked eyes, and the MacBook Air has no such issue.

By the way, don't assume that the Gorilla Glass cover makes the display okay to abuse: while it'll definitely protect from accidental dings and scratches (and if you're lucky, a drop or two) there's no air gap between the glass and the actual LCD panel. You can definitely see the liquid crystal matrix ripple if you press too hard.

Beats Audio is in full force on the Spectre, with a dedicated volume dial, equalizer button and mute button on lower-right-hand corner of the PC, not to mention a crimson light-up Beats logo that shines through the glass palmrest to easily identify the dial's position without fumbling around in the dark. While Beats definitely lends the audio a certain something, it can't compensate for the crummy speakers on this machine. They sounded hollow and harsh in Adele's "Set Fire To The Rain," and muddy in OneRepublic's "Say," among other tracks I tried. Movies fared a bit better, it's true, but you'll wand a good pair of headphones to really enjoy what Beats brings to the table here. 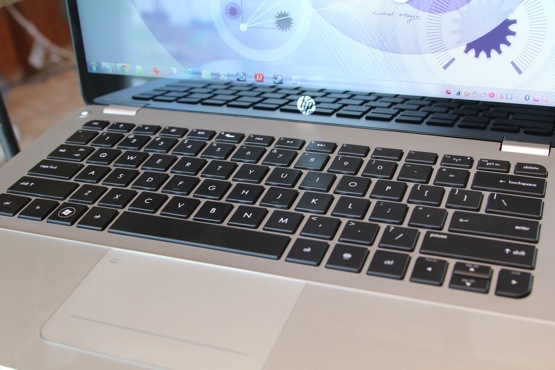 I've written nearly every word of this review on the Envy 14 Spectre's backlit keyboard, and it's not bad. The raised, glass-covered deck makes a nice shelf to rest your wrists on, just like a full-size machine, and the soft-touch coated chiclet keys have a fairly good amount of height and travel, and a reasonable amount of cushioning. I'd personally like a bit more of each, and some additional room to spread my slightly cramped fingers, too, but it's a perfectly good set of buttons. The one-touch media playback keys and brightness adjustments are also good to have around. The backlighting performs a neat trick, too: it automatically turns on if the computer detects that you're there, thanks to a proximity sensor mounted in the display. There's even an app that lets you adjust the sensitivity and timeout.

After dealing with dodgy drivers and sticky surfaces in my Dell XPS 13 and Razer Blade reviews, I was honestly expecting a similarly iffy trackpad here, but the Synaptics ClickPad in the Envy 14 Spectre is among the best I've ever used on a Windows machine. The actual button mechanism feels a bit too stiff — though not quite to the same degree as the Envy 15 — but when it comes to actual tracking, gesture recognition and palm rejection, it's truly excellent. I haven't managed to make the mouse cursor jump a line even once while typing this review, and yet the trackpad is still responsive as soon as I needed it to be. Both two-finger scrolling and pinch-to-zoom are quick, smooth and accurate (though pinch-to-zoom can be overzealous), and the glass surface itself is nice and slick, thanks to what HP told me is a chemical etch process which specially textures the material. Mind you, it's still not quite on par with Apple's MacBook touchpads, which are smoother still, but it feels fairly close. One important thing to note, though: in order to reduce false positives, HP turned off a lot of the advanced gestures by default. You can turn on two-finger rotation (for images) and four-finger flicks (for task switching) in the settings panel, as well as momentum for when you scroll. The question is whether those features are worth reduced performance. 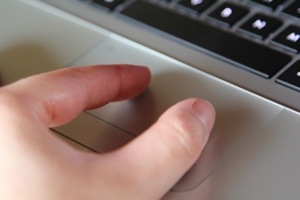 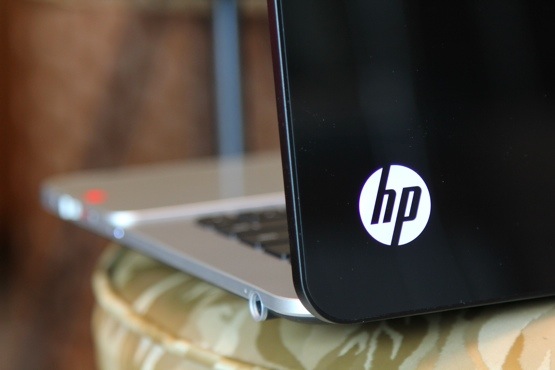 With a 1.6GHz Core i5-2467M processor, 4GB of DDR3 memory and 128GB of solid state storage (a Core i7 chip and a second 128GB SSD are available for $200 and $300 more), the HP 14 Spectre is pretty much your standard ultrabook as far as benchmarks are concerned. As usual, it'll cut through everyday tasks like a hot knife through butter and play 1080p movies just fine, but it won't play games unless they're fairly old or run at low resolution and low detail all the time.


Thankfully, the Spectre doesn't really have much in the way of bloatware to get in your way. You get pre-installed copies of Adobe Photoshop Elements 10 and Premiere Elements 10, CyberLink webcam and DVD burning software (an odd choice) and a full version of Norton Internet Security, not a short trial. You will have to suffer (or remove) the Bing Bar, though.

The one thing that does often differ from ultrabook to ultrabook is the quality and speed of the solid state drive, but the Spectre seems to run near the head of the pack. The Samsung MZMPA128HMFU SSD loaded apps quickly, and though it took 24 seconds to boot into Windows 7 and 30 seconds to fully load, I timed it waking from sleep in two seconds sharp. That's less time than it can take to get the lid open. 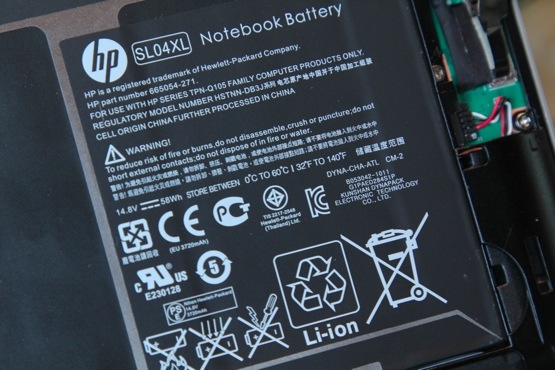 You might expect a chunkier laptop to house a longer-lived battery, but you'd expect wrong: though HP says the Spectre can provide up to 9.5 hours of battery life, we got just over half of that in our results. When we ran our Verge Battery Test, which cycles through a series of popular websites and high res images with screen brightness set to 65 percent until the battery drains, the laptop managed 5 hours and 14 minutes of runtime, and I managed about four hours of work (with dozens and dozens of browser tabs, Flash, push email, and background audio) in a pair of real-world scenarios. That's not bad, and only a little short of the Lenovo U300s and Asus Zenbook, but it's still a long ways behind HP's own Folio 13, and not nearly the kind of all-day battery life we'd like from these machines.

With just a tiny little fan pulling air out of the Spectre, it can definitely be loud under load, but you won't notice it most of the time: generally, the machine is cool and quiet, and when it does heat up, the glass palmrest insulates your wrists nicely.

Our review of HP Envy 14 Spectre 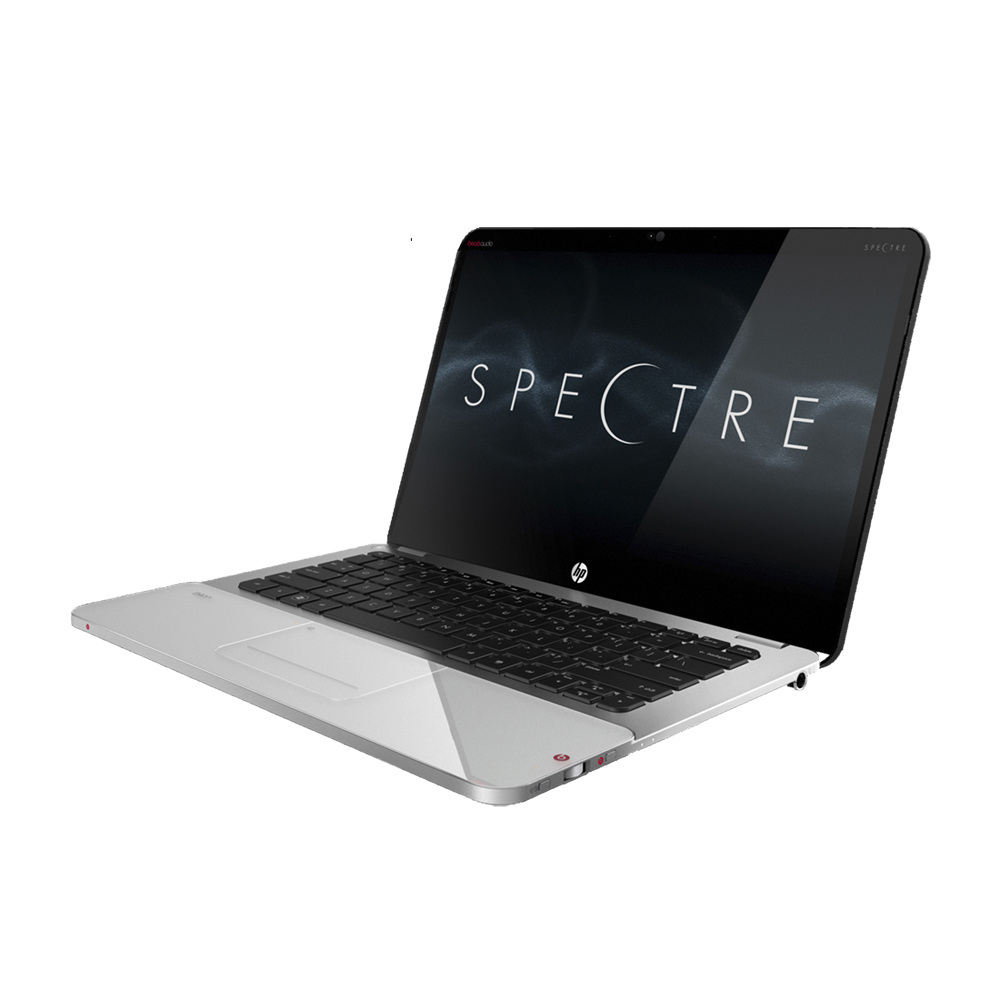 The Envy 14 Spectre is a perfectly fine, competent and desirable machine. It checks most of the right boxes up and down the line. Still, I have to admit, I wonder for whom it would be the right choice. While it's a striking machine, to be sure, I can't honestly say it beats the MacBook Air on any crucial point, and it costs $100 more. HP paints a lovely picture in bold strokes, but lacks Apple's attention to detail. If you prefer Windows, though, as I do, the Spectre is a great place to start, and it's got a better display, trackpad and port selection than most any ultrabook on the market. Just know that without the battery life and price to match, it’s not a flawless victory. In some ways, the Folio 13 is still the best all-around ultrabook on the market.