A slide has been leaked reportedly showing the specifications of Nvidia's upcoming GeForce GTX 680 graphics card.

Images and specifications of Nvidia's upcoming GeForce GTX 680 Kepler graphics card have cropped up early on a number of Chinese sites. The 680 will be Nvidia's first card built using a 28nm process and the company's answer to AMD's Radeon HD 7970. According to a leaked slide, the GPU will be clocked at 1,006MHz but will be able to temporarily increase its speed to 1,058MHz when necessary, which we assume will work in a similar way to Intel's Turbo Boost technology. The number of CUDA cores has been upped to 1,536 — a significant increase over previous generations — and 2GB of 256-bit GDDR5 RAM will be included.

Despite the across-the-board spec bump, the GTX 680 apparently has a TDP of just 195W — far more frugal than the GTX 580 it replaces, which uses 244W. The lower power consumption explains the switch to a dual 6-pin PEG connector setup for power. We'll have to wait to see how these numbers translate to performance, but we recently saw a mobile version of the Kepler GPU giving an ultrabook an extreme performance boost, so our hopes for the desktop card are high. Unfortunately there's no release date for the card yet, and pricing is also unknown. An educated guess would put the cost in line with AMD's flagship card at around the $550 mark, but we'll bring you the full details as and when they emerge. 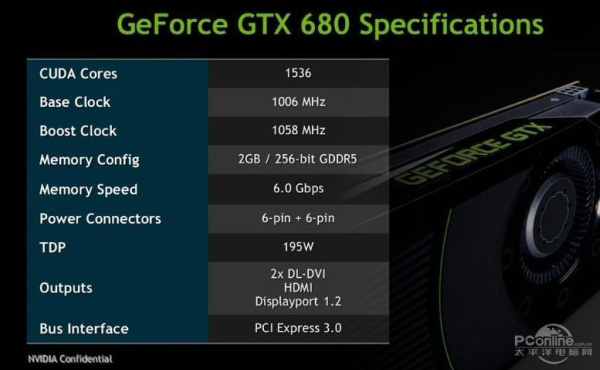