After the launch of the first Windows Phone (the HTC Titan or Triumph) in China, Microsoft is officially announcing its 7.5 Tango operating system in the country on March 21st.

Press in China have reportedly received invitations from Microsoft China to a launch event for Windows 7.5 Tango. The invitation announces that "the carefully designed, refined, and all-new Windows Phone 7.5 will be landing in China" and invites news outlets to see it on March 21st. There aren't any specific handsets listed in the announcement, but the HTC Titan ("Triumph" in China) with 7.5 recently went on sale, making it not only the first Tango device but also the first official Windows Phone in China. Chinese papers have also reported that Nokia is launching three Lumia devices on March 28th, likely with the new version of Windows Phone.

Nokia is Microsoft's best hope for making inroads to the Chinese smartphone market, which is heavily dominated by Android. As of last year, Nokia's Symbian had the second highest OS market share at 23 percent, and the company's phones are widely distributed. Meanwhile, we'll have to wait to see whether Chinese customers are willing to pay for the nearly $700 Titan / Triumph, as well as whether Microsoft has any surprises planned for its official launch. 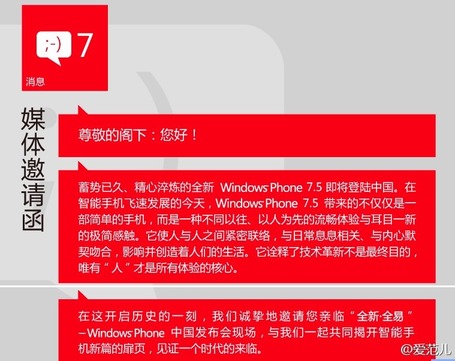