Engineering student Ames Bielenberg has connected a 19th-century Universal Stock Ticker to a computer with a repurposed USB adapter and a python script.

Share All sharing options for: A 19th-century stock ticker gets new life as a USB printer

In the late 1800s, the Universal Stock Ticker above was one of thousands used to print out real-time stock prices delivered over telegraph lines. Essentially the first automated printer, the simple machine converts electrical signals into rotations of a pair of wheels with raised letters on the outside. A small cylinder then presses paper against the wheels, stamping out a letter or number. And with some engineering know-how, student Ames Bielenberg managed to bring this ancient ticker back to life.

The stock ticker had been sitting in Bielenberg's house for years, so over spring break, he decided to see if it could be hooked up to a modern-day computer. To connect it, he took apart a USB-Serial adapter meant for connecting legacy devices to USB and connected its basic input wires to the machine, letting him send pulses that approximated the original telegraph signals. Then, he added a computer power supply to get it running and wrote a python script that converted computer text to directions for the ticker. The result, as you can see below, is a little muddy (the original ribbon was long gone, so he had to brush ink directly onto the letters) but pretty good for a pairing of technology from the 21st and 19th centuries. Besides its beautiful incongruity, this hack makes us wonder if there's any modern technology that someone could connect to the 22nd-century equivalent of a MacBook Pro. 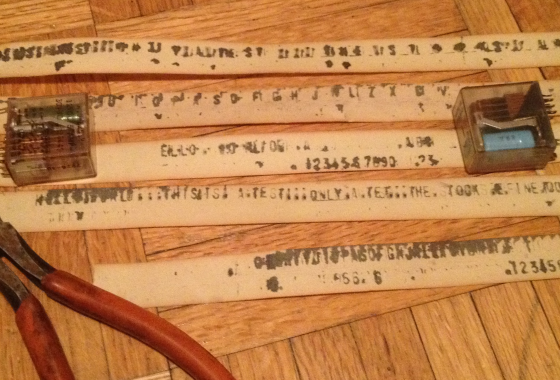