Images and specifications of a pre-production version of Samsung's upcoming NX20 camera have surfaced on Dutch site Focus Media.

Dutch site Focus Media has obtained a pre-production version of Samsung's upcoming mirrorless camera, the NX20. Looking like a slightly larger version of the current NX11, its odd shell holds a full 20.3-megapixel APS-C size CMOS sensor and a built-in flash. While this is only a pre-production model, it seems likely that the look and specifications will remain largely the same. On this model at least, Samsung has given the NX20 a considerable spec boost over the NX11: max ISO has been increased from 3200 to 12,800, max continuous frame rate has bumped from 3fps to 8fps, and minimum shutter speed moves from 1/4000 to 1/6000 of a second. The NX20 also has a 3-inch AMOLED screen, an electronic viewfinder, and built-in Wi-Fi. There're no pricing or release date yet, but we'll update you as and when Samsung makes the NX20 official. 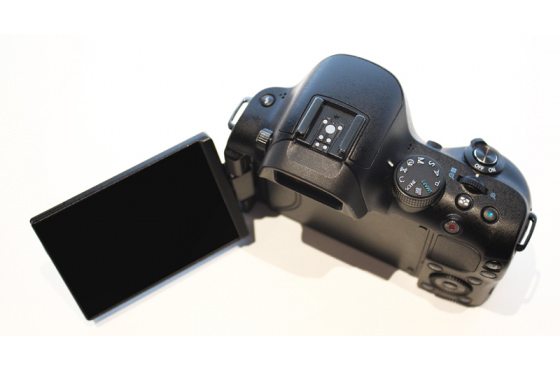