A previously unknown Sony tablet has appeared on the benchmarking app NenaMark's leaderboard, indicating that the company is working on a Tegra 3-powered device

Share All sharing options for: Sony working on a Tegra 3 Android 4.0 tablet?

A mysterious entry on the leaderboard of Android benchmarking app NenaMark seems to indicate that Sony is working on a Tegra 3-powered tablet. The new device is running Android 4.0.3 and shares the same 1280 x 800 screen resolution as the company's Tablet S (which is reported as 1280 x 752 due to the onscreen Android buttons). 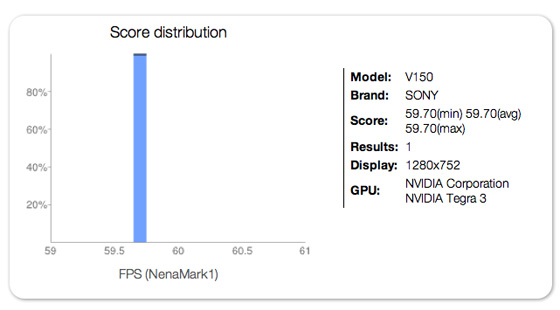 The test was run by a user named 'sony s1,' which curiously was the original name of Sony's Tablet S. Unfortunately, the benchmark was run on an outdated version of the app, but Tegra 3 tablets like the Asus Transformer Prime sit close to the top of the updated app's leaderboard, so performance shouldn't be too much of a concern. While we don't put too much faith in anonymous benchmarks, it does make sense that Sony would be preparing a new tablet, and given its current generation runs Tegra 2, Tegra 3 would be the obvious choice to power it.