Previously, I mentioned how bouncing your flash or using one of various flash diffusers can improve the look of your flash photography. Then I went over how to control the power output of your flash. However, there's only so far that an on-camera flash can take you. To really get creative, you need to be able to control not only the softness and power of the light, but also the direction. If you are comfortable using your speedlight on your camera and ready to move beyond the basics, it's time to take your flash off-camera.

Work with what you have. 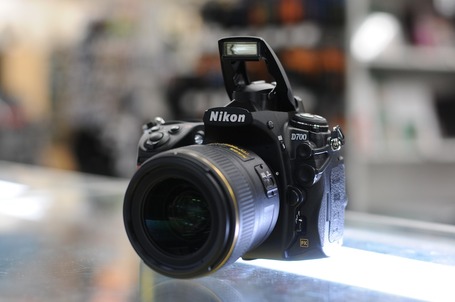 Many digital SLRs from Canon and Nikon today have the built-in ability to trigger a remote speedlight using the camera's pop-up flash. You may not even be aware of this; I wasn't aware of it until several months after purchasing my first DSLR years ago. The technology is relatively new for Canon, who includes the function on three current models: the 7D, the 60D, and the Rebel T3i. Nikon's current lineup of compatible models are the D800, D700, D300s, D7000, and D90; however, there are many older models that also feature the ability (D300, D200, D80, and even the beloved D70 if yours still works.) You'll notice that some prominent offerings from both companies are missing from this list, such as the Nikon D3/D4 or Canon 5D and 1D series. This is simply because those models do not have a pop-up flash. Don't fear; you can add wireless flash control to any of these cameras by using a commander unit, such as Canon's ST-E2 or Nikon's SU-800, or a second shoe-mounted speedlight that has a commander mode (Canon 580 EX or EX II; Nikon SB-910 or SB-700. The now discontinued SB-900 and SB-800 also feature commander modes.) Wireless flash control can also be brought to most lower-end SLRs in the same way.

To activate commander mode on your camera, you will need to a do a little menu digging. The menu will be different depending on the make and model of your camera. With Nikon, you'll be looking for the "Commander mode" setting for your built-in flash. Canon prefers using pictographs, which may seem confusing at first. You will also have the option to allow your pop-up flash to affect your image, or only trigger your remote flash. I recommend the latter, as pop-up flash is rarely a flattering look. If you are using a shoe-mount speedlight as your commander, you may wish to allow it to affect your exposure depending on the effect you're going for. I also recommend consulting your manual for a detailed explanation of how to set up your camera for wireless flash control. You will then have to set your speedlight into "Remote" (Nikon) or "Slave" (Canon) mode, which may also require some menu digging depending on which model flash you have (the latest Nikon flashes have a simple position on the power switch for both "Remote" and "Commander." Remember, when it doubt, consult your manual.) 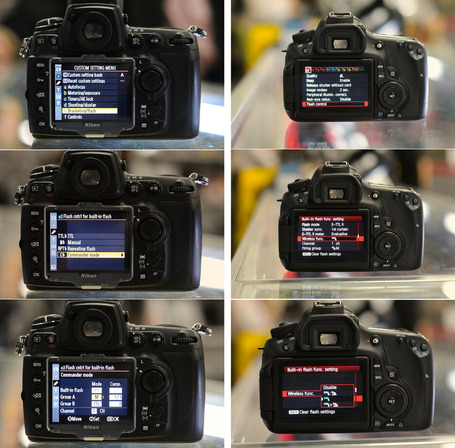 If you're familiar at all with studio lighting, you've probably seen moonlights and strobes with an optical slave ability. An optical slave allows a remote studio light to fire in sync with a master light connected to the camera. It's important to understand that, while some speedlights do have an optical slave setting, the wireless flash control I'm talking about here is much more advanced. Your remote speedlight is not simply reacting to the light emitted from the camera's pop-up flash, but is actually receiving a very detailed set of instructions in a split-second. When you press the shutter button on your camera, your pop-up flash (or external commander unit) sends a brief infrared pulse of information that communicates metering, flash exposure mode, and power information to your speedlight before the shutter opens. Then, when your shutter does open, your flash is ready with all the information it needs to create the proper exposure. Whether you want your flash to to fire in TTL mode or full manual, you will set this not on the flash itself, but within the flash control menu of your camera or external commander unit. If you have multiple remote flashes, you can also set up different "groups" so that not every remote flash has to fire at the same settings. You can set Group A to Manual at 1/4 power, and Group B to Manual at 1/8 power, for example. You can even set one group to TTL and have another on Manual. Furthermore, you will still be able to use high-speed sync just as if your flash was on camera. Using this system, everything is controlled at the camera, which means you can make adjustments on the fly without having to walk over to your remote flashes to change settings. This has helped me on many occasions to not look like an idiot in front of an impatient subject.

If you were, like me, surprised to find that such an advanced wireless light control system existed in your camera, then you may be thinking "Holy cow, this is great!" While I certainly don't want to stifle your enthusiasm, I feel I need to draw attention to the imperfections of the aforementioned system. Whether you're using the pop-up flash, a shoe-mounted speedlight, or a ST-E2 or SU-800 as your commander unit, the way your camera communicates with your remote flash is the same: via an infrared signal. This means that, like a TV remote, your camera has to have a clear line-of-site path to your remote flash. Other infrared sources, such as the sun, can cause interference that prevents the system from working reliably. Your range will also be limited. Again, don't fear: there are several options available to improve the reliability of your wireless flash system regardless of whether you're outdoors, in a different room from your flash, or underwater. (Okay, maybe not that last bit—at least not without some serious watertight cases for your gear). 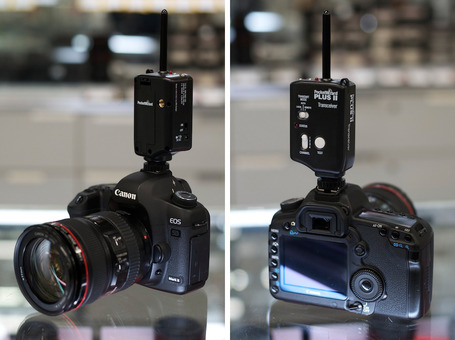 A radio trigger acts as a link between your camera and a remote flash. Using radio waves, instead of infrared light, allows the signal to pass through walls, go around corners, and maintain reliability in direct sunlight. There are two basic styles of radio trigger when it comes to using speedlights, which I refer to as "dumb" and "smart." A dumb trigger will require you to set your remote flash in manual mode (not remote/slave mode) and will only communicate the basic "pop" signal from your camera. All power adjustments will have to be made on the remote flash itself, and you will not be able to take advantage of TTL metering or high-speed sync. Dumb triggers have the advantage of being lower priced, an advantage that is magnified when you have multiple remote speedlights as you will have to buy a separate receiver for each flash. The Phottix Strato trigger set costs about $80 for both a transmitter and a receiver, and extra receivers can be purchased individually. While the Strato is a "dumb" trigger, it does offer the unique feature of TTL passthrough if you also want to use an on-camera speedlight on top of the transmitter. The PocketWizard Plus II (soon to be replaced by the Plus III) is more expensive, at about $170 per unit. Each unit is a transceiver, meaning it both transmits and receives. The PocketWizard Plus series is the de facto standard for studio lighting, but can be adapted to control speedlights with a simple cable. They are reliable, offer multiple channels, and hold up well. The RadioPopper JRx series, like the Plus II's, are designed with studio photographers in mind but can be adapted to trigger speedlights. The units, which cost about $170 for a transmitter/receiver set, are compact and reliable. Furthermore, you can purchase an additional accessory that will give you limited flash power control straight from the transmitter on your camera. It's not enough for me to consider it a smart trigger, but it is a solid choice for photographers on a budget who need more control. 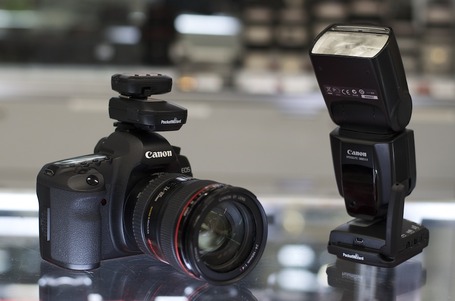 Compared to dumb triggers, smart triggers will facilitate greater communication between your camera and remote flash, giving you the additional functionality of TTL metering, high-speed sync, and flash power control straight from the camera. PocketWizard offers a formidable smart trigger solution: the TT series. At about $200 for a transmitter (the TT1) and $230 for a transceiver (the TT5) they are certainly not cheap. The transmitter sits directly on your camera's hot shoe and translates the electronic TTL signal into a radio signal that it sends to the transceiver. Your remote flash shoe-mounts onto the transceiver, which sends it the appropriate electronic signal. Your flash doesn't know it's not on the camera. It took a good deal of reverse-engineering and testing for PocketWizard to make this work, and it works well. With the addition of the AC3 zone controller that mounts atop the transmitter, you can set up to three groups of flashes and control their power separately straight from the controller. You won't have quite the full level of control you get from Canon's or Nikon's native systems, but you will have much greater reliability. My personal favorite smart trigger, however, is the RadioPopper PX system. While not as intuitive to use as the PocketWizards, and a little pricier at $250 per unit, the RadioPoppers offer greater control. Rather than plugging into your camera's hot shoe, the PX transmitter adheres to your standard commander unit via either Velcro or gaffer tape technology (whether your commander be a pop-up flash, shoe-mounted speedlight, or dedicated commander unit). Unlike the PocketWizard, the RadioPoppers completely ignore the electronic signal produced by your camera's hot shoe. Instead, the transmitter picks up the infrared pulse from your commander unit, translates it into a radio signal, and sends it to the receiver. The receiver, mounted to your speedlight, retranslates the radio signal back to an infrared pulse that it shines directly on your speedlight's IR sensor. Whereas a flash on a PocketWizard TT receiver doesn't know it's not on the camera, a flash on the RadioPopper PX receiver does't know it's not using the native manufacturer's wireless system. This means that all the control you have with the native system is there, and you access it in the same way you always would: through the menu on your camera or commander unit. You don't need an additional zone controller. If, however, you are using a camera without a pop-up flash with wireless control functionality, you will need to buy some type of commander unit for the PX system to work at all. 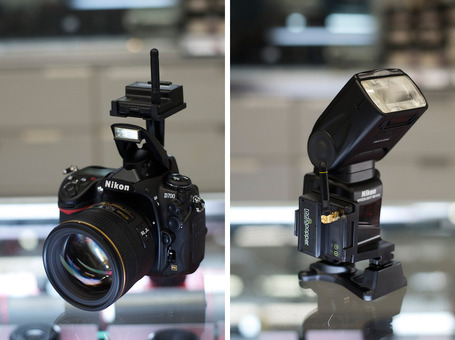 It's a little mind boggling when you think about all the electronic sorcery going on inside a smart trigger in order to keep everything in sync, but they work at the speed of light. And apparently, the speed of light is still fast enough to keep up with anything your camera can throw at it: even when shooting at 1/8000 of a second with 1500 feet of space separating your camera from your flash (the maximum working distance for the PX system according to RadioPopper.) While the price for entry into the smart trigger system is high, the control and reliability you get from it can be hard to live without for serious shooters. If you're a more casual photographer, I highly recommend using your camera's native wireless flash control system until it fails you. It may never. If it does, look into a radio trigger. Whatever system you ultimately decide on, getting your flash away from your camera can significantly improve the quality of your photos. Pick up a light stand and try out some new modifiers, like an umbrella or a soft box, and have fun. If nothing else, experimenting with off-camera flash is a great excuse to buy new gear.

And thus concludes my guide on how to be a better flasher. Thanks for reading!