When Canon introduced the EOS 5D Mark II in late 2008, it was something of a cinematic revolution — its HD-capable, full-frame sensor granted access to the world of cinematic depth of field at a fraction of the usual price. However, a lot's changed in the three and a half long years since the camera broke cover, plus now Nikon’s making a major play for DSLR video shooters with the bold new D800. Canon’s response? The new EOS 5D Mark III. It’s a full frame DSLR with a 22.3-megapixel sensor, a fast new processor, much-requested video fixes and additions, and a number of features ripped from the camera’s high-end brother, the EOS-1D X.

All these new features come at a cost, though — the camera will launch at the end of March for $3,499 for the body only, or $4,299 with Canon’s EF 24-105mm F/4 L lens. That's significantly more than the Mark II, which will stay on sale and get an additional price cut next week. We got to spend some time with Canon's latest and check out its new features — read on to find our first impressions of the 5D Mark III.

Editor markup for Canon EOS 5D Mark III hands-on photos. This is only visible in the story editor.

Physically, this camera feels quite similar to the 5D Mark II, but Canon has added some refinements from the EOS 7D — the power switch has been moved up to the control dial on the top, there’s a dedicated video capture / Live View button, and a new multi-function button (for controlling features like the AE lock or one-touch RAW / JPEG settings) sits up near the shutter button. There’s also a new 3.2-inch display on the back, which is identical to that of the 1D X and contains 1,040,000 dots. The viewfinder has also been been upgraded — it now offers 100 percent coverage with a .71x magnification factor, up from the already-respectable 98 percent coverage found in the Mark II.

While these changes are notable, the actual act of handling and shooting with the camera will be very familiar to anyone who has used one of Canon’s recent higher-end DSLRs. It’s a solid and well-balanced device with easy access to every button or dial you’d like to access, and the new movie mode / Live View button is a massive improvement over the 5D Mark II’s somewhat difficult system. The Mark III is about as refined as you can get for an EOS camera without buying a 1D, and users of older of lower-end Canon DSLRs (like the 60D or Rebel T3i) will feel right at home if they gave this camera a shot.

The viewfinder in particular is a noticeable improvement over the Mark II and a necessary feature considering Nikon added 100 percent coverage to the D800. Considering the much less expensive 7D also features a 100 percent coverage viewfinder, it would have been a big omission for the Mark III not to get this upgrade. The sharp 3.2-inch LCD is another welcome change, particularly for those who shoot a lot of video or use Live View frequently when shooting still photos. The menu system has also been slightly streamlined, but will still be familiar to anyone who has used a Canon camera before. While the 5D Mark III might not look and feel terribly different at first blush, these changes make for a much improved shooting experience when compared with the Mark II. 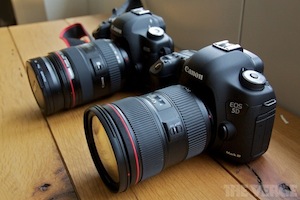 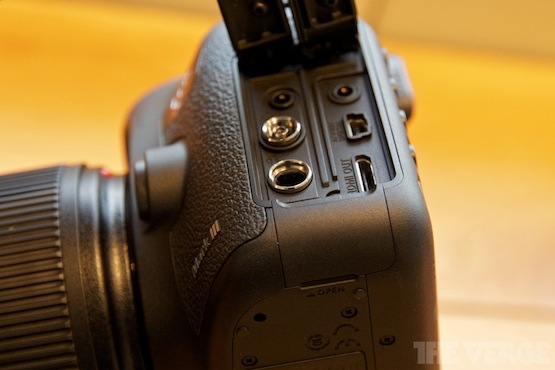 The camera shares a lot of physical DNA with its older sibling, but it’s a whole different ballgame internally. The most important new components on board are the 22.3-megapixel, full-frame CMOS sensor and the DIGIC 5+ processor — these two pieces work together to provide a host of improvements in terms of photo and video quality, as well as in overall performance. While the sensor represents a only minor upgrade in raw pixel count, there are three changes that drive improved images and video: a gapless microlens design, an improved photodiode structure, and on-chip noise-reduction.

The first two changes relate to the individual photodiodes on the sensor — the new gapless microlens covers the diodes and lets in more light than the previous design, resulting in an improved signal to noise ration, The diodes themselves are now more efficient, resulting in an improved dynamic range. Lastly, Canon has built a proprietary on-chip noise reduction system that scrubs noise before the image is output from the sensor. As for the DIGIC 5+, Canon borrowed that from the 1D X as well (though the higher-end camera has two of them). It’s an upgrade over the DIGIC 5 that you’ll find in Canon’s newest point-and-shoot cameras, and a major contributor to the 5D Mark III’s improved speed — the company says the new chip is 17 times faster than the DIGIC 4 in the Mark II. 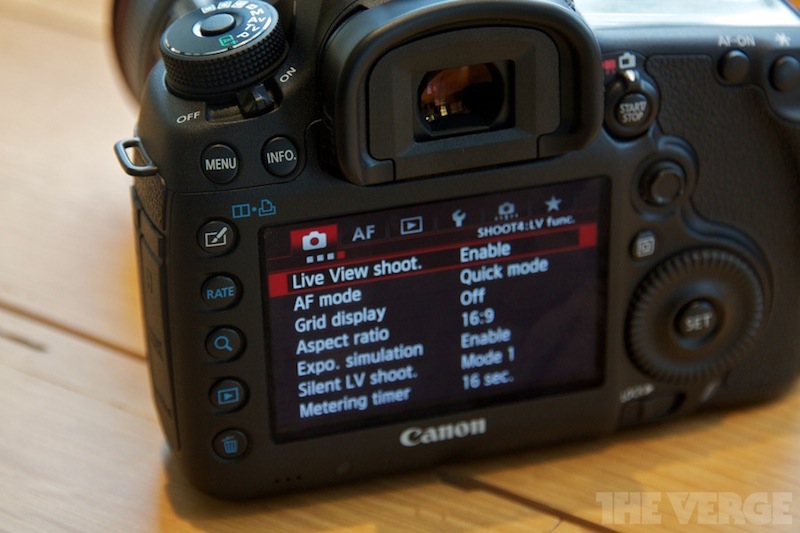 All the new technology under the hood has allowed Canon to answer the wishes of video shooters everywhere: the 5D Mark III doesn’t skip lines when downscaling the massive 22.3-megapixel output to HD resolution when recording video, which Canon claims will significantly decrease the dreaded moire effect that plagued the Mark II. Aliasing and CMOS skew, two other common visual knocks on the Mark II, have been improved as well. Canon showed us a moire test comparison between the Mark II and Mark III and it did show an impressive improvement — we’ll have to see how the camera performs out in the real world, but there’s hope that Canon’s moire issues may be a thing of the past.

Another video annoyance, the 4GB video file size limitation, has been done away with: now, when you reach the end of a 4GB file, the camera just automatically starts a new file. Canon has also finally added the much-requested headphone jack (making the Mark III the first EOS camera with this feature) and the ability to monitor and adjust audio levels while recording with the command dial on the back. That command dial also functions as a touch-sensitive scroll wheel for silent operation when shooting in video mode, but it otherwise retains the same "clicky" feeling when physically turning it. There’s also more flexibility in terms of shooting modes: 1080p footage can be shot at 24, 25, or 30 FPS and there’s a new 720p mode that offers 50 or 60 FPS.

Video ISO range is now 100 to 12,800 with 25,600 available as an extended option, and the new sensor and DIGIC 5+ combo promises a two-stop improvement in noise reduction. And in another theft straight from the 1D X, the IPB and ALL-i video codecs are included, which gives shooters more flexibility when choosing between smaller file sizes or higher quality, more editable footage. Unfortunately, there’s still no option for clean HDMI output (which allows the uncompressed video footage to be captured on an external recorder) — when we asked about this, Canon’s reps said "not yet." However, it does sound like the HDMI signal output won’t downsample from 1080p to 480p when recording, thanks to the DIGIC 5+. Canon’s reps couldn’t say that with certainty, but they suspected it wouldn’t be an issue going forward. 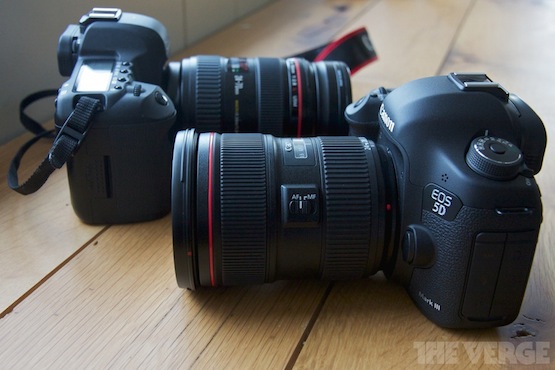 Lest we forget, Canon’s new processor and chip combo yields major benefits for still photographers as well. A major knock on the 5D Mark II was its nine-point autofocus system, which felt outdated even when the camera was introduced in 2008. With the Nikon D800 offering a 51-point system, Canon had to respond — and it did so by essentially cramming the 1D X’s autofocus system into a camera selling for half the price. The 5D Mark III offers 61 autofocus points, plus up to 41 cross-type sensors (depending on your lens). Exposure metering has also been revamped: the Mark III sports a new dual-layer, 63 zone system, compared to the single-layer 35 zone system found in the Mark II. The DIGIC 5+ also powers a nice improvement in shooting speed, as the Mark III can now shoot at 6 fps in RAW mode, up from 3.9 fps for the Mark II. The improved shooting speed is dramatic and immediately noticeable when using the camera — it won’t compare with the 1D X’s machine gun-like performance, but it equals that of the D800.

Canon’s also added some "silent shooting" options, which dramatically reduce the volume of the shutter when taking images. Even in silent mode, the camera shoots RAW at 3 fps and sounds about half as loud as it does in standard mode. Shutter lag has even been reduced, from 75 milliseconds for the Mark II down to 59 milliseconds on the Mark III — and this only trails the powerful 1D X by a tiny 4 milliseconds.

The 5D Mark III’s still photo ISO range now stretches from 50 to 25,600, with the option of pushing to 51,200 or 102,400 ISO included. While samples we saw at those settings exhibited a great deal of noise, they still could be potentially usable under certain circumstances (you just won’t want to make a 20 x 30-inch print). Outside of that extended range, however, the 5D Mark III should produce much less noise compared to the Mark II. Canon showed a pair of identical photos, one from the Mark II at 6,400 ISO and one from the Mark III at 25,600 ISO, and noise levels were nearly identical. We also saw images from each camera shot at the same ISO, and the Mark III’s improved noise performance was immediately obvious.

In another 1D X-inspired feature, Canon has added multiple card slots to the 5D Mark III. Unlike the 1D X (which holds two CompactFlash cards), the Mark III has a slot for one CompactFlash and one SD, and offers a variety of options for storing your work: you can have RAW and JPEG go to different cards, you can have whatever you shoot get stored to both cards as backup, or you can just increase your overall storage capacity without necessarily making duplicates. 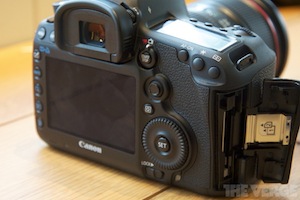 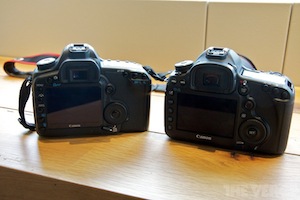 Editor markup for Canon EOS 5D Mark III press photos. This is only visible in the story editor.

Canon’s 5D Mark III retains Canon’s position as a (relatively) low-cost way to shoot full-frame photos or high-quality HD video, though it’s now significantly more expensive than the 5D Mark II it supplants. However, no one would have mistaken the Mark II as competitive with Canon’s 1D Mark III and 1Ds Mark III that were available when it launched. The 5D Mark III, on the other hand, feels like Canon pulled as many features as it possibly could from the new 1D X (including its autofocus system, video codecs, and processor) and fit them into a camera that is significantly less expensive. Compromises were made, particularly in the ISO range, shooting speed, and weatherproofing, but the new autofocus system and 6FPS shooting mode means that this camera’s target audience just expanded significantly. It’s no longer a camera best suited to studio work.

In fact, it wouldn’t surprise us at all to learn that the 1D X and 5D Mark III were designed in tandem. The 1D X will essentially replace two cameras when it’s released in late April, and had to be designed such that users of both the 1D Mark IV and 1Ds Mark III would find it a suitable replacement camera. And while the hierarchy Canon showed us has the 1D X at the top of the pyramid, the 5D Mark III doesn’t feel subordinate to Canon’s top of the line DSLR. It feels complementary, and we suspect that many professional users will consider both cameras — and that many could be completely happy with the 5D Mark III.

While it’s far too early to pass judgement on this camera, Canon has clearly been listening to user requests over the last three years, and they’ve hit on just about everything. However, with Nikon’s D800 looming, Canon didn’t have a choice in the matter — had the company come with anything less, it could have been in serious trouble. As it is, Canon and Nikon will likely spend the next year fighting it out for DSLR supremacy, and the increased competition means fans of both brands will likely be happy.

Jordan Oplinger contributed to this report.