Japanese musician Masaki Batoh's unconventional new album Brain Pulse Music features the artist getting busy on an instrument of the most unorthodox kind — a freakish, EEG-enabled headset that turns brain waves into sound waves. The sci-fi-inspired headgear (called a "BPM machine") reads the waves from your parietal and frontal lobes, and sends them as radio waves to a connected motherboard. That motherboard then has controls for frequency, sensitivity, threshold, and volume; a lot like an analog synthesizer, just creepier. It's not something you can just pick up and jam on, though — in order to get the best sound out of the machine, Batoh says it's important to get into a meditative mental state and not speak. That means you'll need to get someone to take care of vocals if your BPM band wants to hit the road. 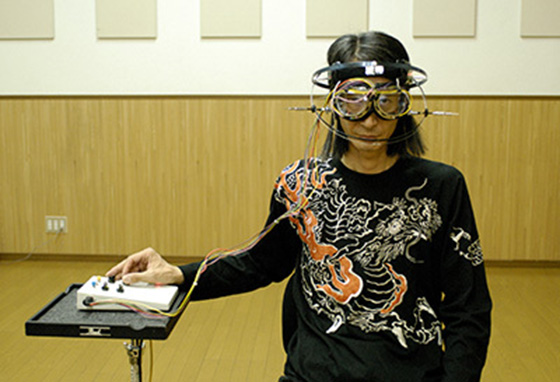 Batoh is producing his BPM machines commercially with a company called MKC, and they're going for $699.99 on the website of his label, Drag City. That's a nice chunk of change, even for a brain instrument, but you won't feel as guilty knowing that the proceeds (as well as the proceeds from Brain Pulse Music) are going to support tsunami victims in northern Japan.