James George and Alexander Porter have collaborated on a series of CCTV-inspired candid photographs, using custom software to combine the Kinect sensor's depth information with images from a Canon 5D.

In our Lytro review, we mentioned seeing a preview of an upcoming mode that allows you to manipulate the perspective of a photo after the fact, using 3D data captured by the camera's unique sensor. While the Lytro won't be widely available for a while, you may already have technology with the potential for similar functionality under your TV stand in the shape of Microsoft's Kinect. James George and Alexander Porter have exploited this in a series of CCTV-inspired images, using custom software to combine the Kinect sensor's depth information with images from a Canon 5D. The results are striking — George and Porter took candid photographs of passengers on the New York City subway, once intended to have a high-tech surveillance system of its own, and the images impart the eerie idea that we never quite fully know who (or what) is watching us. 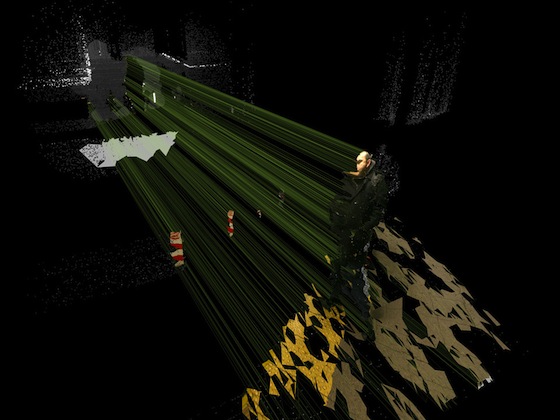