A new Apple TV seems to be on the horizon

It looks like there may be a little more fact behind some of the Apple TV fiction we've been hearing over the past few days. According to sources (as well as Apple Store stock counters), the current Apple TV is becoming increasingly sparse at stores around the country, with most locations reporting no availability at all right now. More tellingly, at all of the stores where the device is out of stock, availability is listed as starting on or after March 7th — the day of Apple's big iPad event — which seems to suggest that something new is indeed coming. The device can be ordered online, and there are a few locations which show the current model in-stock, but that seems to be the exception, not the rule. 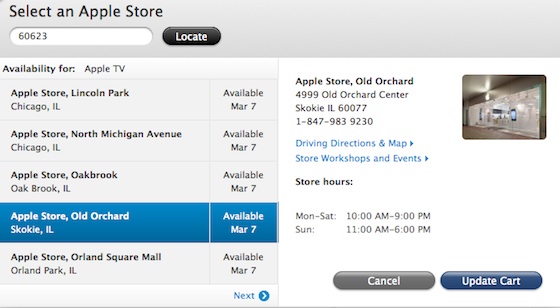 This follows on the heels of reports of new Apple TV SKUs appearing in Best Buy databases, as well as news this week that Apple has been forging ahead with plans to partner on new TV services. According to the New York Post, Apple's VP of Internet Software and Services Eddy Cue is in deep talks with content-creators and distributors trying to hammer out a deal that will please all sides. Those deals are rumored to be announced around the 2012 holiday season.

The idea that a new Apple TV will be available on day of Apple's San Francisco event lines up with what 9to5 Mac was recently reporting, and gels nicely with rumors we've heard that the iPad 3 (or iPad HD, depending on who you talk to) will also be made available not long after its introduction. Historically Apple has shortened the length of time to availability as a product line matures, and there's no reason to think that won't be the case here.

If you're feeling lost, you can catch up on all of our iPad 3 rumors right here, and all of our Apple TV chatter here.

More from this stream Apple TV with 1080p video: the full story