OnLive and Rockstar Games have updated L.A. Noire for OnLive with touchscreen controls.

Back in December, when OnLive first showed us its Universal Controller, the company was adamant that you wouldn't actually need it to play high-profile, top-notch games. That day, OnLive CEO Steve Perlman showed us L.A. Noire not only streaming to an iPad, but also used the tablet touchscreen as an intuitive native set of controls, manipulating evidence between his fingers without a clumsy intermediary such as a virtual analog stick nub. Tonight, OnLive says those touchscreen controls are ready to roll out, and whether you've already got a copy of L.A. Noire on OnLive or pick one up right now, you should be able to try them out immediately if you've got a capable Android tablet or phone. We'll let you know what the new control scheme's like when we give it a go ourselves.

Update: We tried out the first ten minutes of the game, and so far it's a lot like the Android and iOS version of Grand Theft Auto III, with all the same little touchscreen buttons for entering and exiting vehicles, turning on your siren, sprinting and so on, a virtual analog stick when you start walking, and swiping just about anywhere else to move the third-person camera. There are also additions, though, like a button for your journal, and you can indeed use your fingers to manipulate evidence, though it's not quite as intuitive as we'd hoped. Also, there doesn't seem to be any way to change the position or size of those touchscreen buttons, a feature we really loved in the touchscreen Grand Theft Auto III. You may have to get used to the setup you see below. 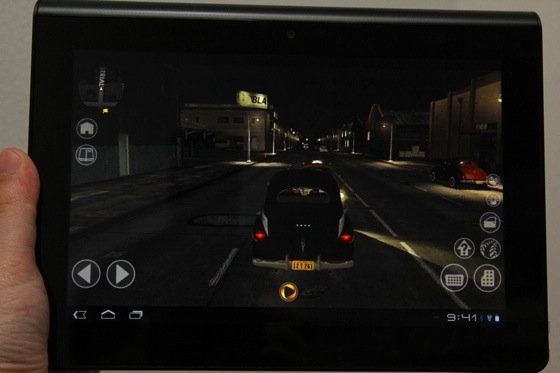