A contest on Samsung's Facebook page features a picture of a Galaxy Note – only it appears to be running a near-stock version of Android 4.0.

Samsung Mobile is currently conducting a contest on its Facebook page, where you match up five friends for the chance to win a Galaxy Note. The contest doesn't do much for us, but the phone on the contest's landing page caught our eye: it's a Galaxy Note, but rather than running Gingerbread with Samsung's TouchWiz skin, it appears to show a near-stock version of Android 4.0. Odds are, the device and its five-column version of Ice Cream Sandwich are just a mockup made for the contest, though it's a little odd that Samsung wouldn't just show the handset as it is. The mockup could also be a peek at Samsung's upgrade plans for the device, though that seems far more unlikely — we've seen what Samsung's doing with Android 4.0, and TouchWiz is as overbearing as ever. The pictured phone certainly looks the way we hoped the Galaxy Note would, and given that Samsung has promised an upgrade to the device, we should find out soon whether Samsung duped us or was just tipping us off. 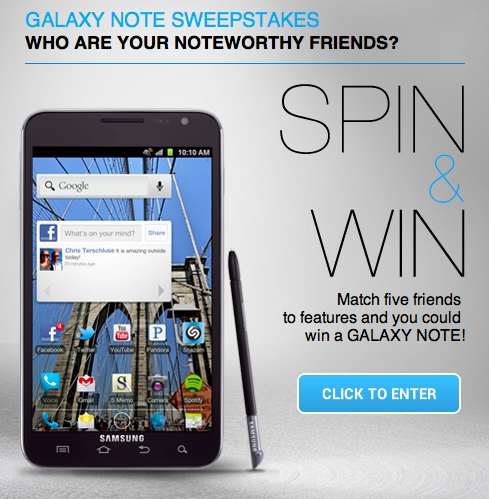