A new render of the Samsung Galaxy S III has appeared on Dutch website GSM Helpdesk, giving further legitimacy to the leak from a few days ago. The new image looks remarkably similar to the previous one, although there's no sign of the dedicated camera button, or a power button for that matter. The TouchWiz UI that Samsung layers on top of Android differs dramatically between the two pictures, with the new render showing what appears to be a Gingerbread status bar, and only four icons across, indicating that this may be an older image than the last. The Galaxy S III presented in both images seems to take take design cues from Samsung's Apple-patent-dodging Galaxy Tab N range and the new Galaxy S WiFi 4.2.

Once again, we're pointed to a Samsung event taking place on May 22nd (the next Tuesday the 22nd is in May), which would be in line with reports from Korea about Samsung's April / May timeframe. It now seems like both leaks may be legitimate mockups, but we'll have to wait until Samsung makes an official announcement to know for sure.

Update: As pointed out in the comments below, the new on-screen graphics are taken from a PR image for last year's Galaxy S II unpacked event. While there is a possibility that the agency responsible for the image is simply reusing material, it does cast further doubt on the validity of this render. 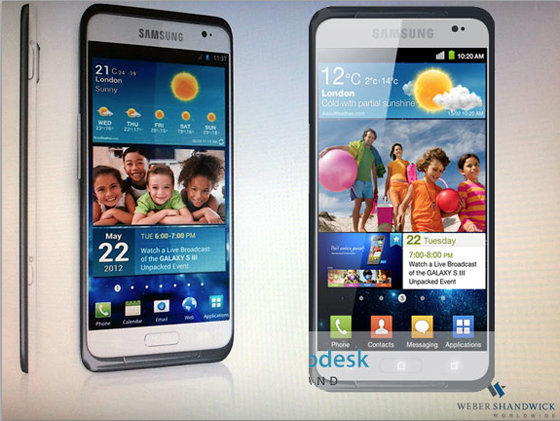