A 2.03-megajoule laser blast has been achieved at the National Ignition Facility at Lawrence Livermore National Laboratory. The achievement makes the NIF's ultraviolet laser the most powerful of its kind.

The laser at the National Ignition Facility (NIF) at the Lawrence Livermore National Laboratory in Livermore, California has produced a blast of energy measuring 2.03 megajoules at its most energetic point — surpassing its 1.8-megajoule design specification and doubling the energy of the 1-megajoule discharge it achieved just three years ago. This makes the NIF's ultraviolet laser the most powerful in the world, and brings the organization one step closer to its goal of "fusion burning" solid fuel; creating the same kind of fusion reaction produced by stars, and hopefully paving the way for a new kind of green power plant.

The NIF's goal with these experiments is called inertial confinement fusion (ICF) — a type of fusion reaction created by heating and compressing a small piece of solid fuel, in this case a frozen pellet of a hydrogen isotope (a different kind of experiment than those the SLAC lasers are being used for). If done successfully, the fuel will "ignite," causing a fusion chain reaction that produces more energy than is added by the laser. It sounds easy enough, and was once thought to be well within reach, but the road toward ignition has contained some unexpected obstacles. The scientists' technique (called "indirect drive") uses lasers to heat and compress the contents of a gold cylinder (called a hohlraum, below) by blasting the hohlraum into producing x-rays, but the interactions between the x-rays and the plasma inside the hohlraum have been unexpectedly turbulent, reducing the energy in the system, and making it more difficult to get the reaction to start. The scientists are racing to achieve ignition by 2013, the end of the two-year National Ignition Campaign, although they are confident they can meet the goal. 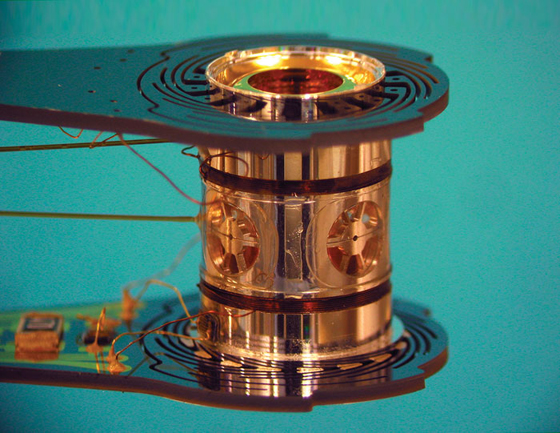 While the recent 2-megajoule blast is encouraging, an interim report from the US National Academies panel released in early March is more restrained, pointing to "critical scientific and engineering challenges associated with establishing the technical basis for an inertial fusion energy demonstration plant." Nevertheless, while a working ICF-based plant might be a long way off, the idea of creating a miniature star in a laboratory is fascinating.