Twitter just released a major update to TweetDeck, and while version 1.3 doesn't fix all the complaints that longtime users had with December's revamp, there's a lot of improvements worth noting.

Twitter just released a major TweetDeck update, and while version 1.3 doesn't fix all the complaints that longtime users had with December's revamp, there are a lot of improvements worth noting. On the surface, the app looks and runs just the same as the last version of TweetDeck — there aren't any major design changes or performance issues of note. One thing that we didn't find fault with when the app was redesigned in December was performance, and fortunately this update keeps things running smoothly. Unfortunately, columns are still not resizable; when running fullscreen on our 13-inch MacBook Pro, there just not enough space for four columns, leaving a huge amount of wasted space on the right side of the screen. An option to expand or shrink columns would be a huge improvement, but we're not holding our breath.

The 'activity' tab is a firehose of your follower's actions

Once you start clicking around, though, you'll start to notice some changes. Upon clicking "add a column," you're presented with several new options: "interactions" and "activity" join the already-existing options. Just like on Twitter's web client, interactions displays not only those who @mention you, but also every retweet, favorite, or new follower you get. We found this to be a much better overall picture of your engagement with the Twitter community than just simple mentions, so this is a useful tool to have as a column. The "activity" tab, on the other hand, is a firehose of all the retweeting, favoriting, and following that the people you follow do. It can be a bit intense, but it's another useful way to find good users or content form those you choose to follow. 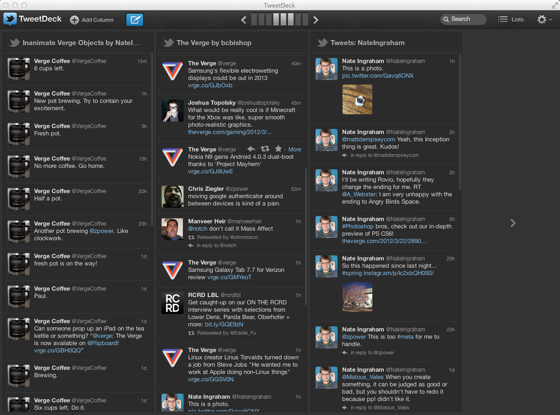 Another big new change comes in the form of list functionality. The old TweetDeck basically didn't have it — you could add lists as columns, but that was about it. Now, you can create full lists directly within TweetDeck, which works just as you'd expect it. There's a helpful new "lists" button in the top right of the app which takes you to a view of your lists, and those that you subscribe to. From there, you can add those lists as columns or create your own. Just give it a name and description, set the privacy policy (it's set to public by default), and start searching for users. It's not exactly a revolutionary feature, but its inclusion helps remove reliance on Twitter's web interface. Similarly, you can finally add or remove users from lists directly from their profile in TweetDeck — another overlooked feature we're glad to see here. 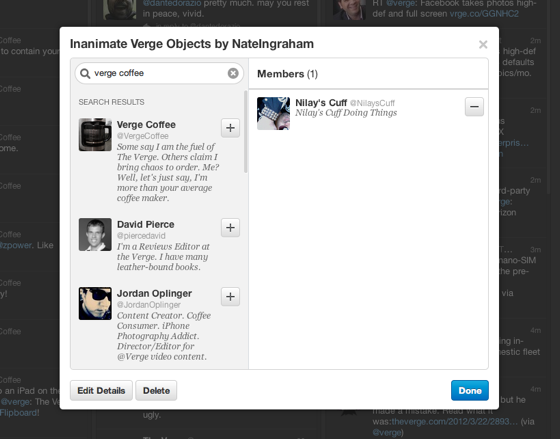 TweetDeck also supports in-line picture and video viewing. Again, there's nothing surprising about this feature, but its omission in the previous version was incredibly galling — jumping back and forth from TweetDeck to a browser every time we wanted to view an image was an infuriating experience. That's all a thing of the past: images show up in small thumbnail previews, and clicking on the image gives you a full size preview in TweetDeck. A variety of services are supported, including Instagram. The same holds true for video; playing a YouTube video right in TweetDeck worked like a charm.

The last headlining change is small (but welcome, yet again): clicking on the "retweet" button now gives you the option for the official Twitter retweet or an "edit and RT." This replaces "quote tweet" from the older version and adds "RT @user" to the beginning of the selected tweet, rather than simply dropping quotes around the tweet. If you're still a fan of the old-school retweet, you'll be pleased with this change.

All of these changes should have been in TweetDeck 1.0

Overall, none of these features are groundbreaking, or new to Twitter itself; you could argue that they all should have been in TweetDeck 1.0 when it was released. There's no changing the past, but this update makes TweetDeck 1.3 a much more viable option for those who miss the TweetDeck of yore. The support for social networks besides Facebook, and the many tweaking and customizing options, is apparently long gone. Still, all but the most demanding users should be reasonably happy with this update. For our part, TweetDeck has just earned itself another shot.