Spotify's "next generation" apps are handsome, but ultimately useless because they're essentially music catalogs for record labels.

Share All sharing options for: Spotify's new apps are handsome but useless (hands-on)

Spotify today bolstered the capabilities of its desktop application with a second wave of music apps like Def Jam, Matador, Filtr, TweetVine, and Hot or Not. These new entries build on the app platform Spotify created last November, which has already amassed over 13.1 million hours of usage. The company hopes to become "the OS of music," but thus far has only become the OS of simple playlist sharing except for a few quality apps like Pitchfork, Rolling Stone, and TuneWiki.

Do the apps launching today add a new dimension to Spotify's app platform, or do we only get more of the same? Read on to find out! 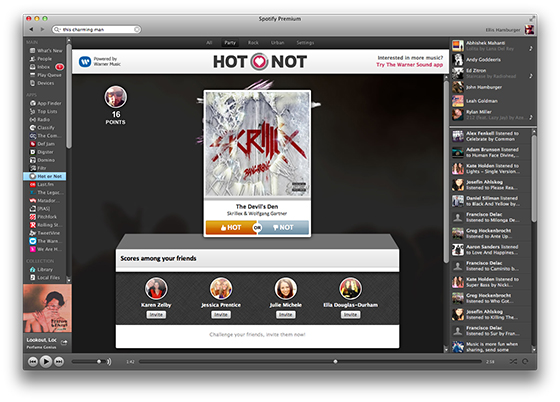 Hot or Not is by far the most playful app of the bunch. It takes Turntable.fm yea/nay voting dynamics and gives you points based on if the masses agree with you about the hot-ness or not-ness of a song. The app keeps track of songs you've liked, and also lets you choose genres if you want to let the music play on its own and judge at the end of each song.

This is one of the most rewarding new apps to check out because it highlights (and lets you interact with) the liner notes once so meticulously designed by artists. The app's artist landing pages trump Spotify's by a long shot. One cool feature is that if you visit an artist's page inside the app, you can subscribe to his or her "Complete Collection," which adds a playlist to your sidebar containing every song by that artist. 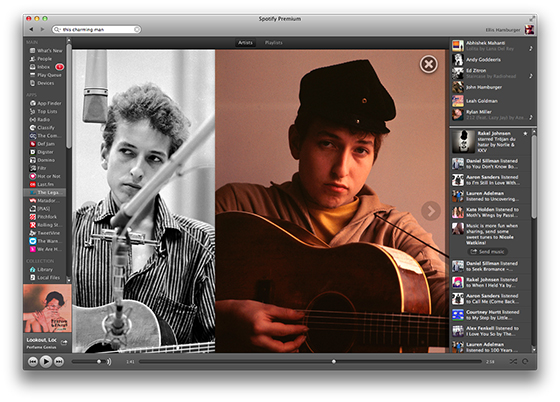 The Legacy Of picks a few artists each week (like Bob Dylan, Miles Davis, or Hall & Oates) and highlights them beautifully using giant page-spanning images. Here's an instance where external media is used very effectively inside a Spotify app. There are also brief bios for each artist and playlists of their tracks, which is what you'll find in other Spotify apps, but the difference here is that the entire experience is more specific and less a list of artists and playlists.

TweetVine is an intriguing concept — real-time Twitter trawling to create playlists from what people are talking about right now — but it only registers songs that have been tweeted with the hashtag #NowPlaying. Unfortunately, there aren't many people tweeting songs alongside that hashtag, so the resulting playlists don't offer many new or interesting suggestions.

The New York-based classic hip hop label's app may include some solid playlists from the likes of its VP Shawn Coster and curated playlists about "The Rocafella Years," but for now, this app is little more than a Def Jam landing page.

When you first open Digster, it asks you to re-log in to Facebook (even though you're already logged in through Spotify, most likely). Then, you'll see the app's main attraction, curated playlists like "Classical for Movie Geeks," and "Top Diva Anthems," all grouped by mood like "Workout," "Romantic," or "Road Trip." The only redeeming feature here is the presence of playlists you can subscribe to created by relevant artists like Florence and the Machine, Lana Del Rey, and Lady Gaga. Each playlist is also tagged by a mood like "suitable for party." 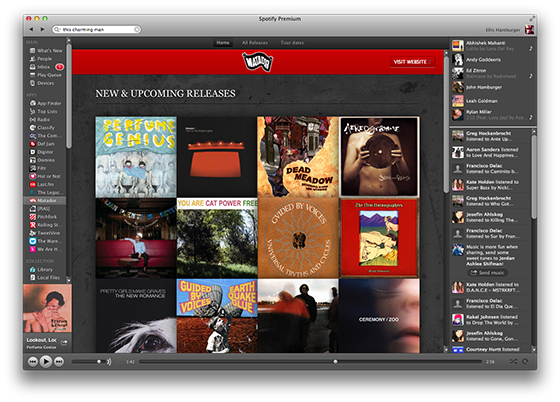 Visiting Domino's Spotify app is far more pleasing than visiting Domino's website in your effort to find music, yet the app features little original content. If you click Franz Ferdinand inside the Artists section of the app, it pops you into Spotify's artist page for the band. Matador's app is more of the same, but at least features a tour dates page as well as a grid of albums you can view sorted by the year they were released by the label.

Conveniently located in the top right corner of every page inside the Matador app is a "Visit Website" button that begs to be clicked, as if the app is nothing more than a pop-up shop at a music festival. Warner Sound's app takes it up a notch with three link-outs per page — one for Facebook, Twitter, and the Warner Sound website — all of which remove you from the Spotify app experience. The only originality this app provides is inside the "Family Tree" area, where you can check out micro-playlists of songs that allegedly influence bands like The Black Keys and Fun.

This app attempts to scan your library and/or the tastes of Facebook friends to build playlists for you. In our tests, neither worked very well. On the first "Instant Playlist" we created, "Spice Up Your Life" by the Spice Girls and "Milkshake" by Kelis made appearances. No thanks. The Belle and Sebastian Instant Playlist we made turned up more relevant songs — but they were sandwiched between oddball picks like Gavin DeGraw, and yes, more Spice Girls. 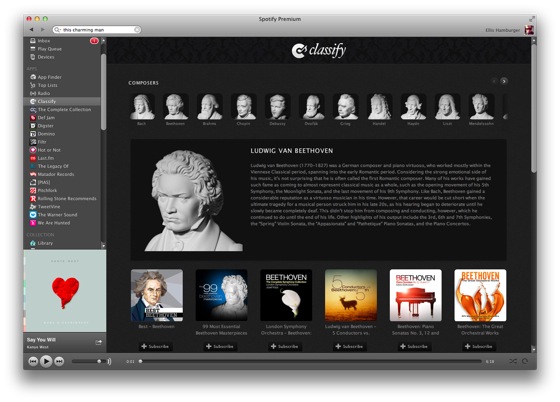 Ever want to dig in to classical music but haven't had the time? Classify makes browsing composers as well as the orchestras playing their music elegant and intuitive. Each composer gets their own bust and biography (see above), complete with several albums to get you started on their music. As a clean, curated introduction to the basics of classical music, Classify might be the most useful app of the bunch.

Ultimately, the second wave of Spotify apps is all about curating record label content and making music you're already somewhat familiar with easier to discover. There's very little new here besides playlists created by people, robots, or labels hoping to resurface old content. Most of these new apps are good-looking (at best) music catalogs, and they're often little more than simple playlists. Want "High Fidelity"-esque recommendations for the best of '70s punk, early '00s ambient music, or the ultimate list of booze-soaked southern rock? Keep looking. Even if you do decide to add one of these new playlists to your Spotify library, you're almost always "whisked back into Spotify's traditional playlist UI without a banner or indicator that you've been browsing an app like Rolling Stone," which is what we wrote about several of the first wave of Spotify apps. Spotify hasn't opened up its mobile apps to experiences like these quite yet, and we aren't in any hurry to try them out.

Spotify apps still feel like shells of what they could be, gimmicky packages of playlists stuffed into visually appealing boxes. And this wave doesn't even include clever apps that mashup things like lyrics, reviews, or karaoke data with Spotify's underlying music layer. Classify does a good job with its helpful approach to exploring a genre, and helps to answer the question, "what music should I listen to?"

How about apps to expose users to genres that are ordinarily less accessible like World, House, or Dubstep? How about more apps from music publications that let you dig back into the archives and read reviews of a Doors album while you listen to it? Until Spotify makes good on its goal to become "the OS of music," we'll just have to keep listening to the playlists our friends have thrown together.