Intel may be cooking up a single fanless quad-core piece of silicon that includes Ivy Bridge graphics on board.

Now that tablets and ultrabooks have effectively displaced the netbook class of computer, the Intel Atom chips that powered them don't seem quite so interesting anymore... but what if we told you Intel might be cooking up a single fanless quad-core piece of silicon that includes Ivy Bridge graphics on board? Well, we can't tell you that definitively, but it's sure looking to be a likely scenario come 2013, as both an official Linux driver push from Intel and a leaked roadmaps from embedded computer company Advantech point to the existence of a 22nm Intel "Valley View" SoC. 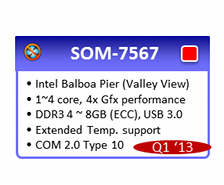 We'd previously heard that Intel was planning to release a 22nm chip in 2013 with a brand-new architecture, codename Silvermont, with the company's new 3D transistors on board. The leaked presentation just so happens to describe a 22nm SoC called Valley View, which also names a "Balboa Pier" as its likely chipset. Furthermore, a second slide describes a possible fanless Valley View system with up to four cores, up to 8GB of RAM, USB 3.0, and up to four times the graphical performance of previous Atoms, which used an Imagination Technologies PowerVR graphics rather than in-house technology. That 4x figure doesn't seem all that odd, if you take Intel engineer Jesse Barnes' word: "ValleyView is a CedarView-like chip but with an Ivybridge graphics core."

2013 is still a good ways away, and by then we could have ARM chips that are even more powerful still, but it might be interesting to see an Atom resurgence with far greater graphics at the helm.