Microsoft is running a promotion to let retail store shoppers swap their smartphones for Windows Phones as part of its latest "Smoked" challenge.

Microsoft is turning its $100 "Smoked by Windows Phone" campaign into a $1,000 challenge at its retail stores across the US this weekend. Visitors can walk into a Microsoft Store between 9AM and 10PM local time to challenge Microsoft to a Windows Phone speed test — winners will walk away with a Hunger Games Special Edition PC and "losers" will be offered the opportunity to swap their current smartphone for a Windows Phone. There are 10 prizes per store each day.

We spoke to one person familiar with the promotion, who confirmed that Microsoft will accept modern smartphones like iPhones, Android handsets, and RIM's BlackBerry devices. Shoppers will be asked to sign a release form to use their story in future advertising and there's a number of strict rules involved — including a limitation to one attempt only. Microsoft Store visitors won't have to hand over their phone at the end of the challenge if they don't want to, but they will get the opportunity to swap it for one of the latest Windows Phones (excluding the Nokia Lumia 800) without a contract. The $1,000 Windows Phone challenge starts today, as part of The Hunger Games opening weekend, and will end on March 29th. 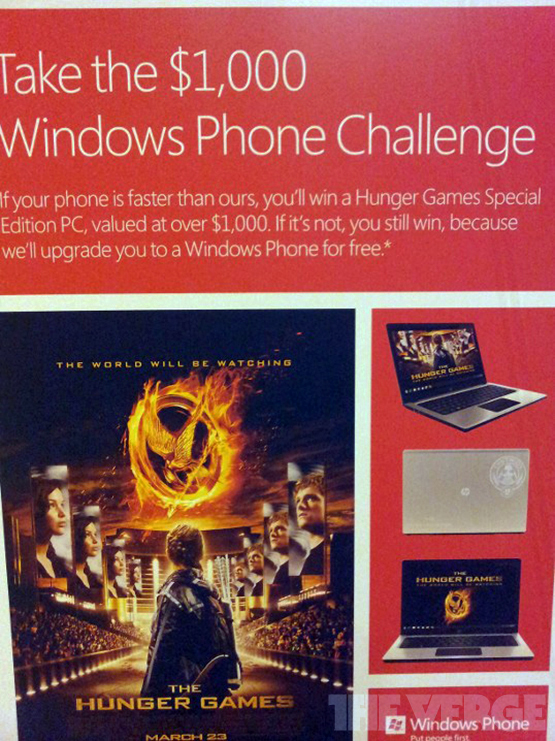