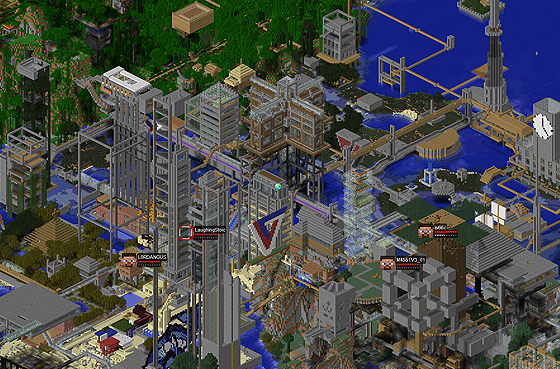 We will use this thread to track updates and announcements for the Vergecraft server. Since the launch, our guests have shown some incredible creativity, talent, and enthusiasm, and we're thrilled to be able to hang out with you in the Minecraft world!

By popular demand... a live-updating, dynamic server map on the web!

We're really excited to announce that new server map is now available on the web. Players can view Vergecraft in two perspectives: a flat overhead map, and an isometric high-resolution map with incredible detail. The web map allows players to communicate with those in the server through the browser, and to see the live locations of players in the world!

Please note that the rendering process is slow given the amount of detail we are enabling, so it may take a little while for the map to fully generate. We will update the map with locations soon.

Given the unexpected attention to detail and the number of quality projects now in the server, we are implementing a new building style policy. While we want to encourage a wide variety of play styles and personal design preferences, some structures do not fit with the aesthetic that has emerged on the server.

Here are the new design guidelines:

1. No "sky buildings." Players are not permitted to build structures that float in space. When building, please attempt to design your structure so that it loosely conforms to the implications of gravity. This means that buildings should be semi-realistic in nature, with supports that touch the ground. For reference, please see major buildings in Verge City surrounding the Nexus.

2. Please phase skyscraper construction from the bottom up. If you decide to build a substantial structure, please do not begin by building single-block towers that reach up past the clouds. It is preferable that you build upwards one floor at a time.

3. No major changes to existing structures without permission from its owner, especially public transit works. Please do not modify major railways or walkways from their original design without consulting a server administrator. Note that creating connections to railways or walkways is generally acceptable.

The Vergecraft Gazette, Edition No. 2

Verge City has exploded from its humble beginnings and is now a bustling center of commerce, transportation, and culture. From the newly designed Nexus, to the emerging city skyline, to the Spleef Arena, there's more to see and do in Verge City than ever before! Contact LaughingStoic for a free public apartment if you are new and require space in the city. Or, feel free to pick an open plot of land in the city and make your own mark.

From the Office of Public Safety

Crime rates in Verge City and surrounding areas have leveled out and are much lower than during the launch. Please stay vigilant, as serious but isolated griefing incidents have been reported.

From the Verge City Spleef Association

Minecraft's biggest game has arrived in Verge City! Spleef is a game that pits two or four competitors against one another in a game of speed and skill. The objective is to dig out the ground from beneath an opposing players feet, causing them to fall -- if they fall first, you win! You can sign up for the Vergecraft Spleef Tournament 2012 in this forum thread. Big thanks to BenCrazy424 for creating the Verge City Spleef Stadium, and thanks to Entegy and his crew for managing the tournament.

From the Verge City Transportation Authority

A new subway transit system now runs beneath Verge City, and beyond! This impressive system can be accessed within The Nexus (spawn), or at Grand Central Station, which is directly below the spawn area. Different color-coded lines will take players throughout the city, and to the city suburbs. A new Vergecraft Regional Transit line has also been created, that players can use to access Seatown and the Oceana Mega-Pyramid -- the total round-trip rail time is around 20 minutes! Be sure to take a ride if only for the scenery. Special thanks to Connor Turnbull and others who assisted in the creation of the subway system.

From the Office of Major Projects