PCWorld has now run a gamut of tests comparing the new iPad with the iPad 2 as well as the Asus Transformer Prime and Galaxy 10.1 LTE, and the tablet with a retina display did top out the heat charts. However, the increase is rather minimal.

Following last week's concern over overheating iPads, PCWorld has now run a gamut of tests on the new tablet and says it "could not replicate the disturbingly high temperatures" being reported by some sources. Specifically, Consumer Reports pegged the tablet at a max temperature of 116 degrees. PCWorld compared the new iPad with the iPad 2 —as well as with the Asus Transformer Prime and Galaxy 10.1 LTE Android tablets — and though Apple's latest topped out the heat charts, the increase is minimal. The new iPad topped out at 100 degrees at its hottest point when charging and after playing a game for an hour — two degrees hotter than the 10.1, five degrees more than the Transformer Prime, and six degrees more than the iPad 2.

PCWorld's results line up well with a recent test from Dutch website Tweakers.net, which found the new iPad ran 9.6 degrees warmers than the iPad 2 at 92.5 degrees. Apple says that the new iPad is "operating well within our thermal specifications," and these numbers suggest isn't too much to be concerned about — but that doesn't mean this will be the last we'll hear about this issue. 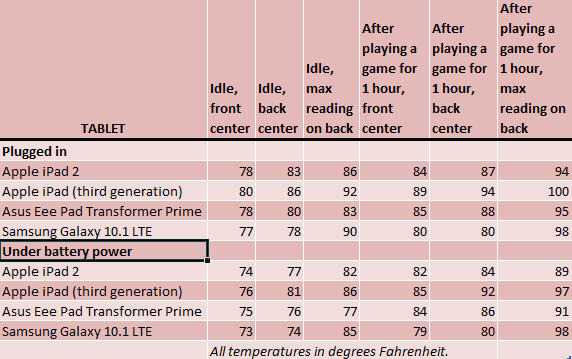