Windows Phone's lack of top applications has been discussed a few times before, but it appears that Microsoft has plans to address it. ZDNet has managed to secure slides from Microsoft's marketing group that reveal the company is setting aside $10 million to "ring-fence" the app developers behind Pandora, Bump, and Instagram, who aren't building Windows Phone versions of their popular apps.

Other information gleaned from the slides reveals a focus on quality apps, not quantity and for the company's marketing efforts highlight built-in Windows Phone functionality. Microsoft also details ways to "tie exclusive apps to appropriate devices" in an effort to "capitalize on exclusivity," and ways to price games at parity with the iPhone — one particular source of criticism from early Windows Phone adopters. Whether or not Microsoft's $10 million marketing effort will convince companies like Pandora and Instagram to focus on Windows Phone remains to be seen, but Microsoft aims to "close all gaps in top 25 apps" by the end of Q2, 2012. 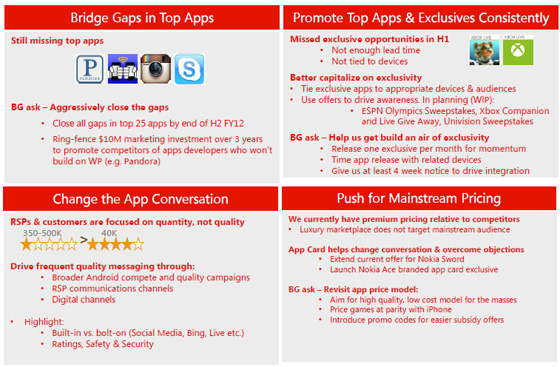