The Australian Competition and Consumer Commission is taking action against Apple's misleading advertising of the iPad Wi-Fi + 4G in countries where it's not actually able to offer any local 4G connectivity.

Unlike the iPhone 4S, the new iPad can be bought with legitimate 4G connectivity on board. The limitation of that feature, however, is that it only works in North America. You can buy an "iPad Wi-Fi + 4G" model anywhere in the world, but it's only on AT&T in the US or Bell, Rogers or Telus in Canada that you'll be able to enjoy actual LTE connectivity. Needless to say, that can mislead (and ultimately frustrate) users who might reasonably have expected a product with "4G" in its name to connect to their local 4G network — an issue that has been taken up by the Australian Competition and Consumer Commission.

The ACCC is unhappy with Apple's marketing and sale of the 4G iPad, alleging it infringes four sections of the Australian Consumer Law, and will tomorrow make an application to the Federal Court in Melbourne for an injunction against the US company. The full list of ACCC demands sounds suitably inflated, including monetary penalties, corrective advertising, and refunds made to disappointed customers. We don't know whether any or all will be granted by the court, but we're inclined to agree with the ACCC's complaint: the world isn't yet globalized to the point where a company can advertise features that are only available in another country — which in Australia's case happens to be almost literally on the other side of the planet.

In Apple's defense, the company does acknowledge what LTE networks its 4G iPad is compatible with, highlighting HSPA+ connectivity for other markets. 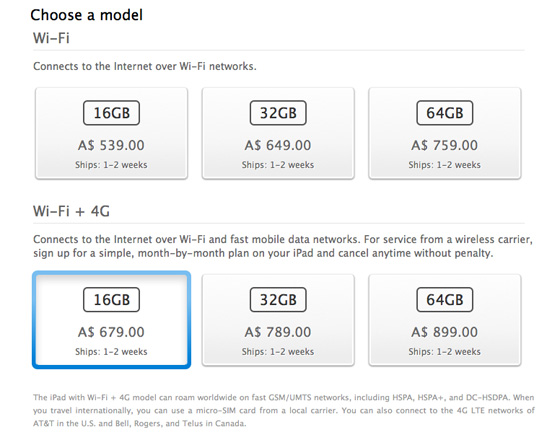