Cadillac has introduced a number of new safety features as extras on its 2013 XTS and ATS sedans, using cameras, radar, and ultrasound to detect potential collisions and a vibrating seat to alert the driver.

Share All sharing options for: In new Cadillac sedans, vibrating seats warn you of impending danger

Cadillac is introducing Driver Awareness and Driver Assist packages on the 2013 XTS and ATS sedans, bringing together an array of cameras, radar, and ultrasonic sensors to help drivers avoid collisions. The main feature is the introduction of a new vibrating safety seat which indicates the direction of a hazard, providing haptic feedback to a driver through the seat and giving them more time to respond. Alerts are issued if there's a potential collision — as detected by the radar and ultrasonic sensors around the car — or if the driver begins to cross lanes without activating a turn signal. Using vibrations in the seat cushion to alert drivers if they drift into the next lane was first employed by Citroën in its 2005 C5, however Cadillac says that the directionality of its new system should help drivers to react faster.

The cameras located on the front and back of the car look for potential collisions, warning the driver if they come too close to an object or even if another car could drive into your path as you reverse. Combined with the proximity sensors, the car is also capable of braking automatically if it detects an accident is imminent. Cadillac says that the two packages incorporate a number of features from its sensor function project, which ultimately aims to produce a self-driving car. The Driver Awareness package is available on the XTS this spring and the ATS this summer, with the Driver Assist package (incorporating features like automatic braking) following for both cars in the fall. 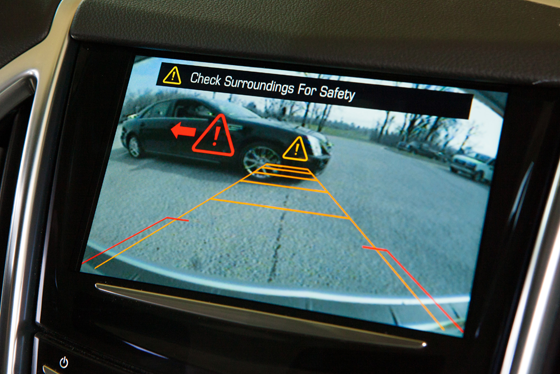