Paper: the next great iPad app, from the brains behind Courier

Is this the drawing app you've been waiting for?

Georg Petschnigg throws his hands into the air as he traces the ages of human evolution that led us to develop the fragile wrists we need to use tools. Petschnigg locks his wrist into place and pretends to scribble on an imaginary piece of paper, in the process lamenting the user interfaces we've come to accept from computing platforms. "How do we get back to creating?" he asks. "Developing ideas began as just dragging a stick in the sand."

Today, we mostly use our fingers to interact with touchscreens — the increasingly predominant means of controlling computers — but Petschnigg isn't content with that. It's not just about the fingers; it's about the paper we're drawing on, and iPad apps built for creating just aren't cutting it. He, along with a small group of talented developers, has been trying to fix the problem. "We've just burned down our savings on this," Petschnigg said. "We wanted to build tools we could use every day."

Sticky TOC engaged! Do not remove this!
Interview 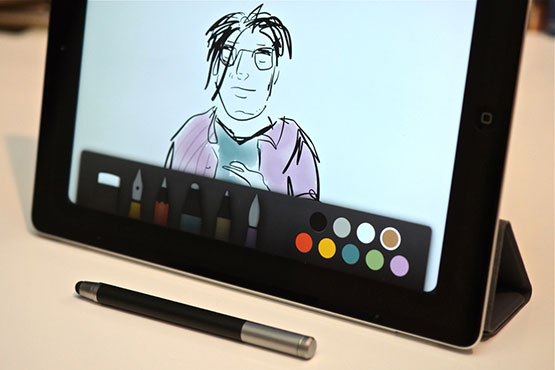 The tool Petschnigg and his company FiftyThree thought up is the aptly named Paper, designed exclusively for the iPad. It's essentially a blank slate of paper devoid of settings panels, menus, and adjustable line widths. If Paper looks familiar, it's probably because the team behind it has an interesting history: a handful of them spent several years at Microsoft, with a good chunk of that time focused on the Courier, a dual-screen, digital notebook which had the tech world salivating. That device and its software was very publicly killed by Microsoft, but you can see threads of it that survived in this new project.

Still, the FiftyThree team is reluctant to admit that there's Courier DNA in Paper, perhaps only because the project they so passionately incubated never came to be. Whatever the case is, the humanistic sensibilities that made the Courier so attractive are very much present in this app, unbound from the chains at Microsoft. And that’s a very good thing.

When you first open the app, you first see a panoramic view of all of your notebooks floating in mid-air. Each notebook looks like a premium Moleskine journal, fit with a stunning cover and pages that look soft to the touch. When you tap a notebook, you're launched into a CoverFlow-esque page browser where you can thumb through sketches in your notebook. Tap a new page and your entire screen turns an almost white shade of vanilla, unadorned by faux binder rings or ripped edges you see in other apps.

Swipe up from the bottom of the screen to reveal your artist's palette, and swipe down again to hide it. Paper comes with an eraser and just one tool to draw with, a fountain pen that's unlike any fountain pen I’ve used. The faster you move your finger, the thicker the line gets. For $1.99 each, you can purchase four other tools, denoted not by their conventional names but instead by utility: there's Write (ballpoint), Sketch (pencil), Outline (marker), and Color (watercolor paintbrush). Each of the five tools has its own unpredictable personality worth mastering, which makes these instruments so much more interesting than conventional digital pens and pencils you can find in other apps. The FiftyThree team chose these five tools because they encompass the five most common scenarios they encounter when mapping out ideas and art on a daily basis.

Do you remember the last time you used iOS’s "shake to undo" feature? Perhaps the most impressive tool in Paper is Rewind, an inventive take on "undo" that succeeds where others have failed. If you make a mistake while you're drawing, there's no need to erase it. Just place two fingers on the screen and move them in a counter-clockwise motion. The app retraces your steps, brush stroke by brush stroke, to a maximum of 20 previous moves. Once you've tried Rewind, you'll wish it were present in every other creative app you've tried. It's a user interface breath of fresh air invented by filmmaker (and FiftyThree designer) Andrew S. Allen, who wanted an "undo" method that worked like the jog dials he uses to go back and forth in time while editing video.

To move back and forth between pages while working, you can swipe inwards from the left or right side of the iPad's screen to change pages. To close your current page, pinch inwards with your fingers and you'll see your notebook's pages at a glance. From this view, you can trash a page, add a page, or share your page to Tumblr, Facebook, and Twitter. And that's really about it. Paper is very intuitive to use and has almost no learning curve, which is aided by its smooth animations and realistic design. Paper takes advantage of OpenGL graphics generally reserved for gaming to produce realtime shadows, swift page turns, and lightning fast pinching and zooming for popping in and out of your notebooks. Graphics are one of the many elements of Paper that feel "right" from a design standpoint. 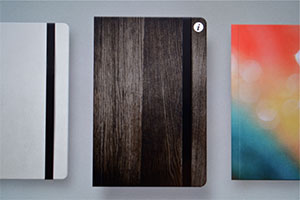 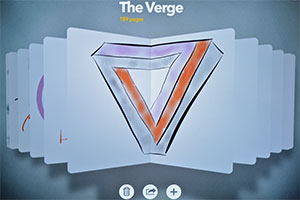 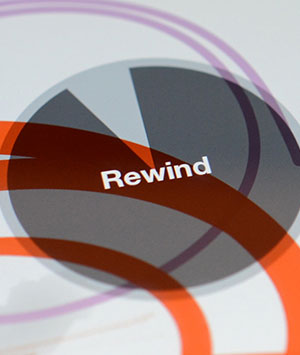 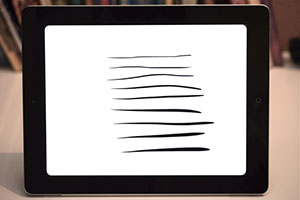 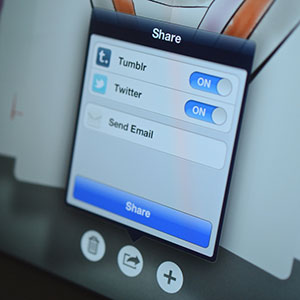 The team spent months painstakingly figuring out how to emulate materials on a digital screen. For example, they had to understand how lead plays on the texture of paper, and how pen ink moves when you apply an artistic wrist flourish. Even more time was spent getting watercolor paint to bleed just right when you hold down your finger in place. Swipe your finger side to side quickly and the watercolor smudges like you'd expect it to. The point here is providing real tools to use every day while sketching, drawing, and creating — and to that extent FiftyThree has succeeded.

The iPad is already a blank slate, a canvas for making art, playing games, checking email, and surfing the web. While digital newspapers made their way to iPad years ago, plain old pen and paper have been a bit slower to adapt. There are plenty of apps like Penultimate, UPAD, and NotesPlus that let you draw, make annotations, insert text, and import pictures, but there aren't many apps that strive to give you the same experience as staring at a blank page with nothing but a pencil or pen in hand. And that's where Paper excels. Petschnigg explains, "Paper is the place to spend time with your ideas," a clutter-free environment that pretends it’s a simple pad of paper. The app doesn't include many features, but the ones it does include are fine tuned to the nth degree.

It's clear that the Paper "philosophy" transcends the application itself. The press release FiftyThree sent us was written in plain text and saved inside an Rich Text File instead of inside a PDF or Word document. The app has no menus, folders, or buttons, save for an export arrow, a plus sign for new pages, and a trash can button. When you tap the trash can, the paper in front of you crumples up into a little ball and vanishes into the ether. You can't even re-arrange your notebooks — they are stuck in the order you created them in from oldest (at left) to newest (at right), emulating the pace at which artists work in real life (according to Allen). 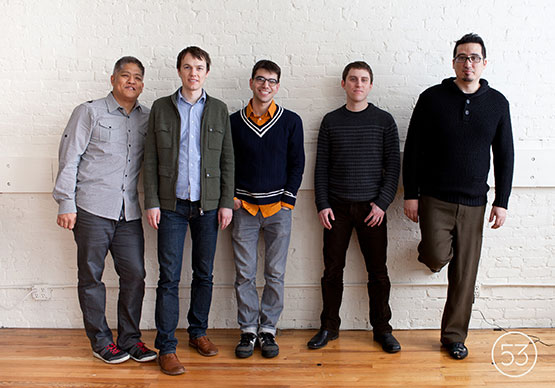 Paper almost begs you to use a finer utencil than your finger to draw with. FiftyThree endorses the Wacom Bamboo stylus on its website, which we tested out, and weren’t very impressed with it. It has a mushy rubber tip that didn’t always seem to register with the iPad’s capacitive touchscreen. Petschnigg realizes that there isn’t an ideal stylus solution available, and is open to embracing new tools that could work with paper (like the Blue Tiger, an upcoming stylus that has a built in pressure sensor. Petschnigg also expressed interest in providing more tools for people in different fields — it’s just a matter of what customers demand, he says. Until then, Paper is not nearly complete.

In its mission to simplify drawing and scribbling on an iPad, FiftyThree did miss a few key things we’d like to see in the next version. First, while experienced sketchers know not to rest their hand on a piece paper (to avoid smudging their work), plenty of people will do so instinctively. Unfortunately, Paper doesn’t register touches if the side of your hand is resting on the screen, which makes writing anything more than quick notes or text inside diagrams frustrating. Apps like Penultimate have come up with elegant solutions for solving this problem, and we’ve been told that Paper will get this feature soon. Second, Paper can sometimes be a bit slow to register your brush strokes, though it’s not very noticeable unless you’re scribbling frantically. Some other apps we tested appeared a hair faster (like Bamboo Paper for iPad), but these apps draw simple lines whereas Paper draws textured lines that require more processing power. And lastly, we’d be remiss if we didn’t mention that our new iPad got warm after twenty minutes of drawing in Paper — warmer than if we were browsing the web for twenty minutes, as a point of comparison. 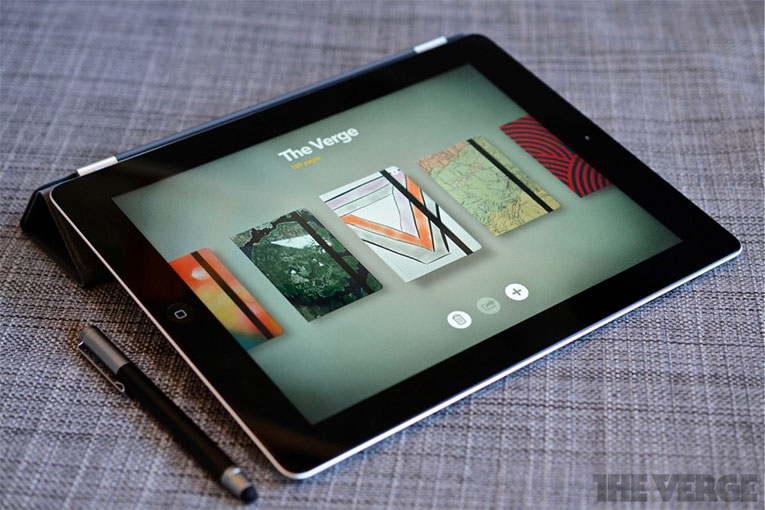 "People are at their best when they're creating," Petschnigg told us; he and his team don't want to hinder creativity or distract people in any way. "When you're moving about the world, you don't want to be futzing with settings." There’s no place to find more settings than inside a Microsoft Office product, which Petschnigg worked tirelessly on for years. After years of working on settings ribbons and menus that only a small percentage of people actually dig into, Petschnigg was finished with complicated applications. Paper, like Clear for iPhone, is perfect if you’re looking for a simple application designed to accomplish one goal. Most developers provide paper apps cluttered with hundreds of tweaks and settings. In Paper’s case, that goal is to provide a digital pad of paper, the likes of which we’ve been hoping for since the iPad launch — an app free of icons and folders and settings and menus.

Grab Paper from the iTunes Store.