One year ago, Samsung released the Series 9 laptop, and at the time, we'd never seen a more premium Windows machine. It was thin, light, visually striking, and choice components filled the svelte machine, including a comfortable backlit keyboard, a fast SSD, an aluminum alloy chassis, and a wonderful matte screen. If it weren't for the 13-inch computer's $1,649 price tag (which admittedly fell to $1,399 after a few months), it might have been a roaring success.

As is, it was good enough for Samsung to give the formula a second chance. The updated 13-inch Series 9 is even thinner and lighter than its predecessor — at 12.7mm thick, it could be the thinnest of them all — and at 14.7mm thick, the brand-new 15-inch Series 9 is definitely the slimmest 15-inch laptop around. Is there no end to how thin these machines can get before compromises rear their ugly heads? Does that thinness make up for price tags that are still quite high to begin with, when the specs (a 1.6GHz Core i5 CPU, 8GB of RAM, integrated graphics) are basically the same?

If I had to distill the essence of the new Series 9 down to a single word, it would be "refined." Last year's model already had a sleek, minimalist design, but it looked a little bit too glossy, a little bit too plasticky, and perhaps a little bit too cheap. This year, the Series 9 somehow manages to simultaneously look subdued and sexy. Gorgeous expanses of textured matte black aluminum form all the primary surfaces, except for a shiny brushed aluminum rim: it runs around the entire base and lid of the machine, forming a fantastically flashy profile that draws attention to just how thin Samsung managed to make this PC.

Like the front lip of the Envy 14 Spectre, the matte black base of the Series 9 gently curves inwards, such that the laptop looks even thinner than it really is — like that silver rim is floating on air. The chassis construction is also top-notch: just like the MacBook Air, it's an extremely solid unibody aluminum frame, with just a slight seam showing where the bottom cover was carved out of the block. Also like the MacBook Air, the frame does tend to creak on occasion when you pick it up, and the matte black surfaces here do pick up quite a few fingerprints. My only major complaint with the design is Samsung's new lid hinge, which is both hard to open and a little wobbly when the screen is upright.

The silver rim also highlights a decent port selection. While you'll unfortunately have to settle for miniature HDMI, VGA and Ethernet ports, each of which require their own breakout adapters (the far-too-easy-to disconnect Ethernet one is included in the box) you do get one full-size USB 2.0 port on the left and two USB 3.0 ports on the right, as well as a clever SD card slot that tucks into the bottom of the frame under a small spring-loaded door. There's also a 3.5mm headset jack on the left, and a spot for the tiny power cord.

All in all, though the Series 9's design still cribs quite a few details from Apple, there's enough here to set it apart, and that's before we even consider that Samsung's crammed a 15-inch screen into this 3.5 pound, 0.58-inch thick laptop. Unlike the 15-inch Acer Aspire Timeline Ultra M3, you could actually call this one an ultrabook with a straight face. 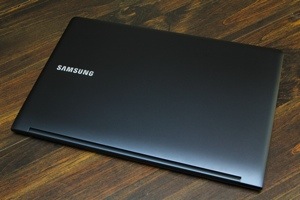 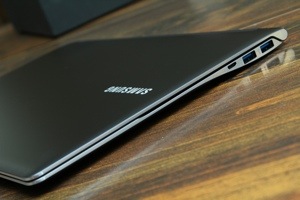 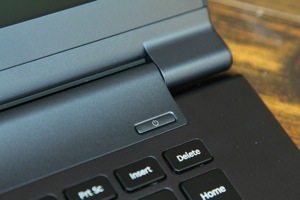 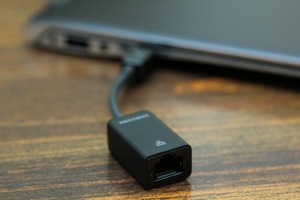 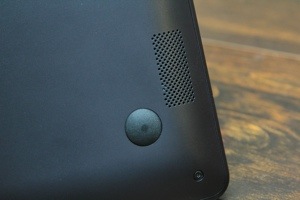 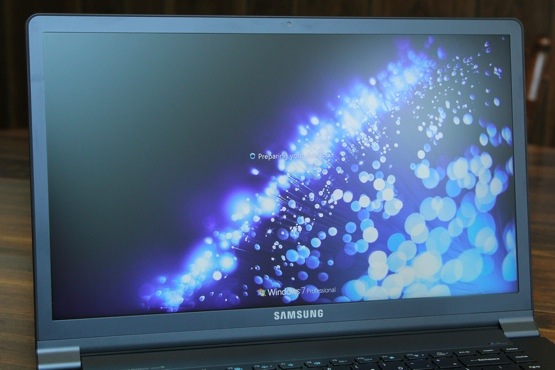 The screen is where my praise for the Samsung Series 9 slows. Let me explain: there's been a trend recently towards thin-bezel displays in new laptops. For manufacturers trying to make a quick sale, it makes a lot of sense. Smaller borders around the screen make it look more desirable, and marketers can boast that they've fit a larger screen into a thinner, lighter machine than was ever before possible.

The problem is that actual LCD screen technology doesn't seem to have caught up, and the first batch of thin-bezel screens look slighly washed out and have iffy viewing angles compared to their counterparts. Samsung's 15-inch display is actually a good bit above average, a nice matte sunlight-viewable panel with a fairly reasonable 1600 x 900 resolution and 400 nits of brightness (that's fairly bright), but vertical viewing angles aren't great, and the laptop's flimsy hinge means they're easy to knock out of alignment. Colors are a bit washed out, and while the gamut isn't nearly as narrow as on the Envy 15, reds do look a good bit closer to orange and violets to blue than I'd hope for. If you're considering the spectrum of Windows laptops as a whole, it's really not bad, but a $1,500 premium machine should have a premium screen to go with it.

Meanwhile, the Series 9's speakers are a joke. They're not quite as bad as those on the 15-inch Acer Timeline Ultra M3 I recently reviewed, but they're not far off: they produce a moderately wide sound field, but they're tinny, harsh and filled with enough static that I found most music and plenty of standard computer sounds unbearable. Dear laptop manufacturers, please take note: don't house speakers inside thin metal or plastic palmrests, and don't point them down. 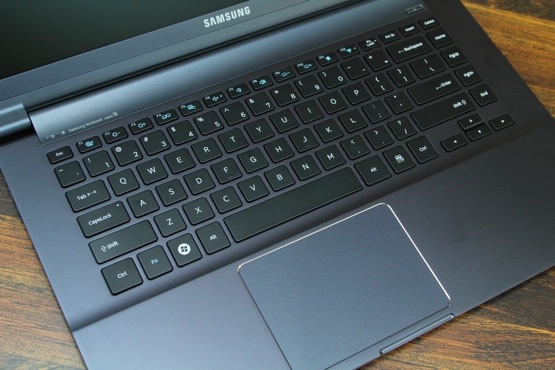 With nicely spaced chiclet keys, subtle mint-green backlighting, a set of Home, Page Up, Page Down and End buttons, and even a dedicated Function Lock button to let you quickly change the likes of brightness and volume without holding down the Fn key first, it's clear that a bit of thought was put into the new Series 9's keyboard. None of that made it comfortable for me to type on, though. The keys are stiff and feel extremely shallow, and between the flat, smooth keycaps and the clicky noises they make when depressed, typing felt like a mechanical chore rather than an extension of my body. Perhaps I'd get used to it over time, and perhaps I've just described your dream keyboard, but I highly doubt it. It's a shame, considering how good the original Series 9's original keyboard felt. 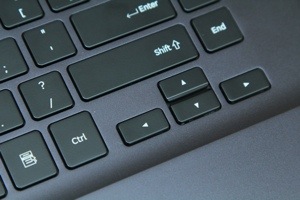 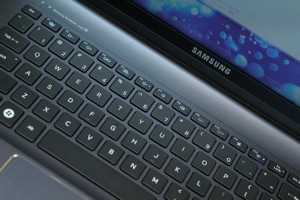 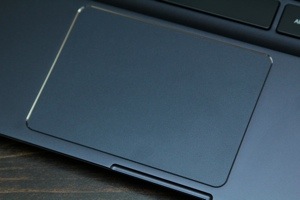 Speaking of the original Series 9, it used a nice Synaptics ClickPad, but the new machine has an Elan pad instead. Both let you depress the entire surface of the touchpad as a button. You won't find any discrete mouse buttons here. Assuming you're using the latest drivers, it's not bad. The Elan pad has a nice smooth physical surface, and most Windows gestures work pretty well, including the critical two-finger scrolling (complete with inertia) and both three- and four-finger swipes for multitasking maneuvers. Still, it's not nearly as responsive as I'd like, and using it is a bit of a chore. Compared to a MacBook or some of the better Windows laptops we've used, tap-to-click has a slight delay, pinch to zoom is extremely awkward, and, most importantly, plain ol' cursor tracking (you know, just moving around your pointer) feels abnormally slow even with the sensitivity turned up. It's servicable and I've used far worse, and Samsung says the drivers may improve from here on out. The laptop doesn't ship until April, and I'm already using drivers that are at least one revision newer than the original.

Intel's Ivy Bridge chips appear to be just over the horizon, but for now the Samsung Series 9's specs are just about the same as they were last year: you'll find a dual-core 1.6GHz Intel Core i5-2467M CPU, 4GB of memory and integrated Intel HD 3000 graphics in the 13-inch model, while the 15-incher has 8GB of RAM. Both run Windows 7 Home Premium on a 128GB solid state drive, half the capacity of the original Series 9, and it's not a lot of space: after you count the 16GB Windows 7 install, an 8GB pagefile and an 8GB hibernation file to cover that additional RAM, there's fairly limited room for your collections of music, videos and games. That said, the Samsung MZMPC128HBFU solid state drive is plenty fast: I measured sequential read speeds of over 470 MB/sec and writes of 250 MB/sec, and the Series 9 booted in roughly 16 seconds and was fully loaded in 22 seconds. While it didn't always wake from sleep by the time I opened the lid, it typically took between two and four seconds. Not too shabby.

Like most of its ultra-thin brethren with near-identical specs, the performance is on par, and this hardware is quite adequate for HD multimedia playback and most standard Windows tasks. You still won't be playing much in the way of recent PC games without a discrete GPU, like the GeForce GT 640M in Acer's 15-incher. I also can't say I noticed a difference due to having the four extra GB of RAM, but I suppose it's one less thing to worry about upgrading should that change with future software.

Samsung keeps the Series 9's software package fairly clean, but there's still a bit of bloat: a trial version of Norton Internet Security pops up annoying registration prompts, WildTangent ad-supported game package is here, and then there's the omnipresent Bing Bar. Samsung's also got some software of its own loaded on the Series 9, including a hovering dock, auto-update software, and an AirPlay competitor called EasyFileShare, though since you'll have to first install EasyFileShare on every other computer you'd like to connect, it kind of defeats the purpose.

There is one diamond in the rough: the Easy Settings panel, which is neatly bound to the F1 key on the keyboard. It lets you control hardware features like USB charging, the keyboard backlight, and a battery lifetime extender function, as well as common Windows settings like networking and power saving modes, without having to dig through the operating system to do so. It'll even let you adjust the display very slightly to help counter the washed-out colors — I recommend the "Sharp" mode — and tell you how many watts of power the laptop is consuming at any time, so you can monitor your consumption. 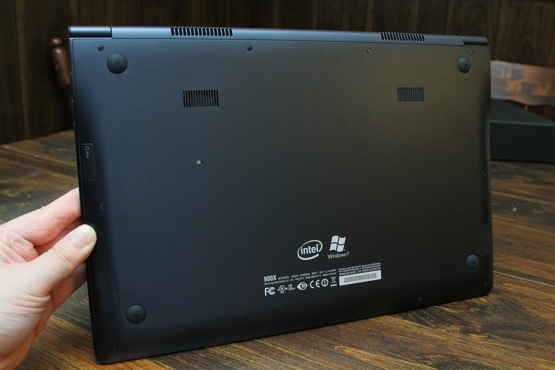 Speaking of power consumption, the 15-inch Series 9 is fairly frugal about that juice. Though I didn't get anywhere near the ten hours of battery life that Samsung promises, my unit ran for a full six hours on our Verge Battery Test, which cycles through a series of popular websites and high-res images with the screen set to 65 percent brightness. I also got about six hours of real-world work done on two occasions, which for me means multiple web browsers filled with auto-refreshing tabs, short video clips here and there, music playing in the background and push email.

To its engineers' credit, the Series 9 stays practically silent and quite cool in operation, too. The only time I ever noticed the fan or palmrests heating up at all was during my benchmark runs, and even then neither noise nor heat distracted me from my tasks.

The Samsung Series 9 is a status symbol, rather than a comfortable user experience

Laptops have always involved compromise: you can't have it all. Generally, though, the more you pay, the fewer tradeoffs you have to endure. It feels that the new Series 9 forgot that in pursuit of visual excellence. Here, $1,500 buys you the thinnest 15-inch laptop on the market, a cool, quiet, beautiful machine with stamina and finess, but without a screen you'll enjoy staring at for hours, speakers you'll want to hear, or a keyboard that's comfortable to use. It's also not really any more powerful than the cheapest ultrabooks available.

The Series 9 is a status symbol, and guaranteed to turn heads, but I never really felt satisfied actually using it. With a little more vertical space for a deeper keyboard, a stronger hinge and a nice 14-inch IPS screen, it'd be a laptop to remember. As is, it just marks the first wave of exceptionally thin machines with larger screens. If you've got the cash, it's a decent choice, but at a precarious time: in just a few months we'll no doubt have laptops with Intel's Ivy Bridge chips for the same price.