'The Fourth Dimension' for iOS: learn to see in 4D (hands-on)

Hands-on impressions of The Fourth Dimension, an app that attempts to explain 4D geometry.

Share All sharing options for: 'The Fourth Dimension' for iOS: learn to see in 4D (hands-on)

The Fourth Dimension is a new app for iPhone and iPad that has a slightly loftier goal than most: it seeks to help its users perceive another plane of existence. The app takes the form of a short interactive book and lets you play around with onscreen objects to glean an understanding of four dimensional geometry. It's conversationally written without the slightest hint of jargon, despite the complexity of the subject on hand, and by the time you're done you'll likely feel like you've learned something. Even if you're not sure entirely what.

We see the world in three dimensions, so the abstract concept of a fourth is a really difficult thing to explain — textbook chapters or even Wikipedia pages with animated GIFs don't quite cut it for the average person. Where The Fourth Dimension succeeds is in showing, not telling. It starts from the very basic, with explanations of the first, second, and third dimensions, and then prepares you for comprehending the fourth by demonstrating how the third must look to someone that could only perceive two. Look at the silhouette of a cube from any angle — it's a 2D shape. Would seeing it from all possible angles help you at least understand the concept of a cube, even if you'd never seen one? 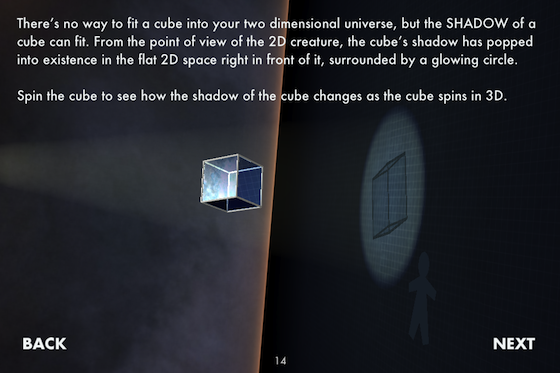 With all this under your belt, you'll be directly manipulating a tesseract, best thought of as a 4D cube. Since we can't see 4D shapes in 3D space (never mind the 2D plane of an iPad screen), the app does a great job of helping you understand what's actually being displayed — similar to how a 3D shape leaves a 2D shadow, the sides of a tesseract are left behind as 3D shapes that we can perceive in and of themselves. As you rotate the 3D "tesseract", you gradually come to an understanding of how it exists in the fourth dimension.

The app is very cool, and it's unlike pretty much anything we've seen in the App Store. Sure, there are excellent educational apps like The Elements and of course Apple's recent iBooks 2 initiative, but The Fourth Dimension takes a different and arguably more interesting approach. It's priced fairly low ($2.99 for a universal iPhone/iPad app) and uses innovative design to explore a single, focused concept, and while you'll be done with it after twenty minutes or so that actually adds to the appeal. It's a bite-sized chunk of brain training that's a lot of fun to wrap your head around, and it probably couldn't have been produced any other way. That's about the most you can ask for in an app these days.