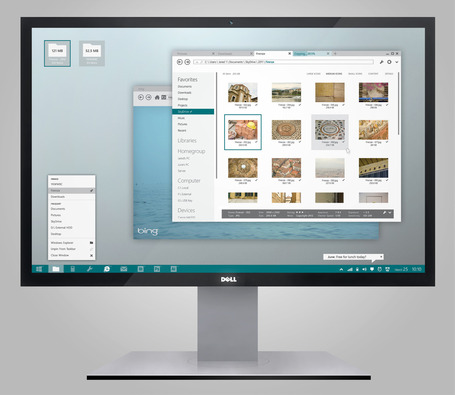 With the appearance of the Metro Start screen in the Windows 8 Developer Preview many of us began pining for a commensurate redesign of the desktop UI. In the back of my mind I couldn’t help but consider the possibilities and promises of a Metro-ized desktop. Spurred on by Sputnik 8’s excellent work as well as the Windows 8 Consumer Preview, I've created a mock-up illustrating my thoughts on an alternate Windows 8 user experience specifically for the PC (read: laptops and desktops, not tablets).

I've written the post in the tone and format of a short editorial review....maybe I've been reading too much tech news! This mock-up in no way comprehensive nor is it entirely consistent with Windows iconography and UI conventions. Regardless, I hope that it contributes something to the conversation. Clicking on each image will open it full-size in a separate window.

The introduction of the Metro design language in Windows Phone 7 signaled a bold and frankly startling break from the past, building primarily upon the Zune/ Zune Player interface. Inspired by the International Typographic Style (Swiss Style) as well as public transportation way-finding systems, the Metro language was clear, clean, and direct....completely unapologetic, not pandering to anyone. With the arrival of the Windows 8 Developer Preview the reappearance of Metro signaled a commitment to this new paradigm not only with a new generation of tablet computers, but with the ubiquitous Windows PC as well. However, with the Windows 8 Consumer Preview confirming the split-personality between the Metro interface and the traditional desktop UI, as well as a fundamentally unchanged desktop UI, hopes for an aesthetically unified experience were dashed.

Unfortunately, in Windows 8 the aesthetic of both the Metro interface and the desktop interface are somewhat apologetic. Metro panders to the desktop with a more subdued color palette and less decisive design compared to that on Windows Phone, and the desktop panders to metro with only a cursory reduction of gradients and a sharpening of corners. And in some instances, Windows 8 Metro appears not focused and minimal but a bit simplistic and unrefined (to be fair it is a beta, although I think this also has to due with the scale of the full-screen metro interface elements on a desktop monitor).

By introducing the Metro interface to Windows itself, Microsoft has the opportunity to familiarize Windows users to this new language and thereby leverage the massive Windows install base to drive adoption of Windows Phones as well as forthcoming Windows tablets. It’s a clever approach, and is in effect the inverse of Apple’s approach of leveraging the popularity of iOS to drive adoption of OSX.

However, after using the Windows 8 preview on desktops and laptops I feel that both the Metro start screen as well as the traditional desktop experience are somewhat compromised....the sudden (and frequent) full-screen transitions between the two are jarring and the age-old Windows desktop frustrations remain (inconsistent UI, muddled and complex settings menus, etc). In many ways, instead of addressing the concerns and annoyances present in Windows 7, Windows 8 creates a whole set of new ones. 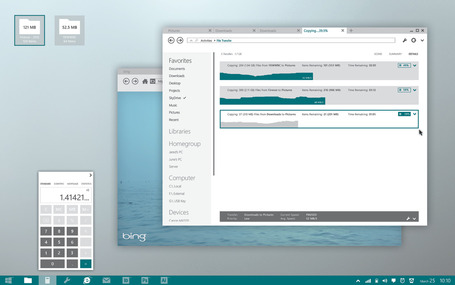 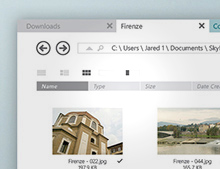 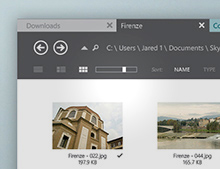 This mock-up for Explorer and the Taskbar is a relatively simple modernization of the existing items. The Explorer interface is simplified and brought more in line with the Metro language, however I've made a conscious effort to retain some distinctions....i.e., most icons and buttons are not set within tiles or encircled, drop shadows are retained in overlapping windows as they inform the user of spatial depth, etc. I personally right-click far more than I use context menus, however a minimal drop down ribbon (not shown) would be available. Taking a cue from the web browser and also shown in Sputnik 8’s work, each Explorer window would support multiple tabs as well consolidate actions like file transfers into a distinct tab (with a activity progress indicated in the tab header itself). Windows Explorer options and settings would also be available in a tab as opposed to triggering a pop-up or requiring a trip to the Control Panel. Jump lists are great and would offer increased functionality....i.e. a right click on the calculator icon would open the calculator as a jump list as opposed to a floating window. I’ve also shown an option for a persistent ‘sort by’ bar as well as color labeling. 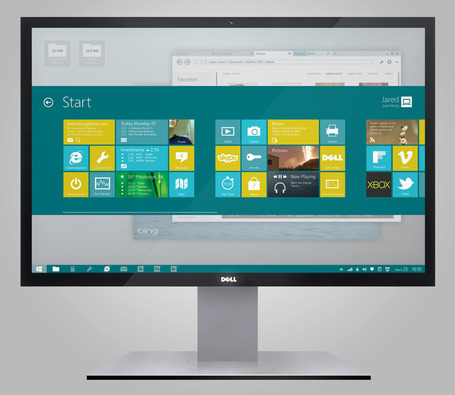 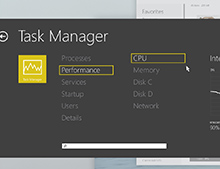 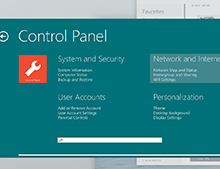 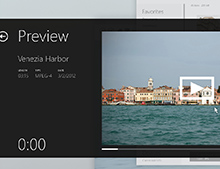 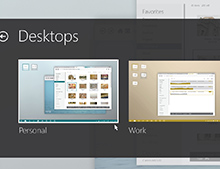 The key concept of the metro interface shown here is that Metro is an overlay on the desktop, the desktop is not a tile within Metro. In this scenario Metro is a ribbon overlay as opposed to a full screen transition and acts as an app launcher, workspace and window management tool, a consistent location for utilities and settings (like the task manager and an OSX style preview panel), as well as a type of widget platform. While most other widget platforms have not succeeded, these have existed largely stand alone layers (and poorly supported ones at that), not as the core paradigm of the operating system.

I am not aware of the code or resource implications of this approach vs. the approach of the desktop as a tile, but ideally new Metro applications could run full screen, being launched from the Metro ribbon, and allowing universal applications to run on PC’s as well as mobile devices.

The Monitor shown is an idealized Dell LCD, replete with touch controls. Dell has produced several series of business products (previous generation Latitude laptops, projectors, printers, etc.) that have a distinct and cohesive design language. Unfortunately they seem to be walking away from this language instead of disseminating and refining it.

Credits: Some icons used are sourced from thenounproject.com under the Creative Commons License. As I completed posting I just came across the incredibly thoughtful Windows 8 Desktop UI Concepts post by Zainadeel. And again, cheers to Sputnik 8 for his (or her) well considered and inspiring work.