(Before anyone accuses me of plagiarism, this is also posted on my personal blog)

I've been running the Windows 8 Consumer Preview full-time since it became available last week and there is a lot to love. I suspect there will be a lot more to love if you're using a tablet instead of a keyboard/mouse traditional PC, but I've been running it on a 15.5" Sony Vaio. Let's talk about metro apps.

The concept of metro apps is great. Relatively simple apps with a directed design language and limited functionality - they can still do a lot but they're limited in what they can do to your system. This is fantastic for when you're on a tablet. I'd really like to use these apps on the desktop too, but limiting them to full-screen or partial-screen instead of little windows really doesn't work for me. The solution of course is let them be windowed on a Laptop or Desktop computer.

For example, Metrotwit. Now it's not a WinRT/Metro app, but it uses the design style of a metro app so it's my example. All Microsoft need to do is allow these apps to work in windows like a traditional app when you want to use the desktop in the traditional manner like so: 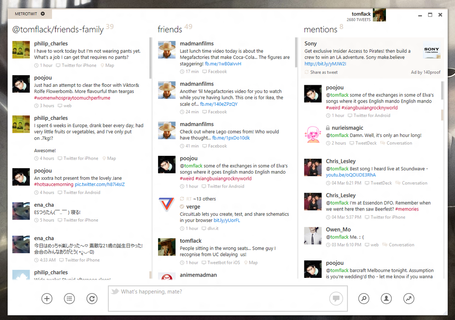 But let's make one tiny change.

Instead of the rectangle that maximises an app on the desktop like we're used to with Windows, I've replaced it with the Windows 8 logo. When you hit that button it goes full screen like how metro apps currently work. If this sounds familiar, it should, because it's almost exactly the same way full-screen apps in OSX Lion work.

The PC can be many things, but throwing out the best way to manage several apps while simultaniuosly enabling developers to create multiple simple little ones is dumb. Hopefully Microsoft don't force us to full-screen all the time.