Sony to bring back VAIO U with 'Hybrid' prototype tablet? (update)

According to Pocketnow, Sony might release a convertible tablet prototype that we originally saw at CES under the VAIO U moniker — a name that's long belonged to the company's ultra-mobile PC line. The device has undergone some changes since we first saw it as a concept.

Share All sharing options for: Sony to bring back VAIO U with 'Hybrid' prototype tablet? (update)

At CES this year we got to take a look at the mysterious Sony "Hybrid" concept PC behind glass and we thought that the convertible tablet looked like it held some promise. However, we were told that the tablet was just a prototype, "merely to show Sony's design prowess." According to Pocketnow, Sony might actually release the computer under the VAIO U moniker — a name that's long belonged to the company's ultra-mobile PC line.

The site has posted what appears to be a print advertisement for the convertible tablet, and it looks like the design has undergone some changes from the prototype we originally saw. The stylus holder has disappeared from the front of the keyboard, the bezel appears to be larger, and the entire system looks quite a bit chunkier. We still think the device would be a good fit for Windows 8, so we'd hope that if Sony is going to bring the tablet to market, it'd be sometime after the release of Microsoft's new, touch-friendly desktop OS. See our gallery below from CES of the Sony Hybrid prototype.

Update: While the VAIO U in the leaked picture shares a similar form factor to the Hybrid prototype we saw at CES, some commenters (thanks!) have correctly pointed out that the design is identical to a device called the "Freestyle Hybrid PC." It was teased alongside the Sony Tablet S1 and S2 (renamed the S and P, respectively) reveal in April of last year, and it was shown off alongside an "Ultimate Mobile PC" that later became the VAIO Z. It's possible this leaked ad is an old mockup, or maybe Sony is prepping the VAIO U for a release on Windows 8. We'll let you know when we hear more. 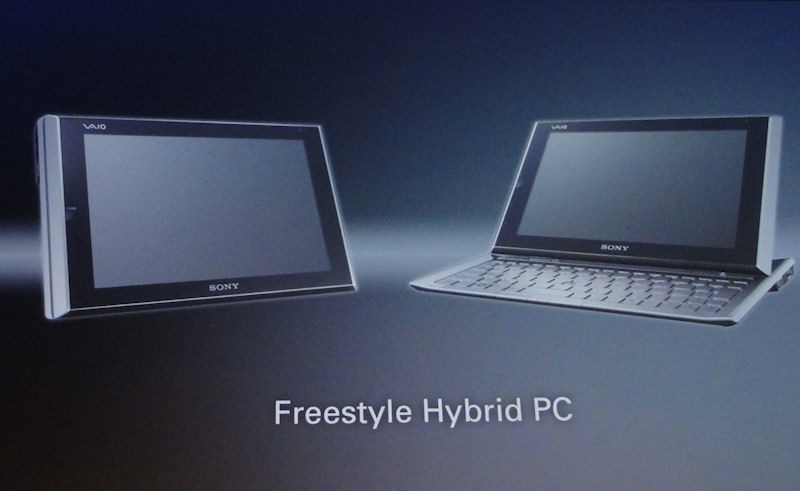