Ultrabooks are Intel's strategy for building a new ecosystem of software, services and ultraportable hardware around its chips. They are the physical embodiment of an effort to bring "more emotional content" to the idea of mobile computing. They're slim and they're sexy. The one thing they're not, however, is cheap.

Acer has been trying hard to change that by selling its entry-level S3 ultrabook at cost and making it publicly known that it's targeting a sub-$500 price point for 2013. Such actions might appear to be the harbinger of a new race to the bottom of the pricing scale, but Intel thinks differently. Today I spoke with Dave Rogers, Intel's marketing manager for Europe, who told me that "how little it will cost is not really the question."

Rogers sees the ultrabook proposition as something much broader than a thin-profile laptop with a modern spec sheet. He spoke of Intel's desire to add value in new ways, pointing to the company's Identity Protection and Anti-Theft technologies on the security front and noting that location-based services are also high on the agenda. In terms of hardware, adding touch — as demonstrated by the touchscreen ultrabook prototype we saw earlier today — will be a priority for Intel, which is now fully convinced that the clamshell form factor is suited to finger-based input. Windows 8's gesture-friendly Metro interface might have something to do with that, but the push to add more capabilities and services is symptomatic of Intel's preference to give people more for their money than to charge them less for the same old thing. 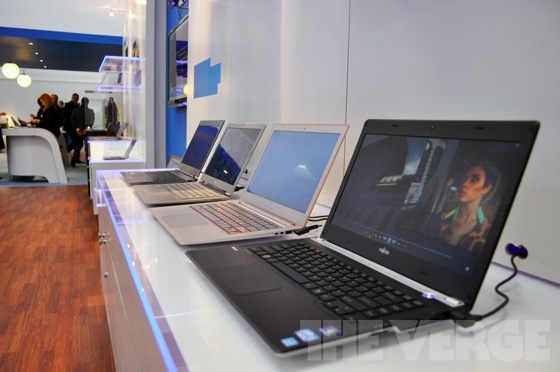 No one should be surprised about Intel's strategy, of course, as the company has always been keen to promote new uses for its processors that keep demand for faster and better CPUs strong. It's pretty much part of the chip giant's DNA. Equally, Acer (and its Taiwanese compatriot Asus) has enjoyed its greatest success when undercutting the rest of the market, which is probably why we're now hearing about it trying to drive prices down. What's becoming rapidly apparent, however, is that Acer and anyone else keen on turning ultrabooks into iPad-rivaling commodities will have to go it alone.

Intel has funnelled a lot of money into helping OEMs like Acer build out their production and supply lines — though it categorically denies that it subsidizes ultrabooks, its investments are directed at manufacturing facilities and component sourcing — but it's done so in order to stimulate a rich hardware ecosystem. Intel seems to have next to zero interest in eroding the price of ultrabooks. As Rogers put it, the challenge with ultrabooks is to convince an industry that is largely "cost- and volume-driven" to embrace a new ethos of rapid innovation, even if it comes at a monetary cost. In Intel's eyes, this new category of laptops will grow to become a central hub to our mobile lives, one whose value and appeal will be measured in what it can do as opposed to how little it'll cost.