Apple has released new updates for GarageBand Priced the same as the previous generation at $4.99, it has support for the Retina Display and some new features as well.

Apple has released new updates for GarageBand to along with the new iPad. Priced the same as the previous generation at $4.99, it has support for the Retina Display and some new features as well. The new features include "Smart Strings" for playing instruments, iCloud support, a note editor, and a cool feature called "Jam Session." Jam Session allows up to four iOS devices to work together over WiFi or Bluetooth to create music in real time. Apple played a brief video demonstrating the feature during its keynote as as you'd expect, it looked like it worked quite well.

True DJs and musicians might be most excited about some of the new sharing features. In addition to iCloud sync, music can be uploaded directly to YouTube or SoundCloud — the latter of which is a killer feature for indie artists.

It's available right now in the iTunes store. Here's what Apple has to say about the new features:

With the new Jam Session feature in GarageBand, you can invite up to three of your friends to get together and wirelessly connect your iOS devices to play and record as a group. Jam Session automatically synchronizes the tempo, key and chords of your Touch Instruments so everyone sounds great. After jamming, everyone’s tracks are automatically collected on your iOS device for you to edit and mix. GarageBand also introduces Smart Strings, a new Touch Instrument that allows you to play an entire string orchestra with just one finger, and the new Note Editor allows you to fine tune a Touch Instrument recording instead of replaying it from scratch. Integration with iCloud keeps your GarageBand songs up to date across your iOS devices, and you can share your finished songs directly to Facebook, YouTube and SoundCloud. 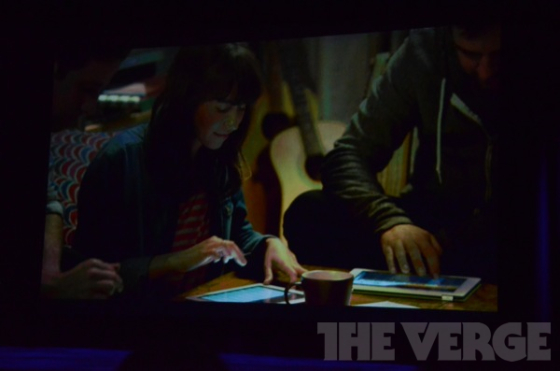