Both Verizon and AT&T are keeping data plan pricing for the new iPad the same as for the iPad 2, despite the new LTE-compatible chips.

One of the headlining features for the new iPad is LTE in the US from Verizon and AT&T, each of whom previously offered 3G data plans for the iPad 2. Fortunately, it seems both carriers aren't going to take this opportunity to gouge excited iPad users for more cash — no-contract data plans for the iPad will stay at the same price for both carriers. AT&T will continue to offer a 250MB plan for $14.99, a 3GB plan for $30, and a 5GB plan for $50. Verizon counts with its standard 2GB for $30, 5GB for $50, and 10GB for $80 plans. Oddly enough, if you visit Apple.com to preorder the new iPad, the site gives a different option for AT&T's data plans — it says that $30 only gets you 2GB of data (see our screenshot below). However, we reached out to AT&T and the company confirmed that its standard tablet data rates will apply to the new iPad. 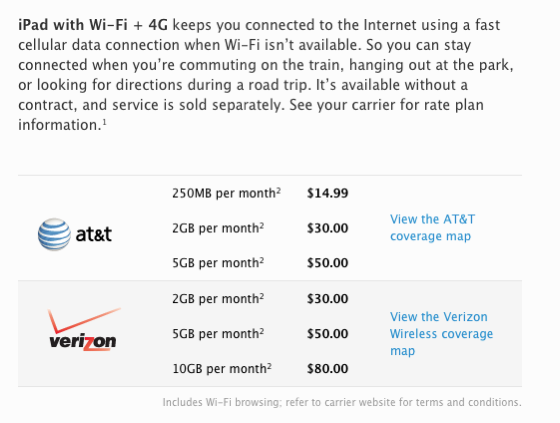 Update: Since last night, Apple.com has been updated to reflect the mistake — $30 will in fact get you 3GB, not 2GB as the site previously stated (see the image below). However, along with that change, Verizon's data plans have also changed. There's now a 1GB plan for $20 (same as the carrier offered when the iPad 2 launched last year), plus the 2GB and 5GB plans for $30 and $50, respectively. Strangely enough, Verizon's own webpage does not show a 1GB plan for $20 for any of its tablets, and we've heard from some readers that the 1GB plan has stuck around even though it doesn't appear on Verizon's website. We have reached out to Verizon to try and get the official word on what data plans will be available for the new iPad and will update here as soon as we hear anything. 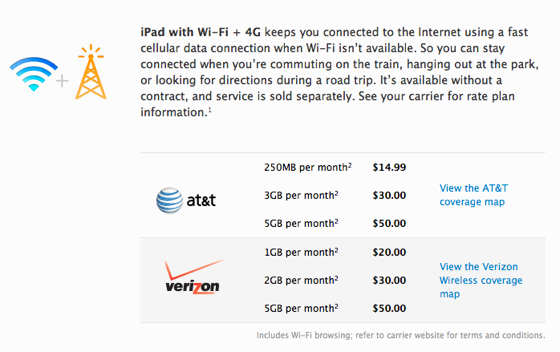 Update 2: We've gotten the official word from Verizon — apparently, both of the above screenshots have the correct information. Even though a 1GB plan isn't listed on its site, Verizon will still sell 1GB of data for $20. For the full details on Verizon's LTE pricing for the new iPad, check out this post.