New iPad LTE: should you buy Verizon or AT&T?

New iPad LTE: should you buy Verizon or AT&T?

Ask yourself a few basic questions to determine whether the AT&T version or the Verizon version of the new iPad with LTE support is right for you.

In the US, buyers of the LTE-enabled version of the new iPad are faced with a very important question: should they pick up Verizon's version or AT&T's? Both networks offer high-speed LTE service, but beyond that, these are two very different networks — and just because you're using a particular carrier's network for your phone doesn't mean you should follow suit for your iPad, particularly since you can activate contract-free, month-to-month service right on the iPad itself.

At $629 to $829, an LTE iPad is going to leave a hole in your wallet and there's a very good chance it's going to stay with you for a long time to come, so let's take a look at some key questions you should ask yourself before making the call.

Do you need mobile hotspot capability?

If you want to be able to connect other devices — laptops and the like — to your iPad over Wi-Fi to establish an internet connection, the choice is simple: Verizon. AT&T doesn't offer the capability yet, though it says it's working with Apple to enable it "in the future."

Do you spend almost all of your time in a city with AT&T LTE?

AT&T's LTE deployment is quite a bit newer than Verizon's, and as such, it's less saturated — there are physically fewer users on it day in and day out. In practice, that means that AT&T's LTE service can be considerably faster in some situations, a phenomenon we've observed ourselves. This won't be true forever — particularly as new iPads and iPhone 5s invade both networks — but in the short term, it's a notable difference.

Do you travel a lot between cities in the United States?

Both LTE-enabled iPad models support international roaming, so that's not an issue — but domestically, there are some other things to consider. If you're spending a lot of time on the road and you usually find yourself in a metropolitan area, odds are higher that you'll be covered by Verizon's LTE network than by AT&T's: Verizon covers around 200 markets and over 200 million Americans with 4G, while AT&T covers roughly 74 million in some 28 markets.

Do you travel a lot in rural areas?

The entirety of Verizon's network is EV-DO or better, which means you'll get at least 3G speeds — the company's latest stats put that coverage at over 210 million people. AT&T, meanwhile, continues to build out its HSPA+ network, but there are still large swaths of rural footprint that fall all the way back to 2G — virtually useless on an iPad for anything other than checking email (slowly).

Take a look at a direct comparison of AT&T's coverage map and Verizon's, which you can access by hovering over the image (LTE areas are indicated by the small, colored dots). Verizon's map has just a single shade of blue because it's operating at a single 3G speed across the board; AT&T, meanwhile, has two speeds of 3G (medium and dark blue) along with a much larger 2G footprint, shown in light blue. 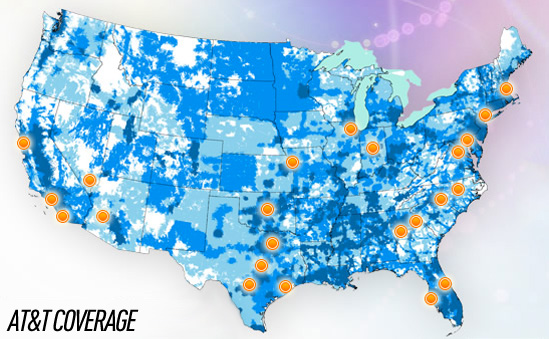 Do you spend most of your time in an area with no LTE service at all?

These pockets of the country are getting smaller literally by the week, but there are still millions of Americans who are covered by Verizon's 3G service and AT&T's HSPA / HSPA+ service — and no LTE whatsoever. If you're in such an area, the very first thing you should do is call both carriers (or visit their stores) to inquire whether an LTE rollout is expected soon; if so, you should simply choose whichever carrier is getting the service first.

If you won't have access to LTE anytime soon, though, AT&T is likely the better choice: its HSPA+ deployment is capable of taking advantage of the 21Mbps modem in the new iPad. You'll never see anything close to that in real-world use, of course — but it's possible to see bursts as high as 10Mbps in the best cases, whereas Verizon's aging EV-DO Rev. A network tops out somewhere between 2 and 3Mbps.

In densely-populated urban areas, AT&T's data network has a higher chance of grinding to a halt than Verizon's in our experience, but make no mistake: both can become very slow with the right mix of users, geography, and time of day.

These are the general guidelines we'll be using to make our own buying decisions this week, but ultimately, both of these networks have "personality" — their performance varies widely from market to market, and what works for us may not work for you. Keep in mind that any iPad you buy from Apple is covered by a 14-day return policy with no restocking fee. If you buy the AT&T model and it's too slow, you buy the Verizon model and it's not connecting to LTE, or you just get the vague sense you might be better suited with the other network, don't hesitate to swap it within that two-week period.

More from this stream The new iPad: everything you need to know