Hands-on impressions for iA Writer for iPhone, a text editor that previously came to iPad and Mac.

iA Writer for iPad, Mac, and now iPhone is a minimalist text editor that has turned design agency Information Architects into a full-blown app developer. Like WriteRoom, PlainText, and other similar text editors, its main feature is an absence of features, designed to remove distractions and aid focus on the task in hand. Writer offers a few twists, though — a modified iOS keyboard, seamless iCloud and Dropbox syncing, and a single, beautiful monospaced font (a modified version of Nitti Light) in a non-adjustable point. It makes for a great writing experience, and I can tell you personally that almost all my posts on this site start out as a blank full screen on Writer for Mac or iPad. An update adding iPhone support to the latter version is rolling out in the App Store across the world right now, and I've been using it for a few weeks. 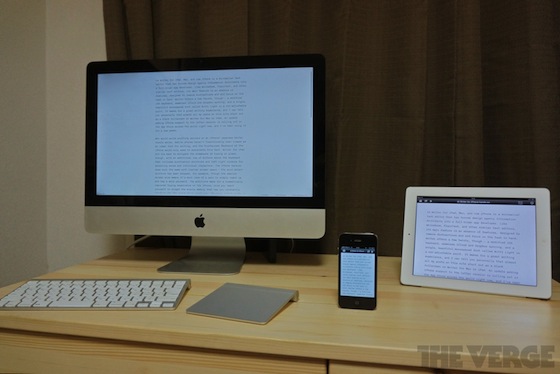 Who would write anything serious on an iPhone? Japanese keitai novels aside, mobile phones haven't traditionally been viewed as an ideal tool for writing, and the touchscreen keyboard of the iPhone would only seem to exacerbate this fact. Writer for iPad did its best to mitigate the drawbacks of typing on glass, though, with an additional row of buttons above the keyboard that includes punctuation shortcuts and left-right cursors for selecting words and individual characters. The iPhone version does much the same with limited screen space — the word select function has been dropped, for example, though the smaller screen size means it's much less of a pain to simply reach up and tap a word yourself. The additions make for a dramatically improved typing experience on the iPhone, once you teach yourself to forget the muscle memory that has you constantly reaching for the punctuation panel key. The keys aren't quite as responsive as the standard iPhone keyboard, however, and sometimes lagged around half a second on my iPhone 4. It's not a huge problem, as the taps were almost always registered.

One notable omission from the iPhone version is the much-vaunted Focus mode, which fades out lines you've already written so that you can concentrate on the current sentence. I personally never really used this on other versions of the app because I like to think about the structure of an article as I'm writing, and since the iPhone version of Writer can only display around eight (short) lines of text at a time anyway the Focus mode would be somewhat redundant. The constantly displayed word count on Mac and iPad has also been left out on iPhone, however, and I feel that's a strike against it as a longform writing tool — the limited view means it's difficult for me to get a feel for exactly how much I’m writing. As I type this sentence, about all I can tell you about the structure of the post is that I’m coming to the end of the third paragraph. 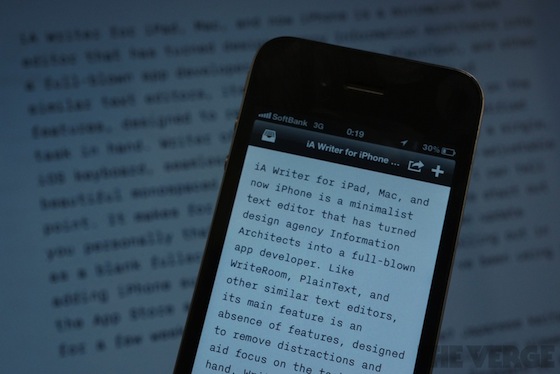 Where it really shines, however, is in its implementation of syncing — specifically iCloud. You can choose to save your documents as regular files to Dropbox or your phone's storage, but the smoother option is to dispense with the file system altogether and start off in iCloud. This way, documents are automatically saved to the cloud and update across devices almost instantly, though not quite iMessage-fast. Another slight caveat is that documents started on Mac need to be saved locally before being manually moved to the cloud, though after doing so they act as if they were started on iOS. There's a simple file system hack you can use to get around this, but it looks like only Apple has access to fully automatic iCloud syncing at the system level right now, which may well be a targeted area of improvement for Mountain Lion. Overall though, syncing is very well implemented, and makes Writer for iPhone a lot more potentially useful than it otherwise would be.

Obviously, Writer for iPhone is unlikely to become many people's primary writing software. However, it is about as good a writing tool as you could hope for from the iPhone, and the syncing functionality makes it a useful part of the workflow for anyone using Writer on other platforms — I've frequently found myself using the app to edit, review, and add a few sentences on the go, and the simple design also makes it the perfect note-taking app for me. While you'll likely find yourself using it in very different ways, iPhone functionality is a great addition to what was already a great iPad app. At $0.99, I can comfortably recommend it to anyone who ever writes anything longer than a phone number.