How I stopped worrying and learned to love Fuel

It’s around 8 o’clock in the evening on the Paramount Studios backlot, and I’m standing at the edge of the high-fall tower, eyeing the ground down below. The stunt coordinator to my right tells me to go ahead and jump, and just aim for the “X”. I’m no fan of heights, but against my better judgement I leap anyway. After landing safely in the waiting airbag, I roll out and check the black bracelet strapped around my wrist. I just hit 350 NikeFuel points for the night.

The last few years have seen a steady stream of fitness monitoring products come to market. With the Fitbit, Jawbone’s Up, the MotoACTV, and the original BodyBugg all jockeying for position, it’s a crowded field with a simple message: monitor your physical activity — or lack thereof — and you’ll know exactly what to improve upon in order to become a healthier, happier you. Nike’s been a leader in the area since the introduction of the Nike+ iPod Sports Kit back in 2006, and has been offering runners ways to track their workouts ever since.

The company recently debuted its latest entrant into the personal fitness field, the Nike+ FuelBand. It’s a sleek wristband that uses a tri-axis accelerometer to keep track of the steps you’re taking, the calories you’re burning, and most importantly, how much NikeFuel you’re accumulating. A wholly new metric that Nike claims can measure all of your daily physical activities, Fuel is the core element of the new wristband, and will soon be a key feature across Nike’s entire product line. How does the FuelBand fare, and does Fuel really provide benefits the competition can’t? Read on to find out.


On the outside, the FuelBand is as spartan as they come. A black, rubbery sheath covers its metal frame, with a lone button and a silver clasp serving as the only adornments. The spring-loaded clasp is surprisingly sturdy, providing a quick and easy release, but never popping off on its own. Placed along the top of the band, the button is slightly raised and requires just enough pressure to prevent accidental triggers — all the better for sweaty hands while running or jogging. A matrix of 100 white LEDs nestled beneath the exterior serve up your current calorie, step, and Fuel totals, as well as the time of day. A strip of colored LEDs indicate how far along you are towards your daily Fuel goal. The display definitely looks its futuristic best in low-light situations, but an ambient light sensor dynamically tweaks the brightness so it's easy to read even in direct sunlight.

The FuelBand is sold in three sizes, and with each model also including two swappable sizing links, it should be able to fit arms of all types. It feels quite solid on the wrist, more like a good watch than a gadget, and a far cry from the frustrating flimsiness of Jawbone’s Up. Weighing in between 0.95 and 1.13 ounces depending on size, it hits that aspired-to sweet spot: heavy enough to feel like you’ve wearing something of quality, but light enough to disappear when you’re going about your daily routine. Some of that solid feel may also stem from the twin lithium-polymer batteries that line the inside of the bracelet; Nike says the FuelBand should be good for four days on a charge, but I was able to push it for a full five before receiving my first low-battery warning.

The FuelBand’s rubberized exterior is resilient for most activities, but after a couple days of use I did manage to ding up the underside, which was disappointing for a device whose clean look provides much of its aesthetic appeal. The band is water-resistant, and I experienced no problems taking a shower with it, but waterproof it’s not — if you’re a swimmer, you might still want to look at something like the Garmin Forerunner 310XT.

The key element to any fitness tracking device, of course, is how well it actually monitors your activities, and as a simple step counter the FuelBand performs admirably well. I ran several tests on different types of terrain, and the device’s tally strayed from the actual step count by an average of just three percent. I then matched its calorie-counting prowess against the Nike+ GPS iPhone app while jogging, and while the results didn’t track as closely as I was expecting — the FuelBand reported less calories burned than the app — it was certainly within what I’d consider a reasonable margin of error, and was internally consistent from run to run. 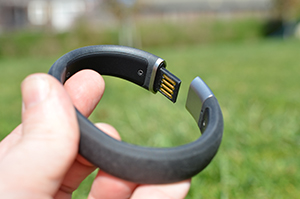 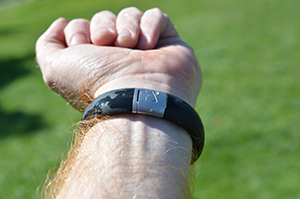 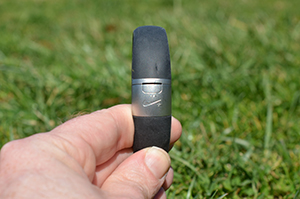 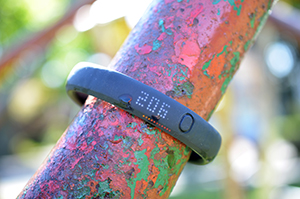 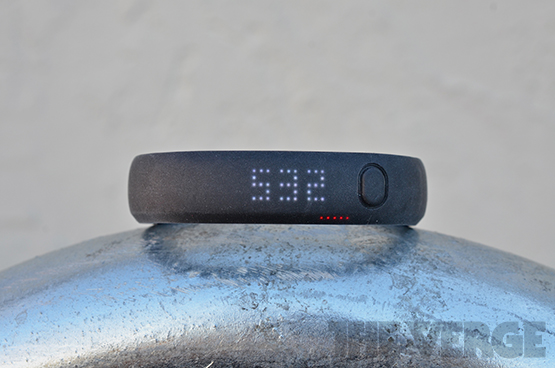 The FuelBand’s main attraction is its namesake unit of measurement. Nike’s positioning Fuel as a sort of "one metric to rule them all" that can be compared across individuals because it quantifies the activities you perform, not the energy you expend. According to the company, two people walking a mile at the same pace should each earn the same amount of Fuel, even if one’s an Olympic athlete and the other’s a tech journalist. Fuel’s origins are in something called oxygen kinetics, which essentially measures the oxygen uptake the human body needs to accomplish a given task. Nike’s cataloged that data for various activities, run it through its proprietary algorithms, and come up with the Fuel point system. The company claims an average person will earn 2,000 Fuel points in an ordinary day, while an active day should get you up to 3,000. A day filled with sports and other physical activities should net 5,000 NikeFuel points or more.

Calculating Fuel is also where the FuelBand gets to strut its stuff. The accelerometer detects motion on three different axes, allowing it to monitor your movements in three-dimensional space. The band is then able to recognize the core, repetitive patterns of motion that make up various activities — going for a jog, or playing basketball, for example — and after adjusting for duration and intensity, it awards you the amount of Fuel your activity warrants.

If it seems like a bit of a black box, that’s because it is — but NikeFuel scores do seem to be consistent with one another. The night at the Paramount Studios lot, Nike ran a group of 40 of us through the paces with obstacle courses, fight choreography, and the aforementioned high-falls. Over the course of 90 minutes we all gained between 1,500 to 2,000 Fuel points each. Later in the week, I wore the FuelBand while moving out of my apartment, and three hours of running up and down the stairs while lifting boxes netted 3,705 in Fuel.

However, the fact that the device keys off arm motion does lead to some activities being rewarded more heavily than others. 10 jumping jacks will get you 10 Fuel points, but 10 tough minutes on an elliptical — with consistent, steady hand motion — produced just 150 Fuel points. Riding a stationary bike, with hands locked to the steering grips, resulted in no Fuel earned whatsoever. Nike admits that the FuelBand also doesn’t play nice with resistance-based activities like yoga or weight lifting, but to be fair this type of variance is going to be an issue with any wrist-mounted device. While Nike will be releasing a new line of Fuel-enabled basketball and training shoes this June, there's no indication that they'll be able to work in tandem with the FuelBand for a more complete solution.

And before you ask, yes, I tried shaking my hand up and down to try to win free Fuel. Whether the FuelBand is designed to prevent such shenanigans or not isn't clear, but the two measly points I earned were definitely not worth the effort.


One big advantage the FuelBand has over some of its competitors is its ability to provide live, immediate feedback on your progress through the LED display. Where these types of products really shine, however, is in tracking your results over a longer period. For the FuelBand, that comes via an app for your iPhone or iPod Touch — an Android version is coming this summer — or through Nike’s website. The FuelBand syncs with the mobile app wirelessly via Bluetooth, or you can slot its built-in USB plug directly into your computer for syncing and charging (a dock is also included for convenience). The app and website provide primarily the same functionality, tracking the amount of Fuel you’ve gained over the course of the day, week, month, or year. There’s also an awards and achievements system built in, which is where some of the more game-oriented aspects come into play.

Every day, you start with the goal of accumulating a pre-determined amount of Fuel. When first setting up the device, you’re provided with choices based upon normal, active, or very active lifestyles, and you can then adjust your goals as needed on a day-by-day basis. Achievements are given for meeting your Fuel goal, and additional awards are doled out for besting it by various multipliers, setting streaks, or hitting overall Fuel thresholds. The awards show up as Xbox Live-style badges, accompanied by animation sequences of the lively NikeFuel mascot. The rewards sequences are actually pretty insane — there’s a lot of glowing lights and glittery explosions — but after the first few times they started to feel stale, and I found my focus shifting towards beating the goal I’d set for myself rather than getting a digital stamp of approval.

While all the basics are covered, it does feel like Nike could flesh things out further on the software side. From a motivational perspective, social integration with other FuelBand users is simply a must. You can currently post your achievements to Facebook and Twitter, but it’s not as if posting the "Smooth" trophy is going to elicit a response from friends that don’t own FuelBands themselves. Additionally, the Fuel section of Nike’s website is completely siloed off from the Nike+ running portal, which means none of your friends or running history can be integrated with your Fuel data. Fortunately, Nike is already working on a complete Fuel-centric overhaul of the Nike+ website. It’s scheduled to launch by the summer, and will even feature the ability to calculate Fuel totals using the GPS and run data from the company’s current line of Nike+ products. 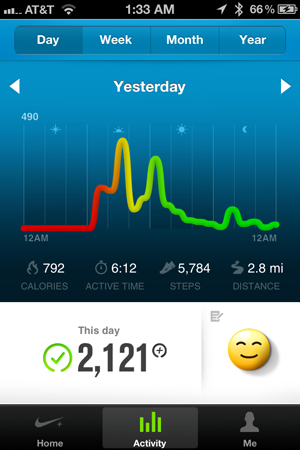 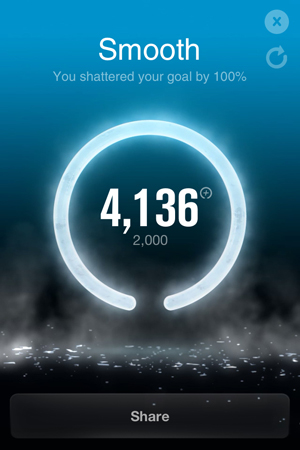 Our review of Nike+ FuelBand 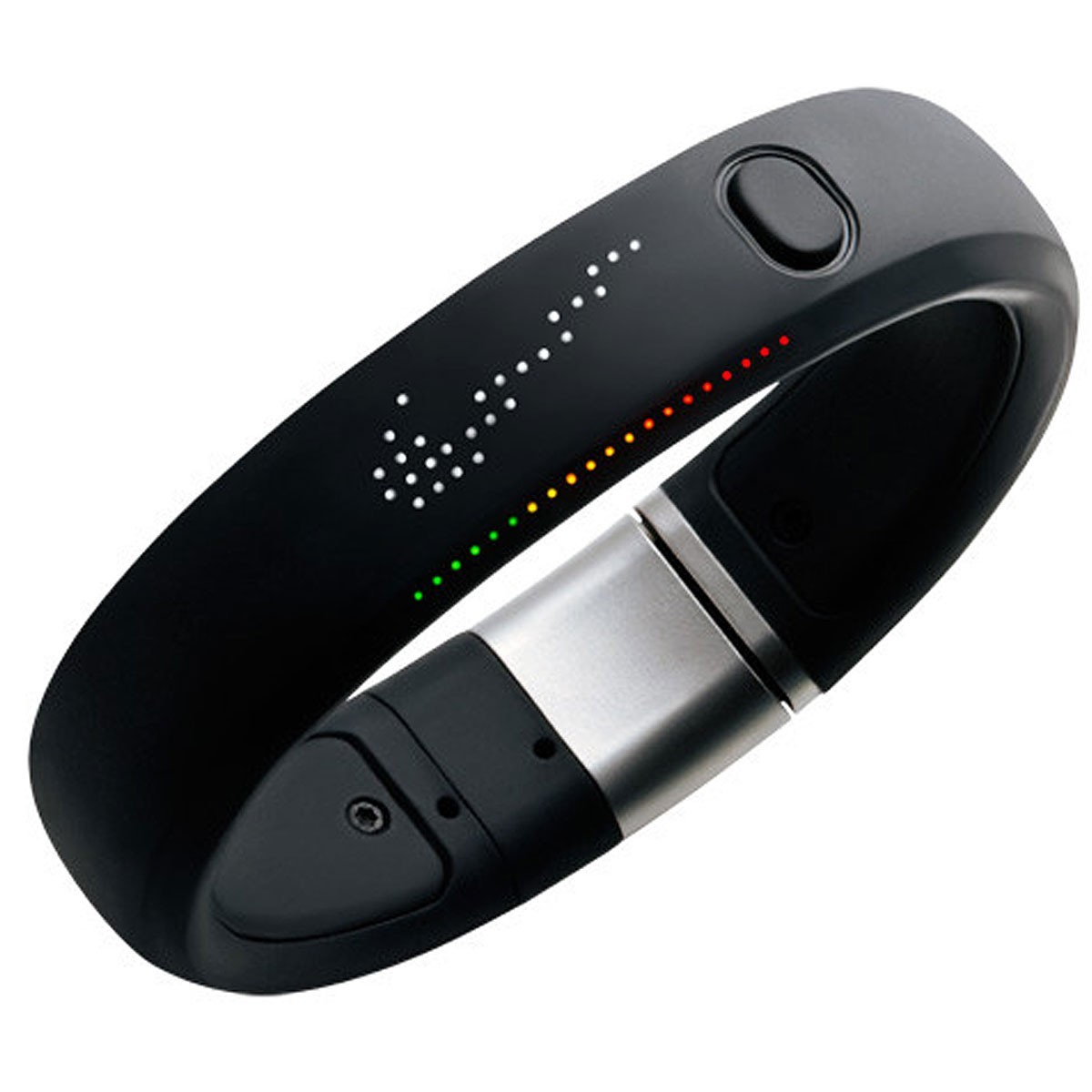 The FuelBand is a fitness device for the rest of us

Measuring your physical activity with a new magic metric is the athletic equivalent of talking in your own made-up language. What’s fascinating about the FuelBand, however, is how deceptively fun it makes exercise. By decoupling physicality from any currently accepted empirical standard, the only baseline becomes your own performance, or that of your family and friends. The system also takes some phrases that are quite tainted for many people — words like calorie, or carb — and removes them from the picture entirely (striking the calories menu from the FuelBand entirely is just a checkbox away).

What you’re left with is a product that’s probably not that interesting for hard-core athletes or the exercise-obsessed, no matter how many times LeBron James appears in the commercial. Instead, the FuelBand is a device designed to simply make the idea of exercise and physical activity fun and rewarding. In that it excels, and if that should lead to customers falling in love with the Fuel concept and buying more Nike products as a result... well, there’s a reason the word “ecosystem” comes up when representatives talk about the device.

That said, that narrow focus comes with drawbacks. The FuelBand doesn’t monitor your sleeping patterns or serve as an alarm, two of the cooler functions of the Up bracelet, and it doesn’t provide GPS functionality like a full-featured sports watch. At $149, there are also quite a few cheaper options out there on the market. But if you’re looking for a stylish way to turn being active into something fun rather than something to dread, the Nike+ FuelBand might be just the ticket.

Michael Shane contributed to this review.