Facebook revealed in an updated SEC filing that 432 million people use the company's mobile app. 58 million of those people never use Facebook's website.

In an updated filing with the SEC yesterday, Facebook revealed that in December 2011, 432 million people accessed the social network from a mobile device — a 76 percent increase since December 2010. Facebook in part attributes the increase to the launch of its iPad app and its purchase of Snaptu, a company that helped Facebook deliver its mobile site to over 2,500 feature phones and other devices, in April 2011.

58 million of these 432 million people never even touch Facebook's website, a big missed opportunity in terms of ad impressions since the mobile site doesn't display ads. With new mobile news feed ads launching soon, Facebook could capitalize on the huge amounts of traffic its mobile app and mobile website receive each month. Here are three charts from the SEC filing that illustrate Facebook growth in terms of three month periods since 2009: 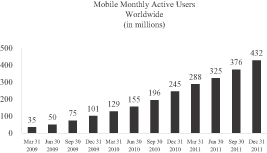 While mobile usage is clearly on a roll — Nielsen's "Q3 2011" report confirmed that Facebook's mobile app gets the most monthly engagement of any app on iOS or Android — Facebook's daily user growth worldwide appears to be slowing as the social network achieves higher market saturation.