Want to keep track of all your favorite celebrities, pages, or even Verge writers? Facebook just announced Interest Lists, a new way to create customized news feeds filled with stories from people and pages you're subscribed to. Interest Lists can also include people you're friends with, but Facebook recommends creating some lists surrounding topics you enjoy. Facebook has already built Interest Lists you can follow like "Art Critics," "Fiction Authors," and "Movie Stars."

So what's the difference between a like and a subscription? Ads.

At Facebook's Marketing Conference two weeks ago, the company told us that if you like a page on Facebook, that page (or brand) can serve ads to you. Facebook told us today that if you add a page to one of your Interest Lists, this does not mean that Page can serve ads to you. When you add a page to an Interest list, you subscribe to that page but do not like the page, hence you cannot be served ads from that page. For example, if you add Coca Cola's Facebook Page to your "Beverages I Enjoy" Interest List, Coca Cola will not be able to serve you ads.

Interest Lists are available to check out now inside Facebook's left navigational bar. Here's how an Interest List looks: 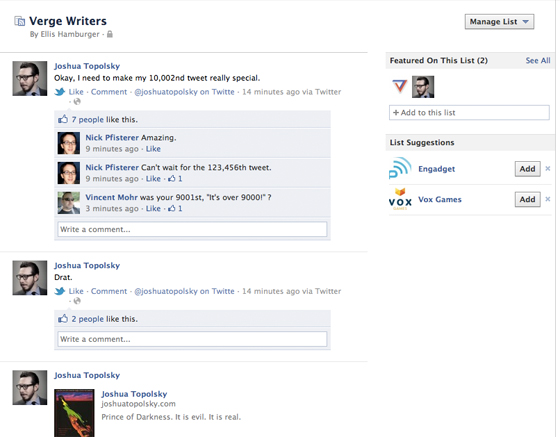