The newest update to Google's Chrome OS is bringing the browser-based operating system a lot closer to a traditional windowing environment. Development channel (the least stable build) version 19.0.1048.17 adds Google's hardware-accelerated Aura UI and window manager, bringing a desktop, overlapping windows (pictured above), a Windows-style taskbar, and a Launchpad-esque app launcher (pictured below) to the platform.

According to the project's wiki, the goal of Aura is to use hardware acceleration to achieve more computationally intensive tasks like large-scale animated transitions and effects as well as to provide the basis for a flexible windowing system. Aside from Aura, other new features in the latest dev channel release include support for new file types (tar, gz, and bzip2), updates to the local audio and video player, and new modes for multiple monitor handling. Unfortunately, early-adopting Cr-48 owners are out of luck — the build of Chrome OS in question is only for Acer AC700 and Samsung Series 5 Chromebooks. 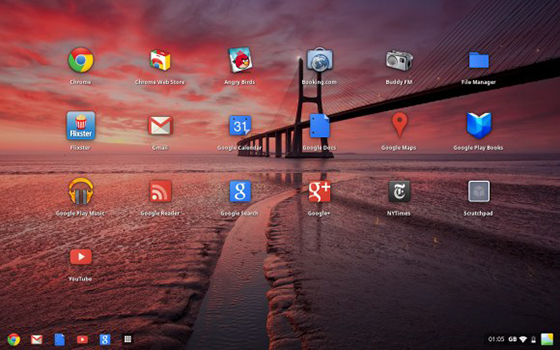