With new software and a new price, can Samsung's tablets compete?

Today we're looking at the Galaxy Tab 2 7.0, the 7-inch model that has nearly halved its price, and now costs a very reasonable $249.99. Rather than compete with the iPad, it's up against the BlackBerry PlayBook, Kindle Fire, and Nook Tablets of the world. Galaxy Tabs had a tough time measuring up to the iPad and Transformer Prime, but can they keep up with their new competitors? Let's find out.

If you've seen one 7-inch Galaxy Tab, you've seen them all — Samsung doesn't seem to be interested in overhauling its tablets' designs. That's not a bad thing at all, though: the Galaxy Tab 2 is a sleek, attractive device, albeit not a particularly flashy one. The tablet's back is a matte grey plastic, and it's both comfortable to hold and mercifully resistant to fingerprints. As far as buttons and ports, it's laid out exactly like the Galaxy Tab 7.7. There's an IR blaster on the right side as you hold the tablet vertically, below the volume rocker and power button — those two are grouped close enough together that I continually pressed the wrong one when I wasn't looking at them. A microSD card slot sits on the left side, letting you add up to 32GB of storage in addition to the 8GB that comes built in. Up top you'll find the headphone jack, and on the bottom two stereo speakers flank Samsung's standard proprietary dock connector. It's a good design, and Samsung was smart not to change it much.

The two speakers are decent, but there's not much in the way of a stereo effect — their output just sounds like one louder-than-average speaker. They're pretty clear, and have decent dynamic range as you listen to music or watch a movie, but be careful about how you hold the tablet: if you hold it horizontally, your hands will likely cover the speakers, and if you hold it vertically in your lap or on a table the sound gets seriously muffled as well.

With the Tab 2 replacing the Tab 7.0 Plus, I can't help but think of the Tab 2 and the Tab 7.7 as the same product, one with a cellular connection and one without. There's really only one difference in hardware between the two models, and unfortunately it's a big one: the display. 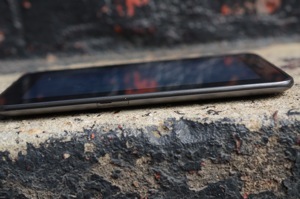 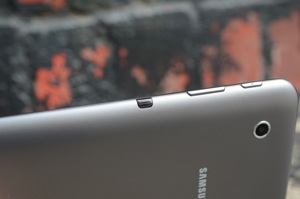 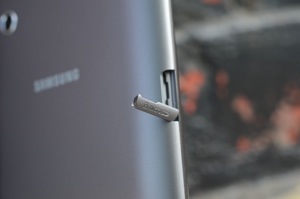 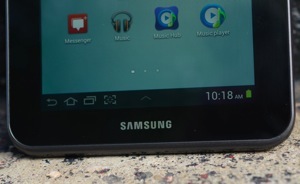 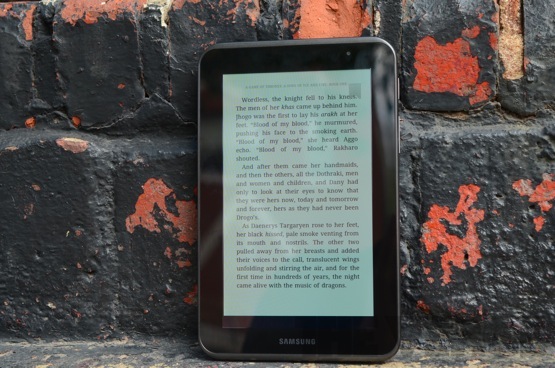 The Tab 2's 7-inch, 1024 x 600 TFT display is good, but it's no match for the 7.7's gorgeous 1280 x 800 Super AMOLED Plus display. I used the two side-by-side quite a bit, and the differences are stark: the AMOLED screen is so high-contrast that whites look pearly and blacks look like total darkness; the Tab 2's display gives whites the slightest yellowish tint, and blacks are just a bit grey. It's not an effect you'd notice until seeing the two displays next to each other, but it's also hard to un-see once you've used the 7.7.

As with the 7.0 Plus, the Tab 2's screen is bright and has good viewing angles, and is quite responsive. It's also astoudingly prone to glare and fingerprints, text has some jagged edges, and small text is pretty much unreadable. It's basically a market-average display, certainly no worse than most tablets, but now that my eyes have seen the iPad's Retina display and the 7.7's AMOLED, it's a little hard to get excited about the Tab 2's screen. 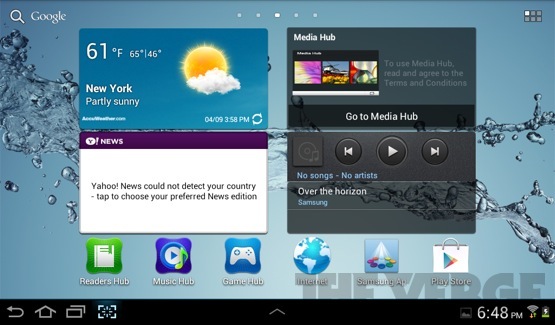 Much though I prefer the 7.7's display, if I were deciding between the two Galaxy Tabs today I'd buy the Tab 2 7.0 in a heartbeat. Why? It runs Android 4.0, and the jump from Honeycomb to Ice Cream Sandwich makes a world of difference. The lag and stutter you can't help but notice in Honeycomb are virtually non-existent on the Tab 2 7.0, and the whole experience of using the OS is much more pleasant. Scrolling is much improved (though still not totally seamless), and opening and closing apps is a much more reliable and quick experience. It's not perfect — rotating the screen still takes too long, and swiping between home screens can still stutter a bit — but it's oh so much better.

A number of core apps are improved in the new OS as well. The browser pinches and zooms better, and renders sites much more accurately; the Gmail app is prettier and more intuitive; even the on-screen keyboard is better. Ice Cream Sandwich finally makes Android feel like a mature tablet operating system.

On top of it all is a layer of Samsung's TouchWiz UI skin, which is aesthetically very similar from Honeycomb to Ice Cream Sandwich. Many of the changes Samsung makes aren't as necessary with Android 4.0 as with the previous version, but many are still useful — the expanded quick-access settings menu is excellent, and I quite like the mini apps that you can pop up from the bottom panel to take a note or check your email without leaving an app. The keyboard is well-tweaked too, with a persistent row of number keys helpfully added above the keyboard. I don't care for the many widgets Samsung adds to home screens, but those are easily removed. 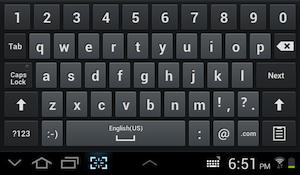 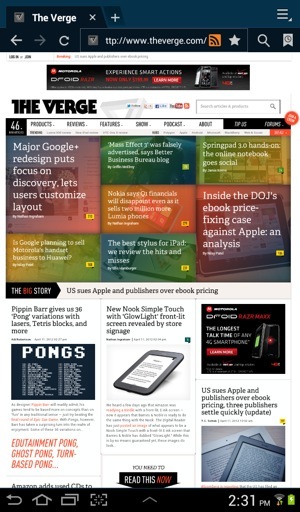 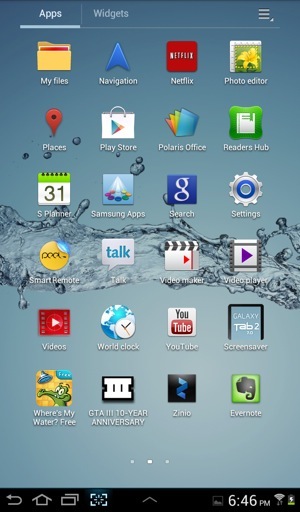 Ice Cream Sandwich may have improved the core Android tablet experience, but it doesn't solve the OS's biggest problem: the glaring lack of good, tablet-optimized apps for Android. The number of tablet-friendly apps is certainly increasing, but it's still far too low, and most of the apps you download will still be blown-up phone apps. Mileage varies with those: some games look okay stretched to the larger resolution, but oftentimes you'll end up with awkwardly long menu lists, unused space, and even barring that most apps just feel like they're not taking advantage of all the screen real estate.

Samsung preloads a handful of apps onto the device, from the standard Samsung-made set of Media Hub, Game Hub, AllShare, and ChatON to third-party apps like Amazon Kindle, Dropbox, Evernote, and Grand Theft Auto. I actually would have downloaded most of the third-party apps anyway, so I don't mind the bloatware as much as I normally do, but that's just me. Most can be uninstalled, but one you should definitely use is Dropbox: you'll get 50GB of free Dropbox storage for a year when you first log in to the app on your Tab 2. 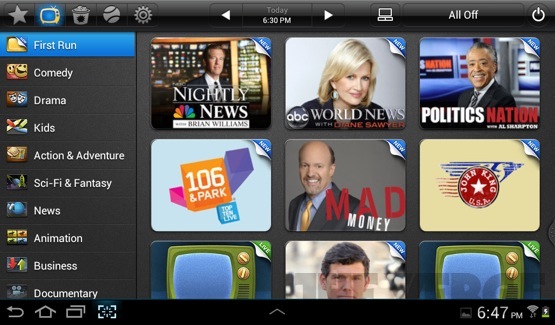 The best preinstalled app is Peel, which works with the Tab 2's IR blaster to turn your tablet into a universal remote of sorts — we've seen the same implementation on the 7.0 Plus and the 7.7. Peel is great software, a visual TV guide that can also control just about everything in your home theater stack. It's particularly good-looking, but it works well with the Tab 2, adapting nicely to the larger screen and quickly setting up and controlling your TV. It even figured out how to control the OTA channels I get on my cable-less setup at home, and using Peel was infinitely better that wading through a dozen public access channels to find something to watch. Given that your tablet's likely home is your couch anyway, this kind of use is a nice addition to the equation. 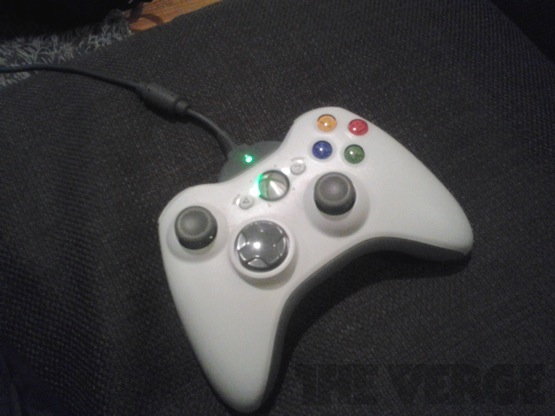 Tablet cameras are typically a dime a dozen, all virtually identical in specs and performance, but the Tab 2 is decidedly worse than most of its competition. There's no autofocus on either the 3-megapixel rear shooter or the VGA front-facing lens, which mean you can't shoot anything closer than about four feet or you'll get extremely blurry and unfocused photos. Even in-focus shots are soft and noisy, and only absolutely ideal lighting produced usable photos. 720p video is similarly poor quality, noisy and dark even in decent lighting.

Camera quality was clearly one of the things Samsung sacrificed to produce a $249 tablet, and personally, I'm totally fine with that. Hell, Samsung could've removed the cameras altogether, charged me even less, and though I'd miss some fun augmented reality apps I'd certainly make that tradeoff. 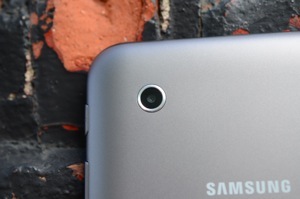 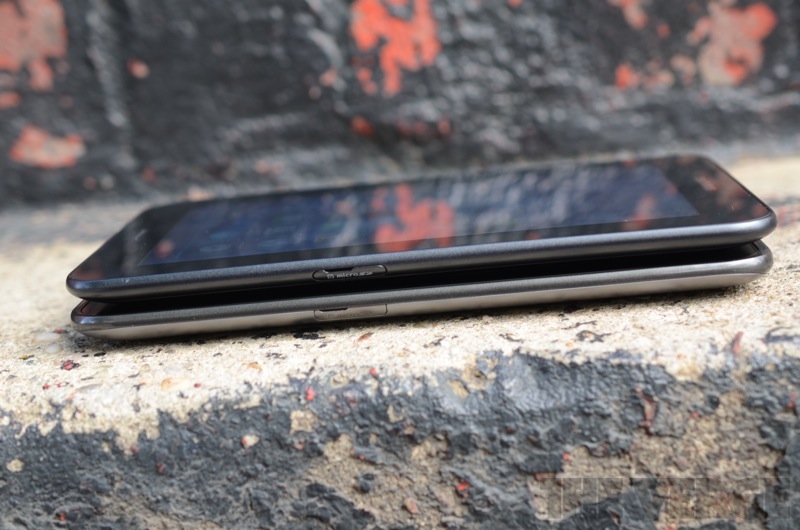 The Galaxy Tab 2 7.0 is powered by a 1GHz dual-core TI processor, and it's definitely up to the task of keeping everything running properly. There are few stutters or lags — many of the issues we'd seen on other tablets seemed to be software-induced anyway, so the lack of a spec bump matters less than the OS upgrade — and for the most part everything happens really smoothly. Grand Theft Auto III, my go-to app for testing a device's power, ran without a hitch.

The only significant performance issue I had was with sound: occasionally, the Tab 2 would mute its sound for no reason, and I had to go back to the home screen before the volume rocker would even activate again. It's a strange quirk, and only happened a few times, but it's really annoying.

The 4,000mAh battery inside the Tab 2 is a little smaller than the 5100mAh of juice you'll get from the 7.7, but since there's no LTE connection on the Tab 2, it doesn't need quite as much power. With regular use, you'll certainly measure the Tab 2's battery life in days rather than hours — I used it extensively for two days before needing to charge the device. Wi-Fi devices in general last a lot longer than those with a cellular connection, and the Tab 2 7.0 is no exception.

Our review of Samsung Galaxy Tab 2 7.0 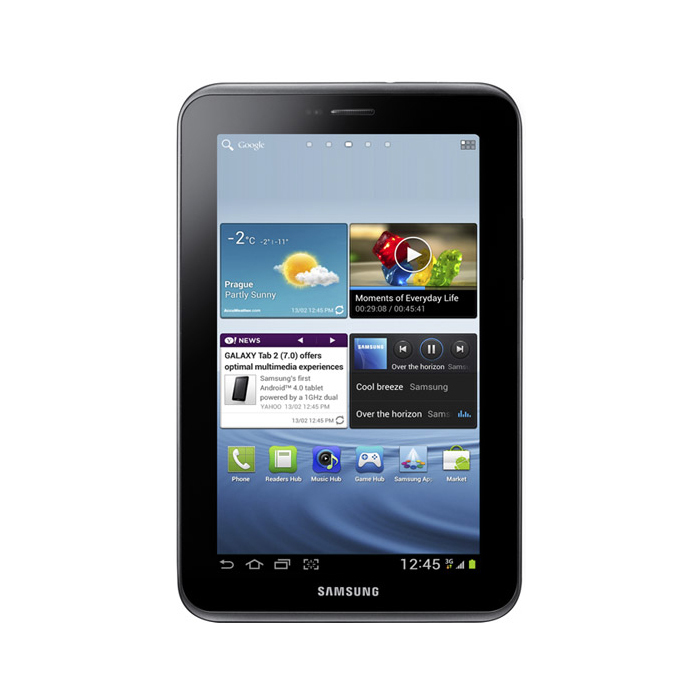 Samsung can't beat the iPad, but it's not trying to anymore

It took Samsung a while, but the company seems to have finally figured out the secret to a successful tablet: don't compete with the iPad. The Galaxy Tab 2 7.0 competes instead with the Kindle Fire and the Nook Tablet, and unless you're a heavy reader or love the particular interfaces of those two tablets, the Tab 2 is probably a better buy right now. Ice Cream Sandwich is an excellent tablet operating system, and though it hasn't solved the app problem — though the Kindle Fire and Nook Tablet are in the same boat — phone apps do look a little better on a 7-inch display than blown up to 10 inches. The Tab 2 is more powerful than either the Kindle Fire or the Nook Tablet, and because it runs a fuller version of Android it's a more capable device if you're interested in more than just reading. If Samsung would add the Galaxy Tab 7.7's Super AMOLED Plus display, this would be an absolutely killer tablet, but even as is it's as good a slate as you'll find for $250.

Compare the Galaxy Tab 2 7.0 to its competition right here