Widescreen monitors become the most used on the internet

The latest release from Statcounter show that the widescreen 1366 x 768 monitor resolution has overtaken the 4:3 1024 x 768 for the first time.

Share All sharing options for: Widescreen monitors become the most used on the internet

The latest stats by internet monitor StatCounter have revealed that a widescreen 16:9 resolution is now the most commonly used to browse the internet for the first time. The company's research shows that by the end of March this year, 1366 x 768 monitors had become the most used on the web, just overtaking the 4:3 1024 x 768 resolution that held more than 40 percent of the market just two years ago. 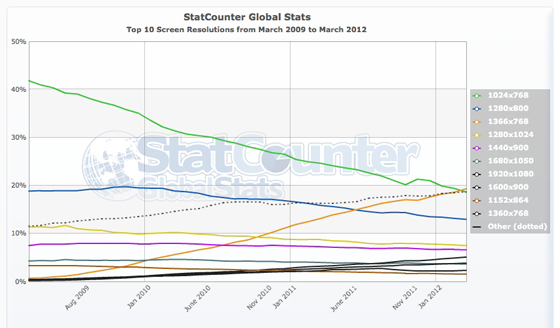 The trends mirror each other almost perfectly, meeting at around 18 percent, even down to a resurgence of 1024 x 768 displays in November last year matching a drop in 1366 x 768 usage. It's worth mentioning that StatCounter separates mobile and desktop browsers for other stats, so for example the 1024 x 768 iPad might not be included here. The dramatic increase in the use of the 1366 x 768 resolution is likely down to its commonness amongst laptops, including the Acer Aspire Timeline Ultra M3 we reviewed a few weeks ago. That's not to say that 4:3 monitors are going away, though: the 18 percent they still hold accounts for around 2.7 billion of StatCounter's 18 billion monthly hits.