Netflix CEO complains about Comcast's data caps again: 'In what way is this neutral?'

Netflix CEO complains about Comcast's data caps again: 'In what way is this neutral?'

Netflix CEO Reed Hastings has made a second Facebook post complaining about the unfair treatment of services like Netflix under Comcast's data caps. Unlike offerings from other streaming services, data used by Comcast's own Xfinity offering doesn't count toward subscribers' caps.

It's no secret Netflix's CEO Reed Hastings thinks Comcast's data caps are unfair. Last month he posted a message on Facebook complaining about how data used by Comcast's Xfinity app for the Xbox 360 doesn't count toward his monthly Comcast data cap, unlike competing service HBO Go. Now Hastings is back on Facebook (post below), saying essentially the same thing, only this time he's cutting straight to the net neutrality point. 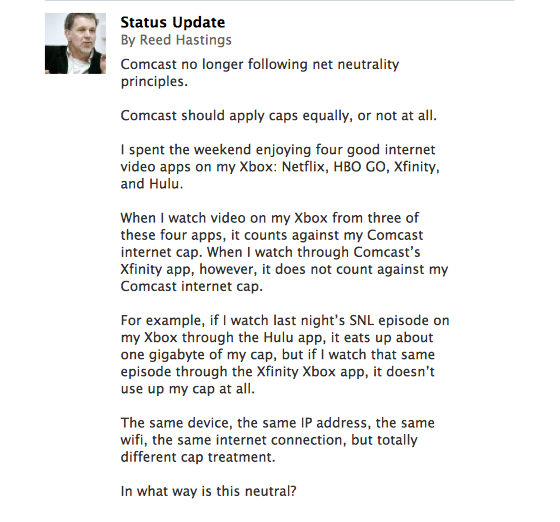 It's unlikely that Comcast is going to stop being selective about its data caps just because of a couple of Facebook posts — it's going to take pressure from Washington, and Netflix recently established its Flixpac public action committee to get just that. We thought the formation of the PAC might move the argument off of the Facebook wall and into the boardroom, but it looks like Hastings is going to keep making the necessary noise online to get his complaint heard. Or at least liked.

More from this stream Comcast's Xfinity app for Xbox 360: a new battleground in net neutrality