Ahead of this week's NAB show, RED president Jarred Land has revealed the first details of the REDray 4K projector and players.

Ahead of this week's NAB show, RED president Jarred Land revealed the first details of two new products from the company. First up is the REDray Projector, which we first caught wind of back in December and is now set to see release this year — it's a 4K laser projector capable of displaying passive 3D at up to 120 fps and will cost under $10,000 up to a 15-foot screen, though it's apparently scaleable to a "large theater" size. Next up is the REDray Player, a 4K media box that can show 120fps video over four HDMI 1.4 ports and lets you download content to an internal HD or stream from flash memory. It'll feature tablet control and proprietary REDPASS DRM. We got to check out the two devices behind glass at RED's booth, and we'll be back as soon as we get a chance to see the enormous projector in action. 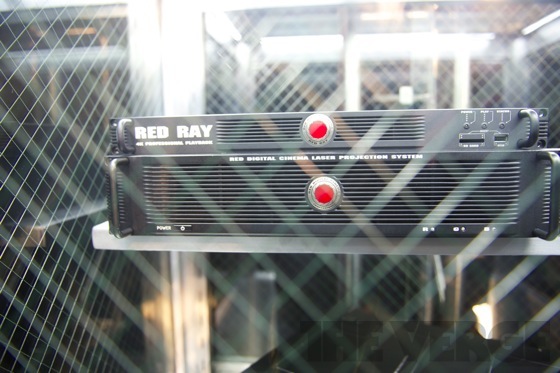