I see your 4K and raise you 6K: how RED is winning the high-res video race

I see your 4K and raise you 6K: how RED is winning the high-res video race

RED is one of many companies showing off its 4K video products at NAB, but RED's already a long way ahead.

Ted Schilowitz, RED's "Leader of the rebellion," was surrounded by a dozen or so journalists and a smattering of RED products that would feel right at home inside a Michael Bay film, but all he wanted to talk about was a sensor. The new Dragon sensor, to be exact, which can be installed into your RED Scarlet or Epic and makes either capable of 6K video recording. The $6,000 sensor is set to be available later this year, and is perfectly indicative of both the insane arms race we're entering with video resolution, and how RED has clearly gained an early lead. 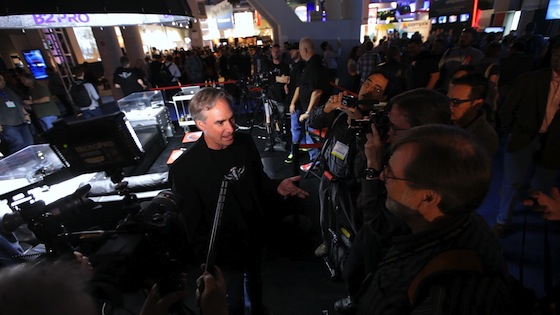 The phrase "obsolence obsolete" was plastered all over the company's booth, and it's a neat summation of what RED is trying to do: sell you a camera, and then update it frequently — with new software and new hardware — so you can always have a top-of-the-line machine. After all, you're not going to want to be stuck on 4K when everyone's onto 6K, right? That's why the Dragon sensor exists: it adds a huge new sensor into your camera, but works with the body, lenses, and accessories you already own. Same goes for the company's new Bomb EVF, or the 9-inch touchscreen LCD, or the awesome Meizler Module that adds all kinds of wireless capabilities to RED cameras. None require an entirely new camera; all just fit into the ecosystem, new elements in the modular system RED has created.

To show off the company's latest tech — the just-announced laser projector in particular — RED screened a Ridley Scott-produced short called "Loom," which was shot entirely on Epic cameras. But before the film began, RED's Jim Jannard came out and almost apologized. He let us know that for the moment, all we'd be seeing was 2K 3D in each eye while we wore our Oakley-brand 3D glasses. In two days, though? In two days it will be 4K in each eye. We were impressed with the footage either way — the 3D induced no headaches or eye-rubbing, and the Epic captured sharp footage in almost pitch-black scenes. The video looked fantastic through the projector, and was as richly detailed and clear as we've quickly come to expect from 4K. 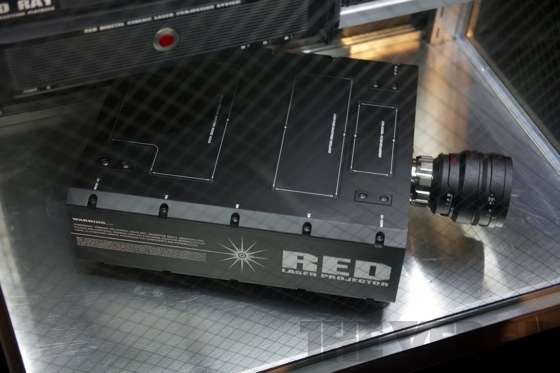 Schilowitz told us that RED's strategy has never had to do with following the market — the company's just trying to make awesome cameras and camera parts. There are few practical reasons to have a 6K camera sensor right now, since even most movie theaters (not to mention RED's own projector) can only go as high as 4K, but the company's committed to staying well ahead of the curve, and to moving quickly.

RED's approach seems like a rare win-win, good for customers and manufacturer alike. Manufacturers and users are both clamoring for 4K products, and RED already has a relatively mature line waiting for them. The modular system, too, seems to be a huge advantage, to the point where it's hard to believe no one's trying to copy it. Customers might purchase things more often, and may even spend more money in the long run, but they can easily create exactly the system they want without waiting through release cycles or having to get used to new hardware. It also means that when every camera manufacturer releases a 4K camera, RED has a 6K model ready. The company does have a history of showing off great products and failing to follow through (remember "3K for $3K?"), but if it can start to ship what it makes it's going to be hard to beat.

There's a new level of competition beginning here at NAB, as we jump to a new resolution and a new way of shooting video, and RED's positioned perfectly to take advantage. Companies from Canon to Sony to BlackMagic are jockeying for the lead in the production, post-production, and display of video at 4K and beyond — but it's hard to think they're not just running toward where RED's been hanging out for, while it moves on to the next one.

Jordan Oplinger contributed to this report.

More from this stream NAB Show 2012: recording the future of video technology