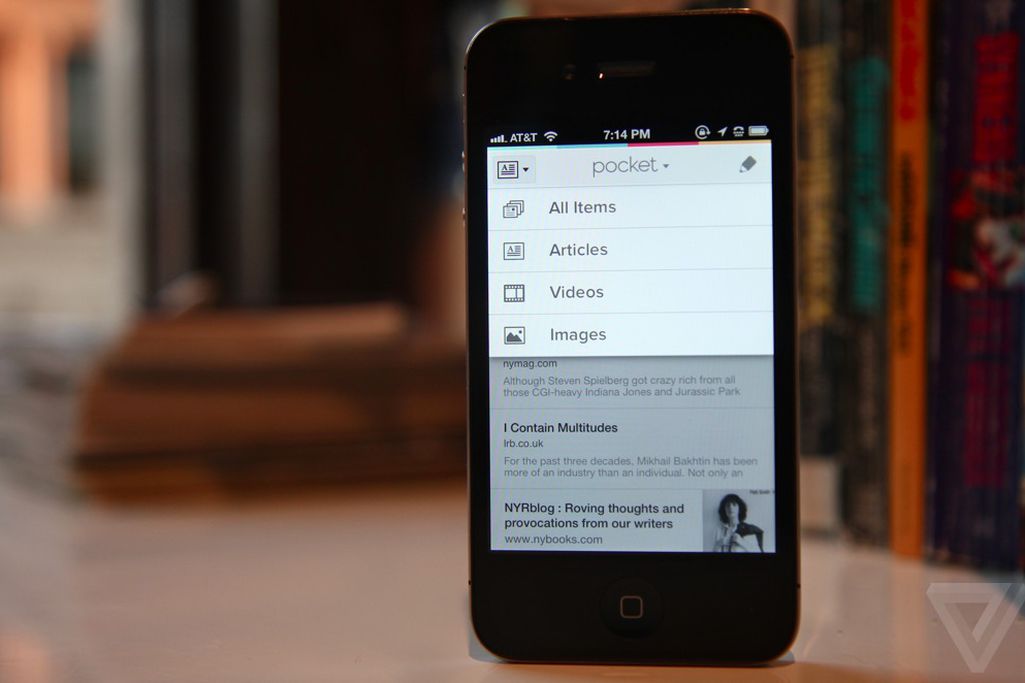 How far we've come since the launch of Nate Weiner's Read It Later Firefox extension and Marco Arment's Instapaper back in late 2007 and early 2008, which helped set off the first wave of "read it later" apps that simply let you save text for reading later. It's an elegant idea that offered readers a respite from the increasingly cluttered web by displaying content stripped of the usual clutter of navigation, buttons, and sidebars (and notably, ads). After the first bookmarklets and extensions, apps from Read It Later, Instapaper, and then Readability appeared, and we've seen a lot of this functionality and design language bleed into everything from Apple's Safari browser to the Longform iPad app.

Today, Read It Later has announced a complete rebranding across its iOS, Android, and Kindle Fire apps. Now dubbed 'Pocket,' the app expands beyond just text and web pages by now offering video and image support. Also notable is the price: Pocket is now free, and many of the "pro" options from the old $2.99 Read It Later Pro have been mixed into the new free app. More importantly, Pocket offers a complete design overhaul across all supported devices. Whether they've helped revitalize long-form reading and writing (or not), these single-tasking reading tools are enormously helpful in getting away from the distractions of the web.

How's Pocket hold up to review? Read on! 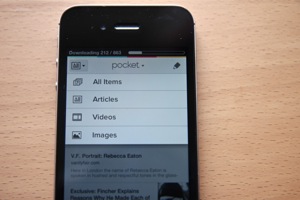 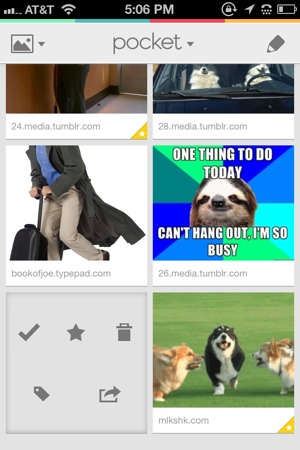 *Which is kind of a futile pursuit. These tools are most valuable as a way to read and view without the distraction of the web, and tagging things to death is a great way to push pixels around for a few more hours instead of getting down to reading. Then again, I've got fifteen tags set up based on some sense of importance, so this advice has clearly done me a lot of good.

From a design perspective, it's been interesting watching these apps develop over the past few years. Perhaps more than than most categories, the addition of any bells and whistles, whether they're animations or just a heavy menu drop shadow, often serve to distract from the apps' core purpose: distraction-free reading. Many of these apps have done a great job avoiding feature bloat during the past few years of development, and Pocket has done a considerable job cleaning up and trimming down its interface, while adding truly useful new features.

On logging into Pocket with your Read It Later account, you'll be greeted with a full list of your articles, which can now be filtered by article, image, and video view. Gone is the black and yellow menu design that was a strain on the eyes; it's been replaced by a brighter and cleaner UI. Like many apps in late 2011 and 2012, Pocket has opted for a relatively "flat" look that serves to put the focus on your saved content instead of glossy bars and drop-shadow heavy overlays. Visually, the app is a mix of clean whites and shades of gray, which helps to emphasize the colorful thumbnails tied to many of the entries. Pull to refresh is also here for syncing with your latest saved articles, and you can swipe on any entry to reveal options to tag, archive, save, trash, or share with other services. Side by side with the old Read It Later app, Pocket is a drastic improvement.

One of Pocket's biggest new features is the ability to filter by content type; you can sort by image, video, and traditional text. Filtering by video reveals a grid of thumbnails of videos you've saved across Vimeo, YouTube, and other services. Most videos saved from the web will automatically get categorized appropriately, but only YouTube and Vimeo videos will display a pop-up player in the app. In practice, we found there are still some sorting issues to work out — I added several Colbert Report videos to Pocket from the web, and it didn't properly sort into video. Additionally, after importing a thousand articles from my Instapaper queue, the videos section was filled with nearly a hundred entries that contained no video. The 'images' option does the same for pictures, though I admit the use case isn't as appealing. Rarely have I saved images to Instapaper or Read It Later for later viewing; pictures usually get sent to my desktop or Evernote for longer term saving and sorting. Still, Pocket's Noah Weiner told me that many Read It Later users do save images, so it was built as a simple filter into the app.

If you're looking for even more options for sorting your saved content, Pocket also has full support for tags*. Tap the pencil button at the top right, select items, and create or add a new tag. Then, you can pull down on the content list to reveal the tag button for sorting by distinct tags. To the left, you'll also find a field for searching by title or URL, but unfortunately Pocket doesn't offer in-text search. The "Pocket" branding at the top reveals more navigation options: home, favorites, archive, options, and help. This part of the UI is a bit list heavy with two drop downs — look to Sparrow for iOS for an elegant way to move users between different lists — but it's easy enough to figure out on your first run through the app.

You'll see these branding changes across the Pocket app, as well as the website; the old Read It Later online experience offered little more than a simple list of your saved articles in a bare bones design. The new design is optimized for the web with a way to toggle between a clean list and gridded layout of your articles, sortable by file type. Plus, it adds bulk editing tools for quickly applying tags and sorting your reading and viewing lists. While you may still spend most of your time with Pocket on a mobile device, it's nice to see the company paying attention to the web experience. 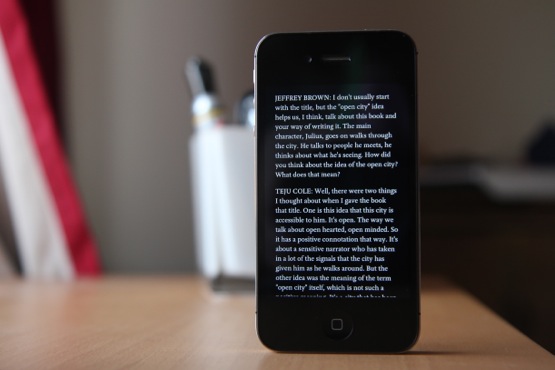 Article view, where you'll be spending most of your time, has also received a much-needed refresh, dropping the glossy bars and odd "next article" toggle. Pocket lets you pull down your article to reveal one tap options for viewing unadorned text or the original web view, as well as a force refresh button. Otherwise, tools, toggles, and menu bars smartly get out of your way. Once you're reading, tapping anywhere in the article completely removes the bottom nav and the iOS menu bar up top so you can fully focus on the text — tapping again brings it back into view.

The bottom navigation bar gives you options to move back to your main list, archive, star, and share. For tweaking display, you'll find a pop-up style panel for tweaking text size, one-tap button for changing between serif and sans-serif fonts, alternating ragged and justified text, brightness, and night mode. If you've filtered by video, Pocket will show you a YouTube or Vimeo player that can be expanded to fullscreen. Building on Read It Later's legacy, Pocket offers the ability to share to everything from Facebook and email to Evernote and Box.com. For pagination fans, Pocket unfortunately doesn't offer any ways to break down articles into distinct pages. It might be a personal preference, but it makes reading long articles much more enjoyable. Weiner confirms that it's coming in a future release, but it won't be available at launch. 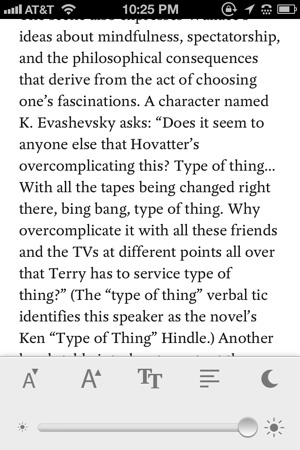 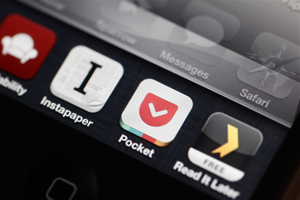 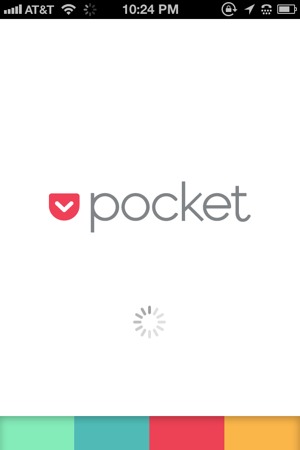 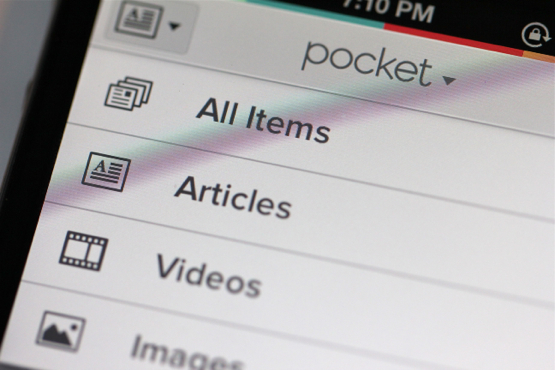 Unlike Readability and Instapaper, Pocket doesn't offer any options for plugging into other social networks — or even the service's own data — for recommendations. If you want to see the most shared Pocket articles or even a list of recommendations, for example, you're out of luck. Fortunately it's not a huge problem, as you've got bookmarklets and Chrome and Firefox extensions, and a quick dive into the firehose of Twitter or YouTube will give you more than enough to read and watch later.

The Pocket team faces a big branding hurdle in the coming months. Read It Later sharing capabilities are built into any apps and web sites, and while Pocket has been working with other apps, "save to Read It Later" buttons will persist in apps until developers push out releases. It's an easy enough fix, but may still result in confusion for some users until the branding is consistent across all apps.

If you're using Read It Later on iOS, this will be a much welcome upgrade, with a faster, cleaner, and much more capable app that is now free. If you're already using Instapaper, it's not a must-switch app, even though Pocket offers easy tools for importing your entire reading list. It's not that Pocket lags behind Instapaper — in fact, Pocket's browsing UI feels fresher and more inviting when compared with Instapaper on iPhone — it's just that it doesn't offer all that much more. For anyone looking to jump into this category of apps for the first time, I can strongly recommend Pocket, where even a week ago I would've hesitated sending a friend to Read It Later.

Longtime users on both iOS and Android will see this as a welcome upgrade. While Instapaper is now a viable option on Android with the recent launch of Papermill, Pocket offers a free download (and subscription-free) app that looks as good as any time-shifted reading app on the platform. Plus, if you've got a Kindle Fire (or Android Phone and iPad, or any variation of iOS and Android device), you'll be able to keep your reading synced across platforms and devices.

You'll find many apps and sites (like Reeder, Flipboard, and Twitter) let you save to most of these read later services, and they all consistently offer starring, archiving, and sharing options. Much of your choice will come down to general design and specific features. If you need pagination, you'll probably stay with Instapaper. Looking for curated content from editors or others? Readability or Instapaper might be the best choice. Otherwise, Pocket is as good a choice as anything else out there, and it comes at a very nice price.