While the faux TED 2023 talk only peripherally touched on the events of Prometheus, this latest video seems to tie in much more directly to the plot of Ridley Scott's upcoming science fiction film. "Happy Birthday David" is a commercial from Weyland Corp. — the eponymous company owned by Guy Pearce's Peter Weyland — advertising its 8th Generation TIPE (Technological, Intellectual, Physical, Emotional - pronounced "type") android played both here and in the film by a blond Michael Fassbender. Because it is a Ridley Scott film, after all, which necessitates at least one android on screen.

The video is fairly soothing throughout — it is supposed to be an advertisement, after all — with David curiously smelling flowers, playing chess with another version of himself, sketching, and even crying. (He's packaged as "an artificial intelligence almost indistinguishable from mankind itself" that's capable of understanding emotion even if he does not feel it — which thankfully means Fassbender will be able to exercise a wider range of expression.) That all said, we couldn't help but notice a few more macabre moments, like the two synthetic skulls in glass cases in the background of the main interview shot, or perhaps this polysyllabic dose of foreshadowing: "I can carry out directives human counterparts might find distressing or unethical."

Ridley Scott's not-an-Alien-prequel (or so everyone involved continues to say) is due out June 8th, which is about 52 days from now. Not that we're counting or anything.

Also, check out a giant advertisement in the Wall Street Journal today for David below the video. Thanks to @johnhamburger for the tip!

And here's the image: 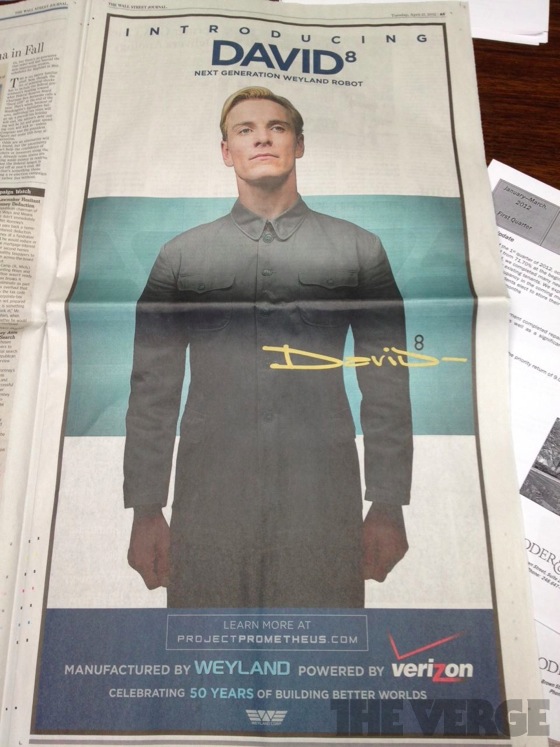